By January Nelson Updated April 29, 2021
Slip into your bathing suit, because it’s time for some shark puns!

If you came across a great white while swimming in the ocean, you would be terrified about losing your guts. But from the safety of land, the only danger you’re in is that these shark puns might make you bust a gut laughing.

2. The last ten times I’ve been to a fancy dress party, I’ve gone as a shark.

3. Did you hear about the aquarium owner?

His shark was worse than his pike.

4. The star attraction at my local aquarium has been repossessed.

Turns out it was a loan shark.

6. What kind of shark is always gambling?

7. How did the hammerhead do on his test?

8. There’s a lot of debate over where the best place to punch a shark is.

Personally, I think it’s the sea. 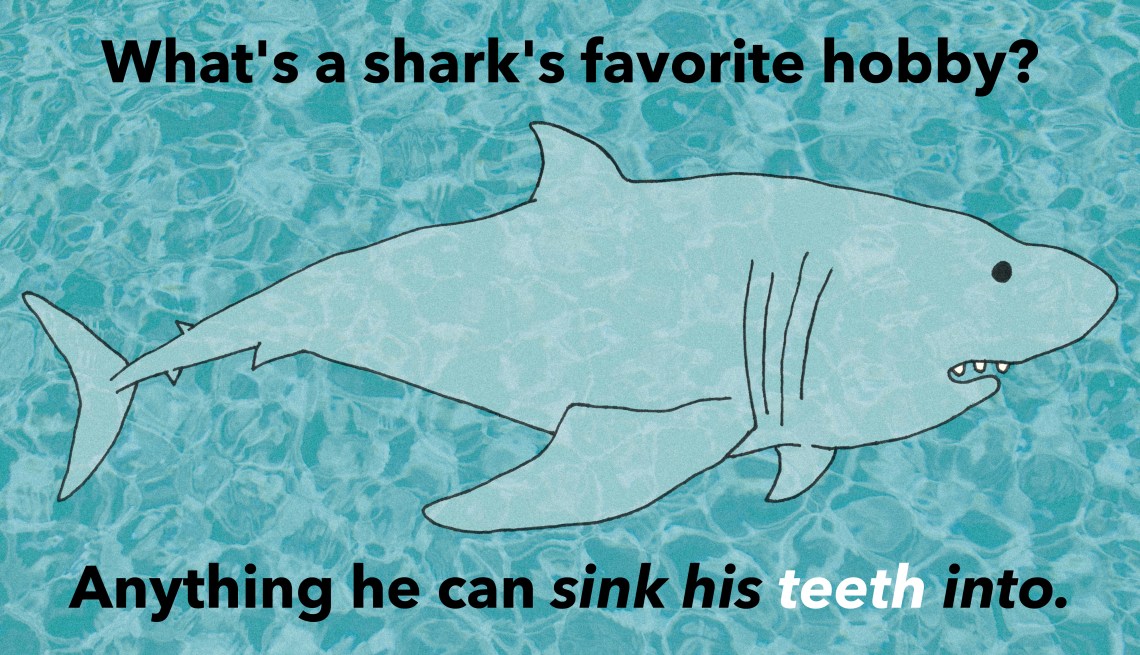 11. What happened when the shark got famous?

He became a starfish.

12. How did the shark plead in it’s murder trial?

13. What do sharks order at McDonalds?

14. Where do sharks go on vacation?

Pleased to eat you.

16. What happened to the shark who swallowed a bunch of keys?

17. What do you get from a bad-tempered shark?

As far away as possible.

18. Why did the shark cross the great barrier reef?

To get to the other tide.

19. What do you get when you cross a parrot with a shark?

An animal that talks your head off.

21. What is a sharks favorite kinda sandwich?

23. What do you call a shark that can’t stop singing “U Cant Touch This?”

24. What did the shark say to the whale?

What are you blubbering about?

25. What do you get when you cross a shark with a snowman?

I’ve been banned from all my local beaches.

28. Why do sharks live in salt water?

Because pepper water makes them sneeze.

29. I’ve just read that according to statistics, donkeys kill more people every year than sharks.

I just laughed. I knew that shark wasn’t going to help him.

31. What was the shark’s favorite Tim Burton film?

33. Who gives sharks presents on Christmas?

33 Underrated Date Spots That Will Make Your Person Swoon