By January Nelson Updated April 29, 2021
These are the best frog puns ever written. Or so I’ve been toad…

Hop on over and read these frog puns, because they are going to jumpstart your day the right way:

Because they eat whatever bugs them.

2. What do frogs do with paper?

3. Why are frogs so good at basketball?

Because they always make jump shots.

4. Why didn’t the frog park on the side of the road?

He was afraid of getting toad.

5. What did the frog say as he looked through the books at the library?

6. What do you call a woman with a frog on her head?

10. What kind of shoes do frogs wear?

No, I always walk this way.

12. What’s the difference between a cat and a frog?

A cat has nine lives but a frog croaks every night.

13. What do you call a frog hanging from the ceiling at Christmas?

14. Why did the frog make so many mistakes?

It jumped to the wrong conclusions.

15. What do stylish frogs wear?

16. What kind of music do frogs listen to?

17. What do you get if cross a frog with some mist?

18. What kind of music do sophisticated frogs listen to?

19. What do you get when you cross a snake and a frog?

At the spawn shop.

22. When I was younger, I dressed up as a frog and robbed a bank.

That was the first time that I Kerm-itted a crime. 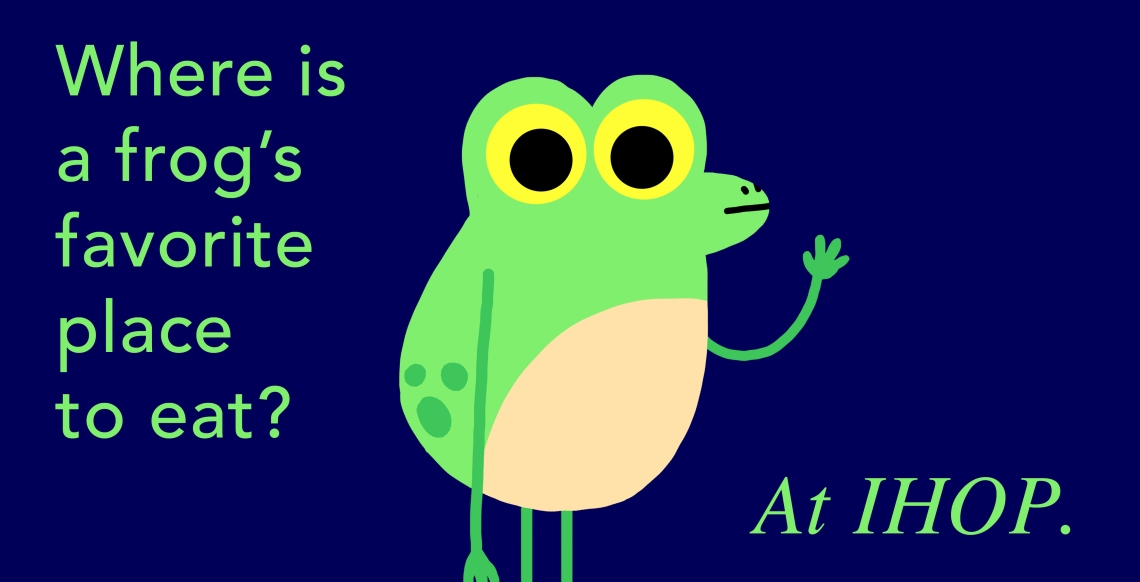 26. What do you get when you cross a frog with a rabbit?

A frog with the chicken pox.

A frog with hiccups.

30. What did the frog dress up as on Halloween?

31. What does a frog order in Mcdonald’s?

French flies and a diet croak.

33. What do you get when you cross an alligator and a poison frog?

35. What did the bus driver say to the frog?

36. What do you get if cross a science fiction film with a toad?

37. Did you hear about the short-sighted frog?

He had to go to the Hopthalmologist.

38. Whats the preferred car of frogs?

A croak and dagger agent.

40. Why did the tadpole feel lonely?

Because he was newt to the area.

One says ribbit ribbit, and thie other one says rub-it rub-it!

44. How does a frog pick his favorite baseball team?

He jumps on the bandwagon.

45. Where do frogs leave their hats and coats?

He wanted to robbit.

48. What do headmasters and bullfrogs have in common?

Both have big heads that consist mostly of mouth!

49. What happens when two frogs collide?

They get tongue tied.

50. What kind of pole is short and floppy?