By January Nelson Updated April 29, 2021
Nothing is cuter than a bunny — and nothing is funnier than these bunny puns.

Bunnies are adorable. They make the perfect pets, because they are quiet, easy to clean up after, and have a relatively long lifespan — not to mention how cute and cuddly they are. Anyone would be happy to have a furry friend like that! 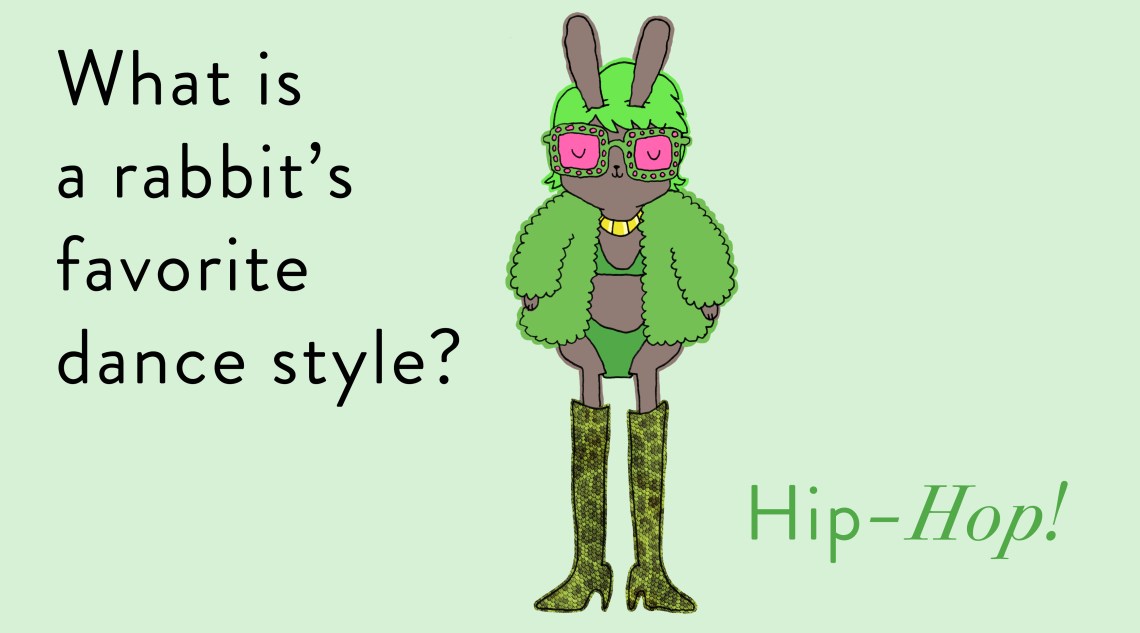 If you are not lucky enough to have a rabbit of your own, you can still enjoy these surprisingly hilarious bunny puns.

1. Did you hear about the rabbit who refused to leave her house? She was having a bad hare day.

2. How do you know you’ve been visited by a possessed rabbit? He leaves deviled eggs.

3. What do you call a rabbit housekeeper? A dust bunny.

4. Where did the bunny groom and bunny bride go after their wedding? On a bunnymoon.

5. What do you call a bunny who was raised in a hotel? An inn-grown hare.

7. Why did the bunny eat the wedding ring? Because he heard it was 18 carrots.

8. What do you call a rabbit with fleas?Bugs bunny

9. How do rabbits travel? By hareplane.

11. What is a rabbit’s favorite dance style? Hip-Hop!

12. What do you call a rabbit who is angry over getting burnt? A hot cross bunny.

13. How can you tell which rabbits are getting old? Look for the grey hares.

14. Why are rabbits so lucky? They have four rabbit’s feet.

15. How many rabbits does it take to change a light bulb? Only one if it hops right to it.

16. What do rabbits put in their computers? Hoppy disks!

17. What do you get when you cross a rabbit with a leaf blower? A hare dryer!

19. Why did the bunny build herself a new house? She was fed up with the hole thing!

20. What do you do if a rabbit keeps pooping in your yard? Take him to a pellet court.

21. Did you hear about the egg laden rabbit who jumps off bridges? He’s the Easter Bungee!

22. Did you hear about the rich rabbit? He was a millionhare!

23. I’m putting an official ban on rabbit puns. They are not bunny anymore.

24. The Easter Bunny won’t be making his usual rounds this year. He’s laid up with a hareline fracture.

25. I bought my rabbit a fancy new hutch. But he doesn’t seem to carrot all. 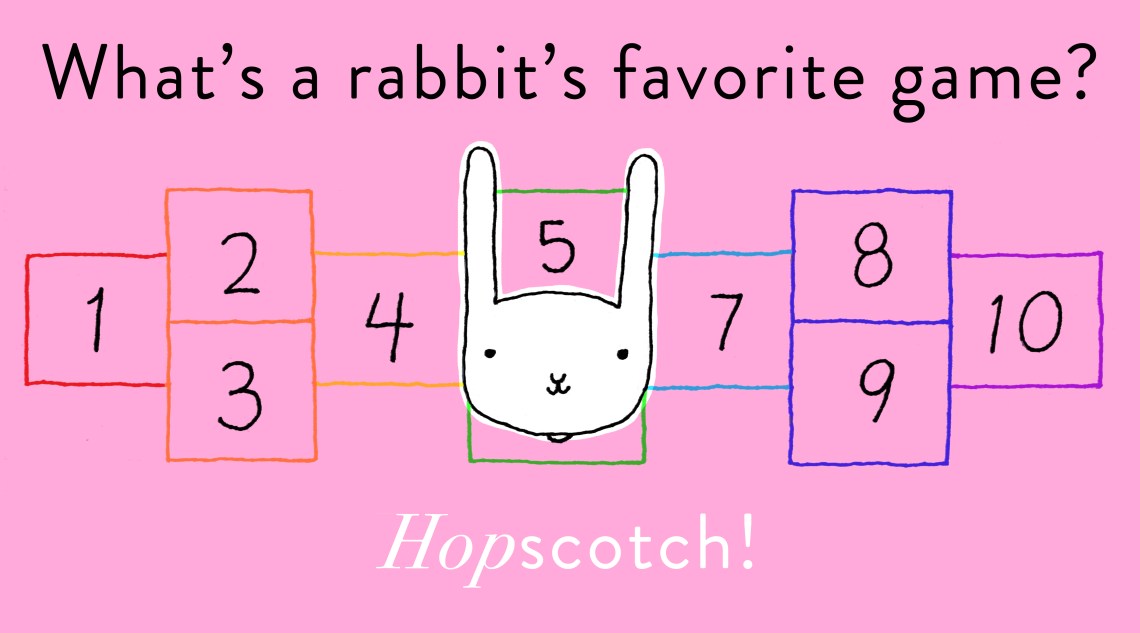 26. What is white and has long ears, whiskers, and sixteen wheels? Two rabbits on Rollerblades!

27. What did the Easter bunny say to the carrot?It’s been nice gnawing you.

28. What do rabbits say before they eat? Lettuce pray.

29. What’s the difference between a healthy rabbit and an odd rabbit? One is a fit bunny, and the other’s a bit funny!

30. What happened when the Easter Bunny met the rabbit of his dreams? They lived hoppily ever after.

31. What happened to the Easter bunny at school? He was eggspelled.

32. Where does the Easter bunny get his eggs? From an eggplant.

33. What did the Easter bunny say about the Easter parade?It was eggs-cellent.

35. What Kind of Books do Rabbits Read? Ones with Hoppy Endings.

36. How do you make a rabbit float? Put soda, syrup, and milk into a glass. Add one rabbit.

37. How did the rabbit become a wrestling champion? It had a lot of hare pins!

38. Did you hear about the woman who complained about her rabbit stew? She said there was a hare in her soup.

39. How did the close race between the rabbit and the tortoise end? It was won by a hare!

40. Did you hear what happened to the Energizer Bunny? He got arrested for Battery.

41. Why did the man wear a rabbit as a hat? He didn’t want anyone to harm a Hare on his head!

42. Why did the bunny bang his head on the piano? He was playing by ear!

43. Why did the bunny cross the road? He wanted to prove he could hip hop!

45. How do you know carrots are good for your eyes? Because you never see a rabbit wearing glasses.

46. Why don’t rabbits get hot in the summertime? They have hare conditioning!

47. How does the Easter Bunny stay healthy? Eggsercise, particularly hareobics!

48. Why did the bald man paint rabbits on his head? Because from a distance they looked like hares!

49. Where do rabbits work? At IHOP restaurants!

50. What do you get when you cross a rabbit with a Spider? A Hare net!

51. What do you call a happy rabbit? An Hop-timist.

52. What do you call a cold dog sitting on a rabbit? A chili dog on a bun!

54. What’s the name of the rabbit who stole from the rich and gave to the poor? Rabbit Hood.

56. Where do rabbits learn how to fly? In the hare force!

57. Why did the rabbit like the adventure? It was a “hare-raising tail.”

58. Why does the rabbit bring toilet paper to the party? Because he is a party pooper.

59. What happened when 100 hares got loose on Main Street? The police had to comb the area.

60. What did the carrot say to the rabbit? Do you want to grab a bite?

61. What do you call two rabbits racing down the road? The fast and the furriest.

63. You must be the Easter Bunny, because you’ve got me all egg-cited.

64. What do you get when you pour hot water down a rabbit hole? A Hot Cross bunny.

65. What do you call a very smart bunny? An egghead.

66. How can you tell where the Easter Bunny has been? Eggs mark the spot.

67. I bought a bunny because everyone needs a friend who is all ears.

68. I used to own a rabbit, but now he’s just some bunny that I used to know.

70. I personally think bunnies are ear-resistible.

71. What did the rabbit say to its wife? No bunny compares to you.

72. What do you call rabbits that live at the North Pole? Cold.

73. Why are bunnies always tired in April? Because they just finished a March.

74. What is a rabbit’s favorite dance? The bunny hop.

75. What do you get when you cross a rabbit with an elephant? An animal who never forgets to eat its carrots.

76. Emo bunnies just do not carrot all.

77. What did the bunny say to its crush? Hey there hop stuff.

78. What do rabbits like to sing? “Every bunny was kung fu fighting.”

79. What does Willow Smith say to her pets? I whip my hare back and forth.

80. What did the Easter Bunny say to its partner? We make one egg-celllent couple.

81. What did the baby rabbit say before his favorite holiday? I carrot wait for the Easter Bunny to visit.

82. Why did the magician have to cancel his show? Because he just washed his hare and couldn’t do a thing with it.