By January Nelson Updated April 29, 2021
If you want to BEE the life of the party, then you should tell these bee puns to all your friends. Buzz!

You might run the other way when you see a bee because you are worried about getting stung, but those tiny little creatures are actually good for the environment. Most of the food we eat relies on their pollination. We wouldn’t be able to survive without them. 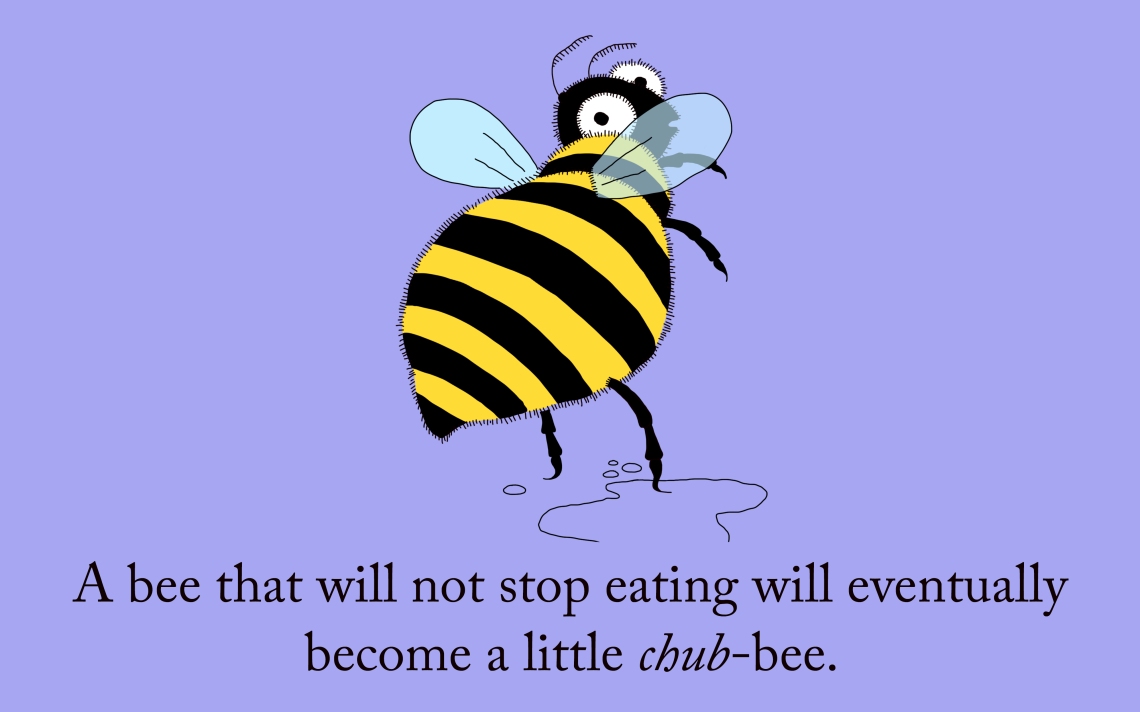 1. Why do bees get married? Because they found their honey!

2. The worst part about getting stung by bees is that the following day you are going to have to take care of those hives.

3. What did one bee say to the other when they landed on the same flower? Buzz off.

4. I know that I have never seen a humming bird but I certainly did see a spelling bee.

5. We always buy our natural honey from the same bees because they always give us their swarm wishes.

6. Bees can fly in the rain if they are wearing their little yellow jackets.

7. When a bee is in your hand, what’s in your eye? Beauty. Because beauty is in the eye of the bee-holder.

8. The younger generation of bees love the musician Sting. 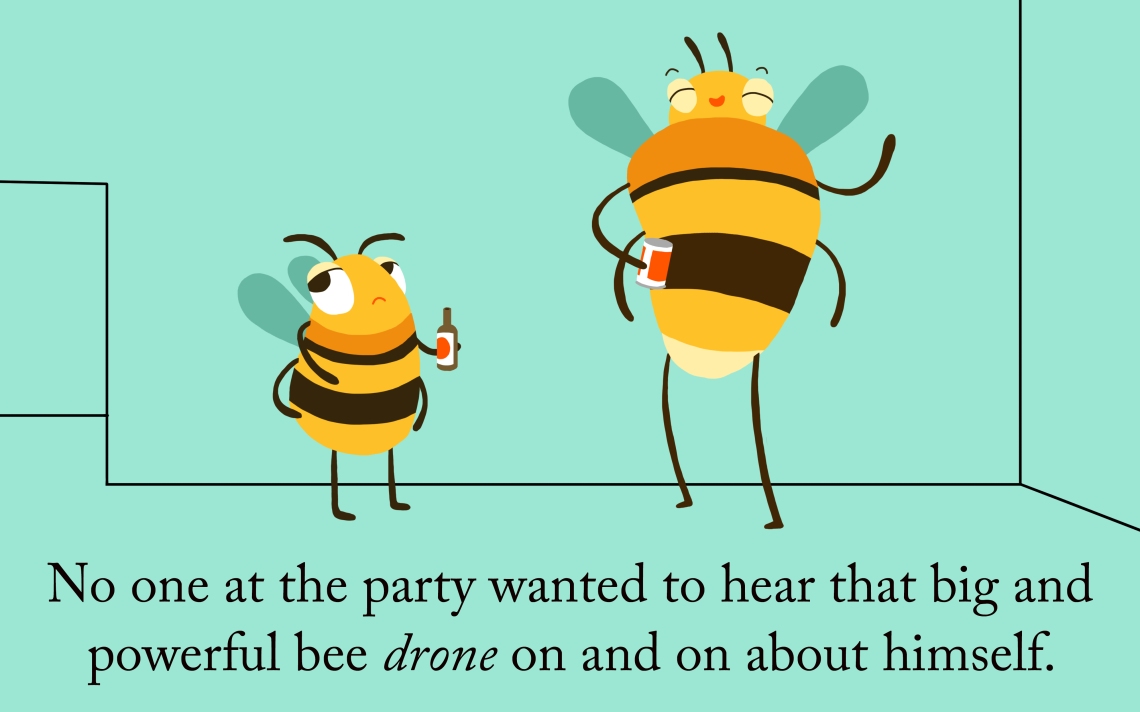 9. Speaking of music, all bees can relate to the pop band the Bee Gees.

10. All bees love the honey-moon part of their relationships more than anything else.

11. The only one who can protect the Queen Bee is her hub-bee.

13. The bee was fired from the barber shop because the only thing he could do was give a buzz-cut.

14. A bee who is good in math knows exactly what a rhom-buzz is.

15. A bee that will not stop eating will eventually become a little chub-bee.

16. A bee styles their hair with a honeycomb.

19. They asked the beekeeper to move his business out of town because he was creating quite a buzz around town.

20. The swarm of teenage bees all loved The Beatles and their “Let it Bee” album.

22. Only bees who are on their best bee-havior get to go to the hive and make honey.

24. As soon as the bees were finished making their hive they threw a big house swarming party for the rest of the group.

25. That bee certainly deserved the promotion at work, he was always so buzzy on the job.

26. That bee is talking too quietly, it must be a mumble-bee!

27. The bee who loved to fly backwards would often be heard going zzub zzub zzub.

29. When you cross a doorbell and a bee you wind up with a hum-dinger.

30. That single bee finally got married because he found his honey.

31. The worker bee decided to take a vacation to Stingapore last year.

32. The bee that resides in America is also known as a USB.

33. Remember, bee puns are good for your health, they give you a dose of Vitamin Bee!

35. Bee children take the school buzz to get to school.

38. Just bee yourself. You’ll think of something to come up with.

40. What is the last thing to go through a bee’s mind when it hits a windshield? Its stinger.

42. What happens when a bee burps near the queen? It gets a royal pardon.

44. On the first day of class, bee students are given a sylla-buzz.

45. What is a swarm of really small queen bees called? The royal wee.

46. These bee puns are just winging it.

48. The one item the bees never forget to bring to the beach are their frisbees.

49. Bee puns aren’t that great. I don’t get what all the buzz is about.

50. The bee bank robber would always tell the bank tellers “Your honey or your life.”

51. A combination of a bumble bee and a race dog will give you a Greyhound Buzz.

52. Why did the bee want to use the phone? To say hi to their honey.

53. Bees love the summer because it is very swarm outside.

54. The only thing more dangerous that being with a fool is fooling with a bee.

55. Wasp are you talking about?

56. A Queen Bee will only eat hum-burgers at Burger King.

57. The baby bee was affectionately known as a little hum-bug.

58. The talkative bee earned a reputation as being blab-bee.

59. The little bees are always humming because they forgot the words to the song.

60. When a bee writes a sonnet, they’re waxing poetic.

61. The little bees favorite type of candy is of course bumble gum. 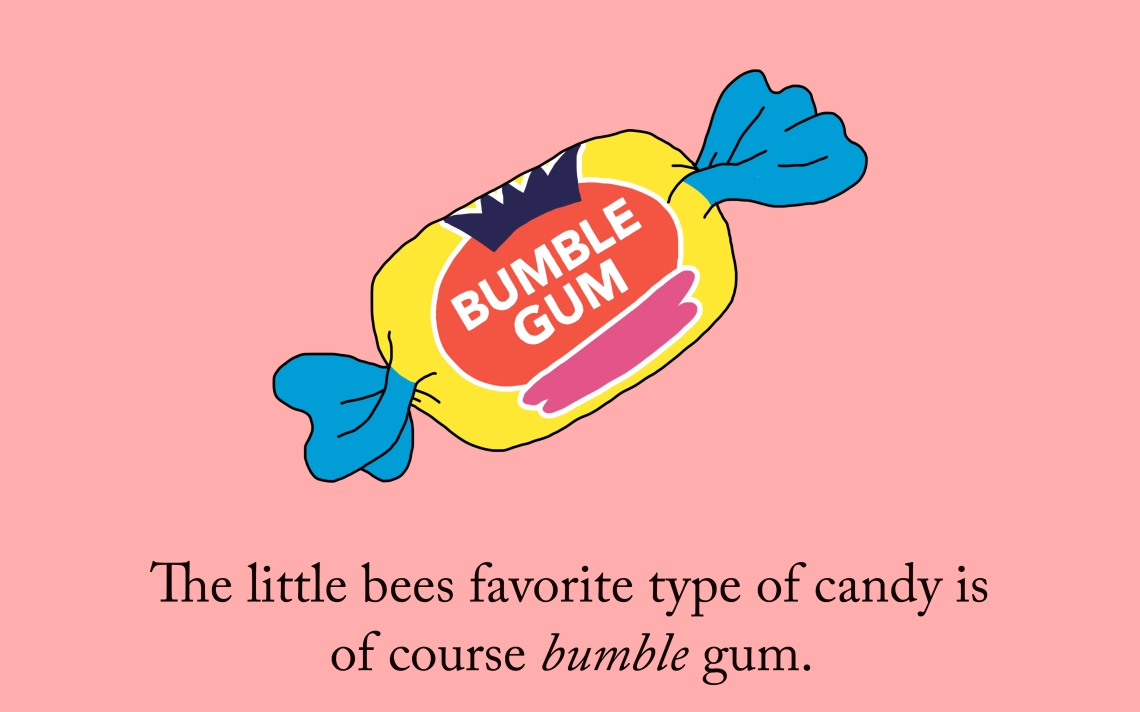 62. Female bees have a particular affection for ru-bee rings.

64. The killer bee was so effective because he used a large buzz-ooka.

65. The teacher kept telling the naughty bee to bee-hive himself or she would call in his parents.

66. A bee’s favorite novel is the Great Gats-bee.

67. Bees that are born in the month of May are considered to be May-Bees.

68. A wasp is nothing more than a wanna-bee.

70. Did you know that bears without ears are commonly referred to as B’s.

71. The father bee was in such great shape for his age because he always took his vitamin-bee.

73. When the bee went to the blood bank, he asked if they were in need of any bee positive blood.

74. The male bee was such a romantic, he kept pollen in love with all the female bees

75. A bee that’s been put under a spell has been bee-witched!

76. After the bee scored the winning basketball shot, the entire team wanted to give him a hive-five.

77. Never play hide and seek with the swarm because they will always wind up bee-hind you.

78. Roses are red, violets are blue, killer bees are all over you.

83. The bees went on strike because they wanted more honey and less working flowers.

100 Funny Animal Jokes That Will Make You Laugh Wildly