By Erin Cossetta Updated April 29, 2021
Owl puns are a hoot! These are the best owl puns on the internet. Add your favorite owl pun in the comments.

Did you hear about the owl party?

It was a hoot.

Did you hear about the birds of prey on black Friday?

It was a free for owl.

What is an owl’s dream occupation?

Why doesn’t an owl study for a test?

They prefer to wing it.

Why did the owl join Tinder?

He didn’t want to be owl by himself.

What do you call a smartass bird of prey?

A know it owl.

Why do owl babies take after their dad?

Where do owls go on their honeymoon?

Did you hear the gossip about the owl who hooked up with his boss?

I won’t tell you hoo.

What did the owl say to the judge?

What do you call an owl who knows how to do magic tricks?

Why shouldn’t you tell an owl your secrets?

What did the owl booty text his girlfriend?

I’ve been thinking about you owl night long.

Why do owls make such bad baseball players?

Their hits are always fowl. 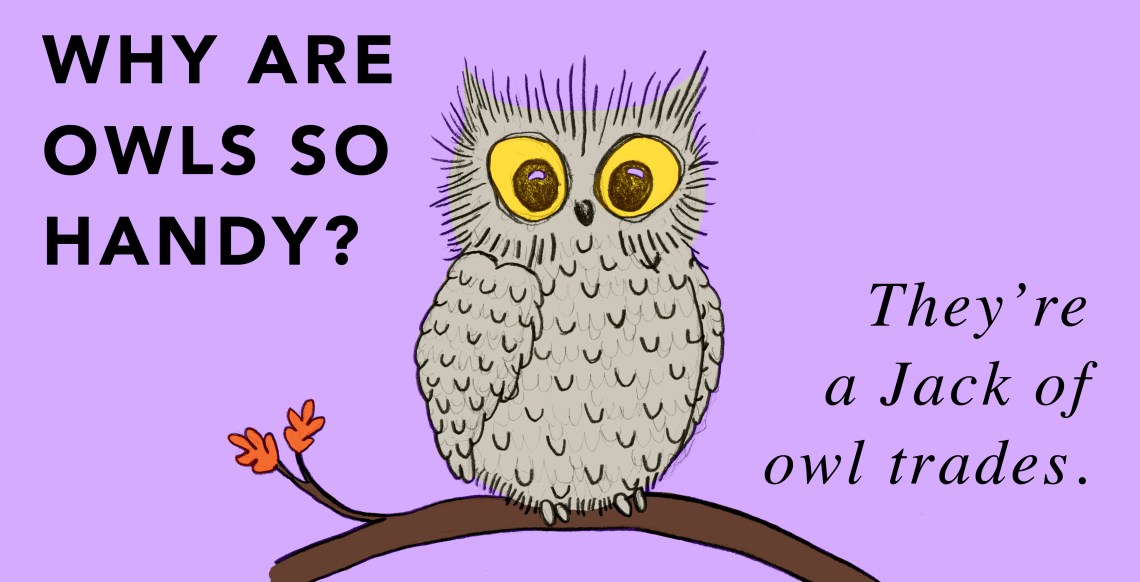 What did the owl’s valentine say?

What kind of gang violence is common among owls?

A drive by hooting.

What is an owl who has been caught called?

What is an owl’s favorite Beatles’ song?

Owl you need is love.

What is a medieval owl called?

Why are owls so good at math?

Why do owls always by mystery novels?

Why do owls shower so often?

So they don’t smell fowl.

Did you hear about the birds of prey who opened up a resort?

It was for owl seasons.

What was the owl’s favorite Whitney Houston song?

Add your favorite owl pun in the comments!