By January Nelson Updated April 29, 2021
If it’s too much pressure to think of your own jokes, then here are the funniest rock puns that you can throw at all your friends.

Are you ready to laugh until your bed rocks? Then enjoy these rock puns! Don’t take them for granite!

1. What do you call a rock that never goes to school?

2. Why did the tectonic plates break up?

It wasn’t her fault, but there was just too much friction between them.

3. What do you do with dead geologists? 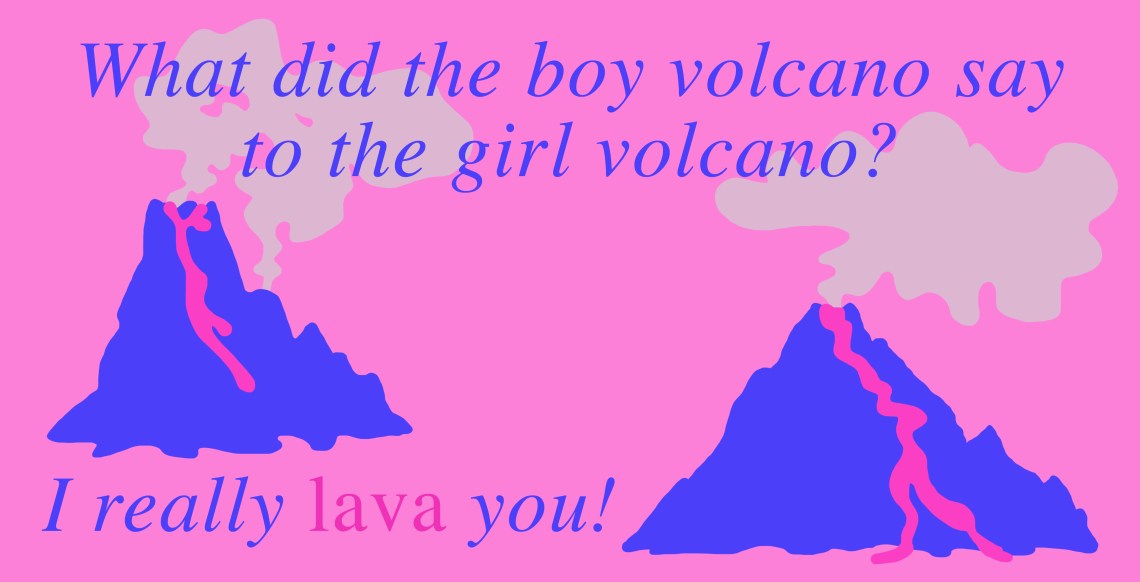 5. Why was the sedimentary rock extra cheap?

Because it was on shale.

6. Who is a geologist’s favorite band?

7. Did you hear about the geologist who was reading a book about Helium?

He just couldn’t put it down.

8. What did the metamorphic rock say during the test?

This is too much pressure!

9. How did the geology student drown?

His grades were below C-level.

In rocking chairs, of course!

12. Bill’s house was rocking last night, everyone got stoned.

13. What did the boy volcano say to the girl volcano?

I really lava you!

14. When were rock puns the funniest?

During the stone age.

15. What did the motivational speaker say?

17. What kind of magazine does a rock like to read?

They’re always in their pure form.

19. Watson: Sherlock, what type of rock is this amazing specimen?

20. What did the rock say to the word processor?

21. Why shouldn’t you lend a geologist money?

22. What do you call a can of pop found in a conglomerate?

23. You want to hear the best rock puns?

Give me a moment and I’ll dig something up.

24. Why shouldn’t you let a geologist drive your car?

Because they get hammered and stoned.

25. Why are geologists good at stand up comedy?

26. This rock was magma before it was cool.

27. Why shouldn’t you lend a geologist money?

28. Why are geologists so good in school?

They take nothing for granite.

29. Did you hear about the geologist who went to jail?

He was charged with basalt and battery.

30. What did the geologist say when his doctor said he needed a colon exam?

31. Why did the fold get arrested?

Because it was caught rolling a joint.

32. What happens when you keep reading geology jokes in your free time?

You know that you have really hit rock bottom.

33. What do you call a periodic table when the gold is missing?

34. What did the teenage rock say after failing its drive test?

I don’t want to talc about it.

35. Why are geologists great dates?

They are very sedimental.

36. Why are geologists no fun at parties?

37. Why did the geologist go on a date to the quarry?

He wanted to be a little boulder.

38. Why was the geologist always depressed?

He had a hard rock life.

39. Why was the sedimentary rock so cheap?

It was always on shale.

40. What did Darth Vader tell the geologist?

May the quartz be with you!

41. Why are geologists never hungry?

They lost their apatite.

42. Why are geologists great dates?

They can make your bedrock.

43. Did you hear about the geologist who got divorced?

He was taking his wife for granite, so she left him.

Because it contains alkynes of people.

46. What did the gold say to the pyrite?

You’re a fool and a fake!

47. What do you call a benzene ring where the iron atoms replacing all of the carbon atoms?

48. Why should you never expect perfection from geologists?

Because they all have their faults.

49. What did the diamond say to its friend copper?

50. What is black, purple, blue, yellow and white?

Sugilite, sardonyx and opal all fighting over a gumball.