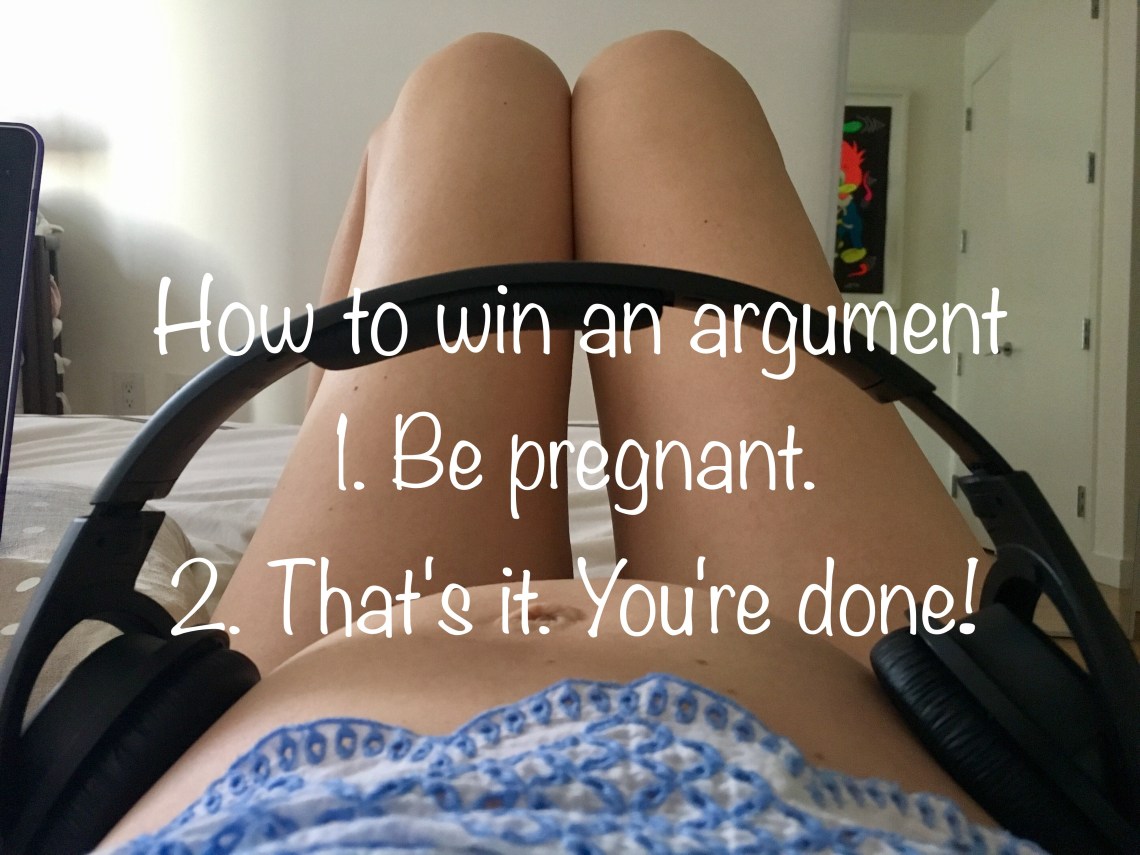 1. What’s the difference between a nine-month pregnant woman and a supermodel?

Nothing—if the pregnant woman’s partner knows what’s good for them.

2. How do you win an argument?

Be pregnant. That’s it! You’re done.

3. How did Burger King get Dairy Queen knocked up?

He forgot to wrap his whopper!

With any luck, right after he graduates college.

5. What’s the difference between a pregnant woman and a terrorist?

You can negotiate with a terrorist.

6. The more pregnant I get, the more strangers smile at me. Why?

Because you’re fatter than they are, obviously.

7. What would be different if men were the ones who got pregnant?

Maternity leave would last for two years with full pay and morning sickness would rank as the nation’s #1 health problem.

Dress her up as an altar boy.

9. What part of biology class do pregnant women fear?

10. What do a pregnant woman and a burned cake have in common?

You should’ve taken it out earlier.

13. Are you having a natural childbirth?

Why, yes—in that it’s completely natural to take drugs to alleviate excruciating pain!

14. What’s the difference between a pregnant woman and a lightbulb?

You can unscrew a lightbulb.

15. What’s the most common pregnancy craving?

For men to be the ones who get pregnant.

16. When’s the best time to get an epidural?

Immediately after learning that your girlfriend is pregnant.

17. Is there anything in particular I should avoid in the aftermath of childbirth?

18. My childbirth instructor says it’s not pain I’ll feel during labor, but pressure. Is that right?

Yes, in the way that a tornado might be referred to as merely an air current.

20. What do you do when your daughter, who claims she hasn’t slept with anyone, gets pregnant?

You get a womb with a view.

22. How is being pregnant is like being a kid again?

There’s always someone telling you what to do.

23. What’s the weirdest stage of pregnancy?

When people aren’t sure whether to congratulate you or buy you a gym membership.

24. What do people really mean when they say “congrats” on your pregnancy?

Nice work doing what teenagers manage to do by accident every day!

And the one percent that manages to get pregnant while taking birth control.

The Unedited Truth About Trying To Get Pregnant In 2020

20 Important Things Every Diabetic Should Know About Pregnancy