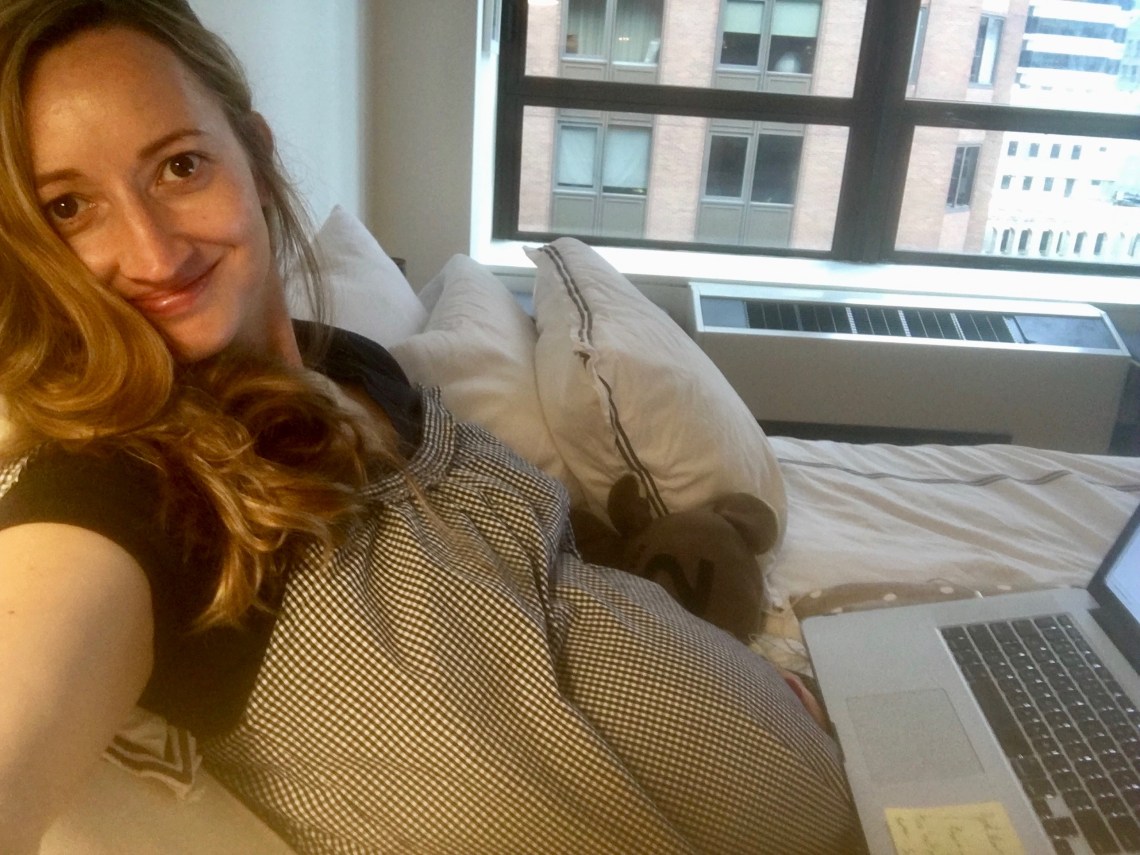 1. That pregnancy is actually a 40-week long event, which is a whole lot closer to 10 months than 9 months.

2. That (in New York City, at least) it’s super hard to find an OBGYN who takes insurance rather than making you pay upfront and wait for reimbursement for all of the pregnancy related costs you’ll incur over the course of a year.

3. That your clothes will stop fitting as early as 6 weeks in!

4. Because even if you’re not quite showing yet, you’re retaining water like crazy and your whole body is kind of bloated from the beginning and things are slowly but surely changing from forehead to ankles.

5. But you won’t actually look pregnant to anyone but yourself standing naked in front of the mirror until well past the halfway mark.

6. As a result, your pregnancy will really only seem real to you for awhile.

7. Not even your partner will fully register what’s going on until you’re visibly knocked up.

8. So you might have to remind them to be particularly nice, seeing that you’re literally building their baby every second of the day—and you may be feeling particularly tired and/or irritable and/or meh at any given moment as a result—even if it doesn’t look like anything is all that different.

9. That it will probably just look like you have a massive food baby to outsiders for several months early into the whole experience.

10. Until your faux food baby starts to resemble an actual baby-stuffed belly, you can’t expect strangers to smile at you kindly or give up their seat for you on the bus or subway.

11. Even once you’re without-a-shred-of-doubt knocked up, you can’t expect strangers to give up their seat for you so readily because the world is populated by some very conveniently clueless individuals who will happily ignore you rather than sacrifice their own comfort.

12. That the first 12 weeks (when the chances of miscarrying are higher and most people don’t announce to the world that they’re pregnant) will feel like you’re stuck in some kind of pregnancy closet.

13. That your immune system is compromised throughout pregnancy (so your body doesn’t attack the embryo / fetus / baby like it’s some kind of infectious disease), which means that you’re more likely than ever to catch something.

14. That being sick while pregnant SUCKS ROYALLY because you’re not supposed to take any meds—not even the over-the-counter kind—lest they taint the human parasite inside your womb.

15. That random people like your dentist’s assistant are harboring some very strong opinions about pregnancy—for instance, that it should obviously be illegal to serve pregnant women alcohol in bars (never mind the fat-shaming catastrophe that would clearly lead to)—and they will volunteer these thoughts upon noting your bump, assuming you’re interested.

16. That once the second trimester hits, you will have to pee pretty much always.

17. That you might have to pack an extra pair of underwear in your handbag, lest you pee your pants accidentally while laughing, coughing, or sneezing—a real thing that happens more often than you’d think.

18. That your boobs will become engorged as early as the first trimester.

19. So you’ll probably need new bras way before your baby’s born, whether or not you plan to breastfeed.

20. And those giant boobies will probably feel sore rather than make you feel like a voluptuous superstar.

21. That breastfeeding is another topic people feel super strongly about so you’ll be fielding lots of random people’s opinions on the issue as soon as they note your bump.

22. That your nipples will probably get bigger. And darker!

23. That your ass will likely grow a few sizes, too. And your significant other will probably point this out to you affectionately at some point, as if you hadn’t already figured it out for yourself.

24. That your belly button will eventually invert.

25. That your pregnancy body will cause you serious outfit selection distress on many many mornings.

26. Because even if you choose to invest in some maternity clothes, the way those pieces fit will inevitably change as your body changes continuously over the course of 40 weeks.

27. That you will not fully appreciate how awesome your pre-pregnancy body was until you’re skimming old naked photos of yourself at 20 weeks or so.

28. That whether or not you feel all that awesome about it, your significant other is biologically programmed to worship your pregnant bod at every stage, which will in turn strike you as wonderful, fascinating, and royally annoying.

29. That you can’t expect your body to snap back to its former shape post pregnancy because some of the changes pregnancy ushers in are actually permanent.

30. That stretch marks and spider veins can’t be avoided through diligent, nightly oiling of your midsection because they’re genetic for the most part.

31. That you might very well start leaking colostrum (a form of breast milk) long before your due date.

32. That “pregnancy brain” is a real thing, especially in the third trimester, at which point your baby is basically stealing 20 percent of your blood flow.

33. That your water might not break when you go into labor like every single movie featuring a pregnancy plotline would have you believe.

34. That you can have contractions sporadically for several weeks leading up to your due date.

35. There’s even something known as a Braxton Hicks “practice contraction,” which is your body’s way of prepping for the big day.

36. That when the baby kicks, it’s super cute and reassuring but can also be SUPER uncomfortable, especially as the little sucker gets bigger and bigger.

37. That your belly will constantly change shape as the baby re-positions itself, which can be super cool but also creepy at times.

38. That something called a mucus plug—a giant booger blocking the cervical canal, essentially—will probably come out of your vagina in the days leading up to birth.

39. That strangers really will want to touch your belly.

40. And there’s definitely a certain type of dude who fetishizes pregnant women.

41. That men and women of all ages will want to share their birth stories and parenting tips with you—even if their kid is, like, 20.