Considered to be the most influential physicist of the 20th century, Albert Einstein, was born on March 14th, 1879 in Württemberg, Germany. His fascination with the world of physics began when he was only a boy, questioning why the needle on a compass always points North. Figuring out the “why” of things always seemed to loom in his mind, leading him to develop a multitude of pivotal theories such as the special and general theories of relativity. In 1921 Einstein gained the status of being a Nobel Peace Prize winner due to his ground-breaking quantum mechanics work on the photoelectric effect.

Aside from his accolades in physics, he lived a life full of travel, advocacy, and love. On January 6th, 1903 he married his first wife Mileva Maric with whom he bore and raised two children, Hans Albert and Eduard. Eventually, due to his travels, his marriage failed, resulting in a divorce and for him to move onto his second wife, Elsa Löwenthal. Einstein was a lifelong pacifist and spent his later years traveling to many countries around the world to speak about his work and expand his mind. His discoveries revolutionized physics, leaving a profound impact on our society for decades following his death on April 4th, 1955. In 1988 an Albert Einstein archive was created at the Hebrew University of Jerusalem in Jerusalem, Israel to honor the famous scientist. Get inside the mind of a theoretical physicist by discovering which Einstein quote is the most inspiring out of the famous Albert Einstein quotes below! 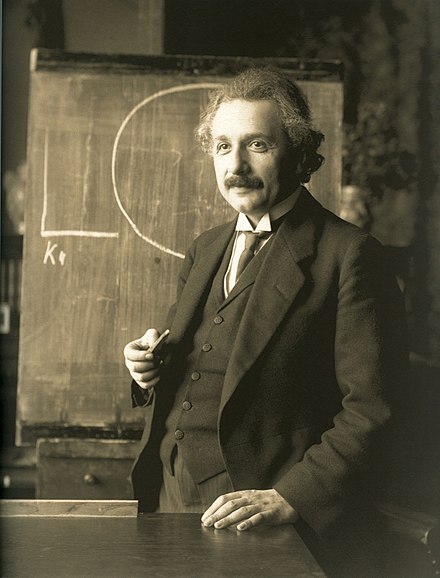 “Imagination is the highest form of research.”

“To raise new questions, new possibilities, to regard old problems from a new angle, requires creative imagination and marks real advance in science.”

“Great spirits have always found violent opposition from mediocre minds. The latter cannot understand it when a man does not thoughtlessly submit to hereditary prejudices but honestly and courageously uses his intelligence.”

“The important thing is not to stop questioning. Curiosity has its own reason for existing. One cannot help but be in awe when one contemplates the mysteries of eternity, of life, of the marvelous structure of reality. It is enough if one tries to comprehend only a little of this mystery every day.”

“A little knowledge is dangerous. So is a lot.”

“The true sign of intelligence is not knowledge but imagination.”

“Human beings can attain a worthy and harmonious life only if they are able to rid themselves, within the limits of human nature, of striving to fulfill wishes of the material kind.”

“Look around at how people want to get more out of life than they put in. A man of value will give more than he receives.”

“Compassionate people are geniuses in the art of living, more necessary to the dignity, security, and joy of humanity than the discoverers of knowledge.”

“Anger dwells only in the bosom of fools.”

“I believe in one thing, that only a life lived for others is a life worth living.”

“Imagination is everything. It is the preview of life’s coming attractions.”

“No one here at the Technikum is up to date in modern physics? I have already tapped all of them without success. Would I too become so lazy intellectually if I were ever doing well?”

“The only source of knowledge is experience.”

“I cannot imagine a God who rewards and punishes the objects of his creation and is but a reflection of human frailty.”

“Reading, after a certain age, diverts the mind too much from its creative pursuits. Any man who reads too much and uses his own brain too little falls into lazy habits of thinking.”

“The difference between stupidity and genius is that genius has its limits.”

“We should take care not to make the intellect our God; it has, of course, powerful muscles, but no personality.”

“The world as we have created it is a process of our thinking. It cannot be changed without changing our thinking.”

“God is subtle but he is not malicious.”

“Any intelligent fool can make things bigger, more complex, and more violent. It takes a touch of genius, and a lot of courage, to move in the opposite direction.”

“Two things are infinite: the universe and human stupidity; and I’m not sure about the universe.”

“Unthinking respect for authority is the greatest enemy of truth.”

“Whoever is careless with the truth in small matters cannot be trusted with important matters.”

“I never made one of my discoveries through the process of rational thinking.”

“The whole of science is nothing more than a refinement of everyday thinking.”

“I speak to everyone in the same way, whether he is the garbage man or the president of the university.”

“Love brings much happiness, much more than pining brings pain.”

“Science without religion is lame, religion without science is blind.”

“It is the supreme art of the teacher to awaken joy in creative expression and knowledge.”

“A calm and modest life brings more happiness than the pursuit of success combined with constant restlessness.”

“Without deep reflection, one knows from daily life that one exists for other people.”

“Intellectual growth should commence at birth and cease only at death.”

“A table, a chair, a bowl of fruit, and a violin; what else does a man need to be happy?”

“True art is characterized by an irresistible urge in the creative artist.”

“The ideals which have lighted me on my way and time after time given me new courage to face life cheerfully, have been truth, goodness, and beauty.”

“The most powerful force in the universe is compound interest.”

“Be a loner. That gives you time to wonder, to search for the truth. Have holy curiosity. Make your life worth living.”

“The gift of fantasy has meant more to me than my talent for absorbing positive knowledge.”

“The intuitive mind is a sacred gift and the rational mind is a faithful servant. We have created a society that honors the servant and has forgotten the gift.”

“The hardest thing to understand in the world is the income tax.”

“The search for truth is more precious than its possession.”

“Creativity is intelligence having fun.”

“I believe that a simple and unassuming manner of life is best for everyone, best both for the body and the mind.”

“If you want to live a happy life, tie it to a goal, not to people or things.”

“If I were not a physicist, I would probably be a musician. I often think in music. I live my daydreams in music. I see my life in terms of music.”

“My religion consists of a humble admiration of the illimitable superior spirit who reveals himself in the slight details we are able to perceive with our frail and feeble mind.”

“A happy man is too satisfied with the present to dwell too much on the future.”

“Few people are capable of expressing with equanimity opinions which differ from the prejudices of their social environment. Most people are even incapable of forming such opinions.”

“We will not change the hearts of other men by mechanisms, but by changing our hearts and speaking bravely… When we are clear in heart and mind – only then – shall we find courage to surmount the fear which haunts the world.”

“Life is like riding a bicycle. To keep your balance, you must keep moving.”

An Apology For Being Your Almost

9 Things I Want My Former Best Friends To Know