Walt Disney was a TV and film producer, a pioneer of legendary animation films and cartoon characters, and the creator of the beloved theme parks, Disneyland and Disney World. Disney was a man with a dream. With his imagination, his courage, and his talents, he created a magical world for everyone to explore and call home.

Disney was born in 1901 in Chicago, Illinois, and was one of five children. His childhood was spent drawing and painting illustrations and when he was in high school, he took drawing and photography classes and was even a contributing cartoonist for his school’s newspaper. When he was 18 years old, Disney moved to Kansas City and begun a career as an artist for a newspaper. He worked at Kansas City Film Ad Company, where he used his animation for commercials. Along with working there, Disney decided to open his own animation business: Laugh-o-Grams, a series of cartoons and fairytales (both live action and animation). Unfortunately, it was unsuccessful and he went bankrupt.

Walt Disney, his brother Roy, and a cartoonist Ub Iwerks moved to Hollywood in 1923 and developed what we all know and love as Walt Disney Studios. He co-founded the Walt Disney Company and the Walt Disney Studio with his brother, Roy. The earliest cartoon character–even before Mickey Mouse–was Oswald the Lucky Rabbit, but the idea was stolen by one of his employees and he was forced to create something new. During that time, when sound has just made its way into film, Disney voiced a character known as Mickey Mouse, in his very first successful film, Steamboat Willie. He even won his first Academy Award for the creation of Mickey Mouse! It wasn’t until 1929 that he created Mickey’s friends, Minnie, Donald Duck, Goofy, and Pluto. His first full-length film was Snow White and the Seven Dwarfs which won 8 Oscars in 1937. He had produced over 100 films during his life, all incredibly successful and loved.

The Disneyland theme park opened July 1955 in California and it quickly became a place for children and families to create fond memories together, meet their favorite characters, and explore their curiosity and imagination. Disneyland was influencing young lives and tourists from all over and it became so popular that Disney decided to branch out and expand the Disney theme park to Tokyo, Paris, Hong Kong, and Orlando, Florida. The Florida location was known as Disney World, and it had an additional “world” of EPCOT, visitors could experience cultures, art, and food from all over the world. Unfortunately, Disney died while EPCOT was still under construction, and so his brother carried on to finish the plans. Disneyland and Disney World have Magic Kingdom, Animal Kingdom, Adventureland, Fantasyland, and so much more. A Disney vacation is ideal for children and even adults who believe in the timeless magic of Disneyland and Disney World.

Before Disney died from lung cancer in 1966, he had married a woman named Lillian and they had two kids, Sharon and Diane. His kids and grandkids will carry on the Disney name and legacy. Walt Disney will go down in history for his impact. With that being said, here are some inspirational quotes from Disney himself, as well as quotes from the beloved Disney movies. 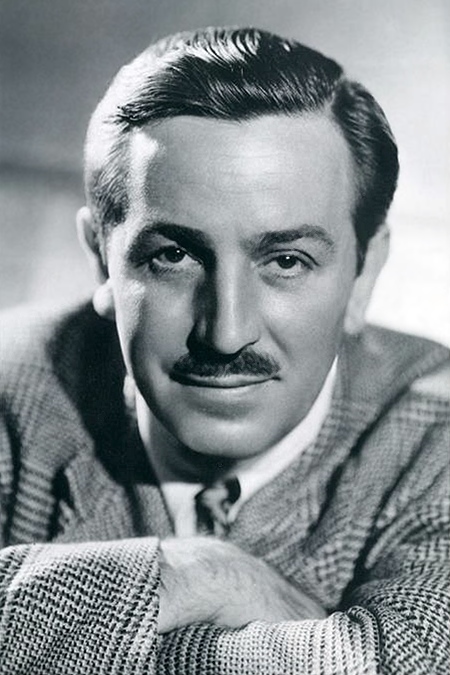 “I am interested in entertaining people, in bringing pleasure, particularly laughter, to others, rather than being concerned with ‘expressing’ myself with obscure creative impressions.”

“I never called my work an ‘art’. It’s part of show business, the business of building entertainment.”

“Movies can and do have tremendous influence in shaping young lives in the realm of entertainment towards the ideals and objectives of normal adulthood.”

“Get a good idea and stay with it. Dog it, and work at it until it’s done right.”

“Crowded classrooms and half-day sessions are a tragic waste of our greatest national resource – the minds of our children.”

“The important thing is the family. If you can keep the family together — and that’s the backbone of our whole business, catering to families — that’s what we hope to do.”

“Do a good job. You don’t have to worry about the money; it will take care of itself. Just do your best work — then try to trump it.”

“Leadership implies a strong faith or belief in something.” 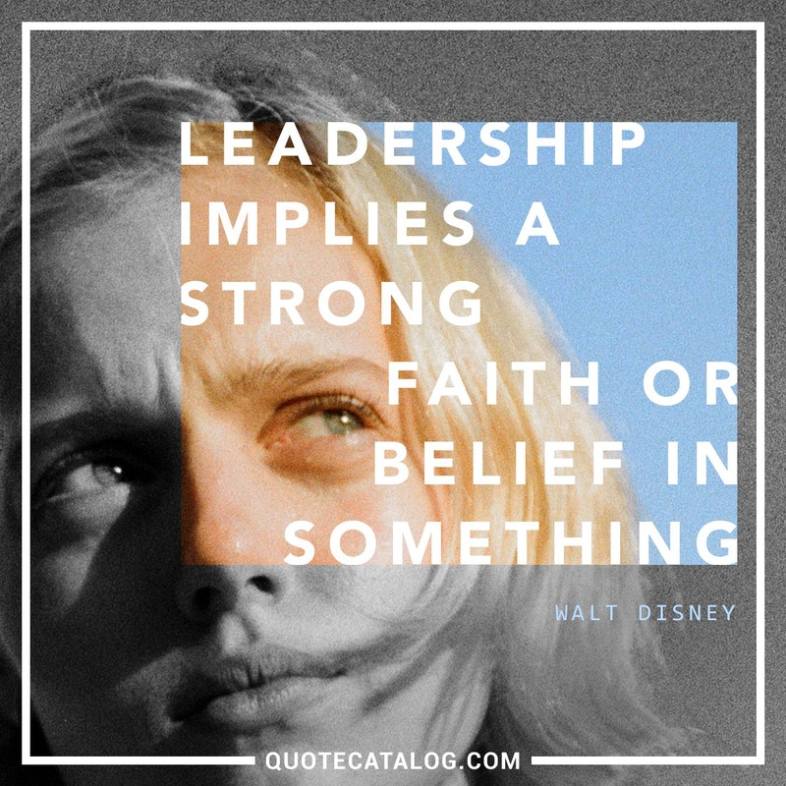 “I would rather entertain and hope that people learned something than educate people and hope they were entertained.”

“A person should set his goals as early as he can and devote all his energy and talent to getting there. With enough effort, he may achieve it. Or he may find something that is even more rewarding. But in the end, no matter what the outcome, he will know he has been alive.”

“All our dreams can come true if we have the courage to pursue them.”

“When you’re curious, you find lots of interesting things to do.”

“The way to get started is to quit talking and begin doing.”

“Somehow I can’t believe that there are any heights that can’t be scaled by a man who knows the secrets of making dreams come true. This special secret, it seems to me, can be summarized in four C’s. They are curiosity, confidence, courage, and constancy.”

“That’s the real trouble with the world. Too many people grow up.” 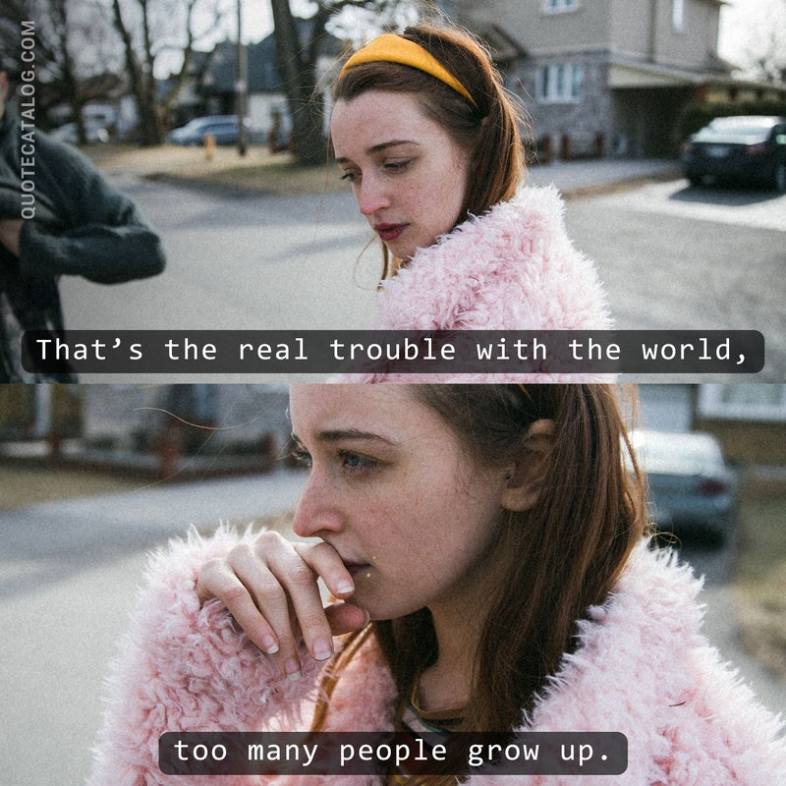 “It’s kind of fun to do the impossible.”

“Never get bored or cynical. Yesterday is a thing of the past.”

“The era we are living in today is a dream of coming true.”

“When you believe in a thing, believe in it all the way, implicitly and unquestionable.”

“Every child is born blessed with a vivid imagination. But just as a muscle grows flabby with disuse, so the bright imagination of a child pales in later years if he ceases to exercise it.”

“I suppose my formula might be: dream, diversify and never miss an angle.”

“I must explore and experiment. I am never satisfied with my work. I resent the limitations of my own imagination.”

“No! Don’t think outside the box! Once you say that, you’ve established that there is a box.” 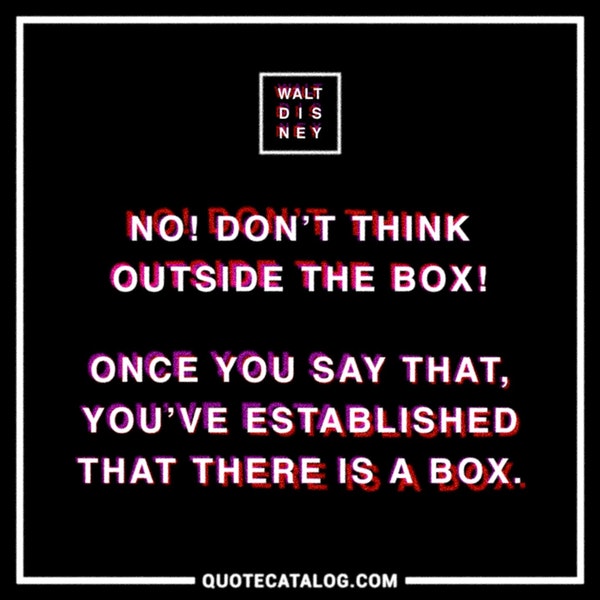 Other Walt Disney Quotes for Inspiration and Motivation

“A man should never neglect his family for business.”

“Why worry? If you’ve done the very best you can, then worrying won’t make it any better.”

“Our greatest natural resource is the minds of our children.”

“Laughter is timeless, imagination has no age, dreams are forever.”

“There is great comfort and inspiration in the feeling of close human relationships and its bearing on our mutual fortunes – a powerful force, to overcome the “tough breaks” which are certain to come to most of us from time to time.”

“You may not realize it when it happens, but a kick in the teeth may be the best thing in the world for you.”

“There is more treasure in books than in all the pirate’s loot on Treasure Island.”

“I always like to look on the optimistic side of life, but I am realistic enough to know that life is a complex matter.”

“Why do we have to grow up? I know more adults who have the children’s approach to life. They’re people who don’t give a hang what the Jones’ do. You see them at Disneyland every time you go there. They are not afraid to be delighted with simple pleasures, and they have a degree of contentment with what life has brought – sometimes it isn’t much, either.”

“In bad times and in good, I’ve never lost my sense of zest for life.”

Inspirational Disney Quotes from the Movies

“The flower that blooms in adversity is the most rare and beautiful of all.”
–Mulan

“All it takes is faith and trust.”
–Peter Pan

“The past can hurt. But the way I see it, you can either run from it or learn from it.”
–The Lion King

“The only way to get what you want in this world is through hard work.”
–The Princess and the Frog

“Can anybody be happy if they aren’t free?”
–Beauty and the Beast

“The only thing predictable about life is its unpredictability.”
–Ratatouille

“Your identity is your most valuable possession. Protect it.”
–The Incredibles

“If you can’t say something nice, don’t say nothing at all.”
–Bambi

“Always let your conscience be your guide.”
–Pinocchio

“Ohana means family. Family means nobody gets left behind or forgotten.”
– Lilo & Stitch

“Adventure is out there.”
–Up

“Ladies do not start fights, but they can finish them.”
–The Aristocats

“When life gets you down you know what you’ve gotta do? Just keep swimming!”
–Finding Nemo

“From failure, we learn, from success not so much.”
–Meet the Robinsons

“You are braver than you believe, stronger than you seem and smarter than you think.”
–The Many Adventures of Winnie The Pooh

“We may have our differences, but nothing’s more important than family.”

“Sometimes the right path is not the easiest one”
–Pocahontas

“Like so many things, it’s not what’s outside but what’s inside that counts.”

“You control your destiny — you don’t need magic to do it. And there are no magical shortcuts to solving your problems.”

“Listen with your heart, you will understand.”

“If you focus on what you left behind, you will never be able to see what lies ahead.”

“A true hero isn’t measured by the size of his strength, but by the strength of his heart.”

“Happiness is the richest thing we will ever own.”

“The very things that hold you down are going to lift you up.”

“Remember, you’re the one who can fill the world with sunshine.”

–Snow White and the Seven Dwarfs

“Everything that made that giant tree is already contained inside this tiny little seed. All it needs is some time, a little bit of sunshine and rain, and voilá! Now, y-you might not feel like you can do much now, but that’s just because, well, you’re not a tree yet. You just have to give yourself some time. You’re still a seed.”

“I’ll be there someday. I can go the distance. I will find my way if I can be strong.“
–Hercules​​

“You want something done, you’ve got to do it yourself.”

“In every job that must be done, there is an element of fun. You find the fun and—snap!—the job’s a game!”

“Love is putting someone else’s needs before yours.”

“There are those who say fate is something beyond our command. That destiny is not our own, but I know better. Our fate lives within us, you only have to be brave enough to see it.”

“She warned him not to be deceived by appearances, for beauty is found within.”

–Beauty and the Beast

“No matter how your heart is grieving, if you keep on believing, the dream that you wish will come true.”

Do you have a favorite Walt Disney quote?

Here are some books based on Disney, his life, and the creation behind and magic of Disneyland and Disney World, featuring some inspirational quotes by the man himself.

How to Be Like Walt: Capturing the Disney Magic Every Day of Your Life

I’m ‘In Repair’ With My Bipolar Disorder