One of America’s greatest influential writers and considered to be the “father of American literature”, Samuel Clemens, was born in Florida, Missouri on November 30th, 1835. Through publishing a vast number of pieces including The Adventures of Tom Sawyer (1876) and The Adventures of Huckleberry Finn (1885), he later acquired his more famous pseudonym, Mark Twain.

Many of the stories he wrote were inspired by his childhood, growing up in Hannibal, Mississippi along the Mississippi River. He lived a life full of adventure that always carried over into his writing. In February of 1870, Mark Twain married Olivia Langdon and together they bore four children: Susy, Clara, Jean, and Langdon. He passed away on April 21st, 1910, leaving behind a plethora of great works for readers to adore, speak about, and quote through the following century. Enjoy some of the best Mark Twain quotes below! 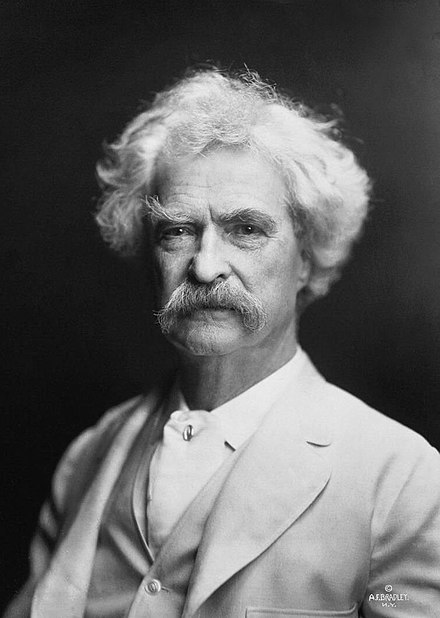 “The fear of death follows from the fear of life. A man who lives fully is prepared to die at any time.”

“The human race has only one really effective weapon and that is laughter.”

“Good friends, good books, and a sleepy conscience: this is the ideal life.”

“Use the right word, not its second cousin.”

“Never argue with stupid people, they will drag you down to their level and then beat you with experience.”

“The dog is a gentleman; I hope to go to his heaven not man’s.”

“Courage is resistance to fear, mastery of fear– not absence of fear.”

“Give every day the chance to become the most beautiful day of your life.”

“It is curious that physical courage should be so common in the world and moral courage so rare.”

“When we remember we are all mad, the mysteries disappear and life stands explained.”

“Keep away from people who try to belittle your ambitions. Small people always do that, but the really great make you feel that you, too, can become great.”

“When in doubt tell the truth. It will confound your enemies and astound your friends.”

“I do not fear death. I had been dead for billions and billions of years before I was born, and had not suffered the slightest inconvenience from it.”

“Life does not consist mainly, or even largely, of facts or happenings. It consists mainly of the storm of thoughts that is forever flowing through one’s head.”

“All you need in this life is ignorance and confidence; then success is sure.”

“Clothes make the man. Naked people have little or no influence on society.”

“Nothing so needs reforming as other people’s habits. Fanatics will never learn that, though it be written in letters of gold across the sky. It is the prohibition that makes anything precious.”

“The man who does not read has no advantage over the man who cannot read.”

“A man is never more truthful than when he acknowledges himself a liar.”

“There are three kinds of lies: lies, damned lies, and statistics.”

“Education: the path from cocky ignorance to miserable uncertainty.”

“Good breeding consists of concealing how much we think of ourselves and how little we think of the other person.”

“No man is a failure who has friends.”

“Never tell the truth to people who are not worthy of it.”

“Giving up smoking is the easiest thing in the world. I know because I’ve done it thousands of times.”

“A lie can travel halfway around the world while the truth is putting on its shoes.”

“If you pick up a starving dog and make him prosperous he will not bite you. This is the principal difference between a dog and man.”

“Be careful about reading health books. You may die of a misprint.”

“Adam was the only man who, when he said a good thing, knew that nobody had said it before him.”

“Sanity and happiness are an impossible combination.”

“I must have a prodigious amount of mind; it takes me as much as a week, sometimes, to make it up!”

“An author values a compliment even when it comes from a source of doubtful competency.”

“The only difference between reality and fiction is that fiction needs to be credible.”

“Age is an issue of mind over matter. If you don’t mind, it doesn’t matter.”

“The more I learn about people, the more I like my dog.”

“Out of all the things I have lost, I miss my mind the most.”

“I do not wish any reward but to know that I have done the right thing.”

“A man’s character may be learned from the adjectives which he habitually uses in conversation.”

“Truth is stranger than fiction, but it is because Fiction is obliged to stick to possibilities; Truth isn’t.”

“The very ink with which all history is written is merely fluid prejudice.”

“I wonder if God created man because He was disappointed with the monkey.”

“A successful book is not made of what is in it, but what is left out of it.”

“It’s better to keep your mouth shut and appear stupid than open it and remove all doubt.”

“Twenty years from now you will be more disappointed by the things you didn’t do than by the ones you did do. So, throw off the bowlines. Sail away from the safe harbor. Catch the trade winds in your sails. Explore. Dream. Discover.”

“The secret of getting ahead is getting started.”

“The world owes you nothing. It was here first.”

“Do something every day that you don’t want to do. This is the golden rule for acquiring the habit of doing your duty without pain.”

“Don’t wait. The time will never be just right.”

“We are all in the gutter, but some of us are looking at the stars.”

“Wisdom is the reward you get for a lifetime of listening when you would rather have talked.”

“The two most important days in your life are the day you are born and the day you find out why.”

“Never allow someone to be your priority while allowing yourself to be their option.”

“A half-truth is the most cowardly of lies.”

“Let us be thankful for the fools. But for them, the rest of us could not succeed. ”

“Don’t part with your illusions. When they are gone you may still exist, but you have ceased to live.”

“The trouble is not in dying for a friend, but in finding a friend worth dying for.”

“Never put off till tomorrow what may be done day after tomorrow just as well.”

“Thousands of geniuses live and die undiscovered – either by themselves or by others.”

“It’s easy to make friends, but hard to get rid of them.”

“The older I get, the more clearly I remember things that never happened.”

“There was never yet an uninteresting life. Such a thing is an impossibility. Inside of the dullest exterior there is a drama, a comedy, and a tragedy.”

“A man cannot be comfortable without his own approval.”

“Comparison is the death of joy.”

“Kindness is the language which the deaf can hear and the blind can see.”

“Any emotion, if it is sincere, is involuntary.”

“Books are for people who wish they were somewhere else.”

“What would men be without women? Scarce, sir…mighty scarce.”

“It is higher and nobler to be kind.”

“Forgiveness is the fragrance that the violet sheds on the heel that has crushed it.”

“Action speaks louder than words but not nearly as often.”

“There’s one way to find out if a man is honest: ask him; if he says yes, you know he’s crooked.”

“Everyone is a moon, and has a dark side which he never shows to anybody.”

“To get the full value of joy you must have someone to divide it with.”

“Explaining humor is a lot like dissecting a frog, you learn a lot in the process, but in the end you kill it.”

“You can’t depend on your eyes when your imagination is out of focus.”

“When angry, count to four; when very angry, swear.”

“I don’t like to commit myself about heaven and hell – you see, I have friends in both places.”

“Whenever you find yourself on the side of the majority, it is time to pause and reflect.”

“The source of all humor is not laughter, but sorrow.”

“If everyone was satisfied with himself, there would be no heroes.”

“I think that to one in sympathy with nature, each season, in turn, seems the loveliest.”

“Focus more on your desire than on your doubt, and the dream will take care of itself.”

“Necessity is the mother of taking chances.”

“Whoever is happy will make others happy too.”

If these Mark Twain quotations sparked interest then be sure to check out some of his most popular works of literature to enjoy a good book.

This Is What Therapy Taught Me About My Social Anxiety Disorder