Eminem–also referred to as “Slim Shady” or Marshall Mathers–is the most influential and controversial American rapper of all time. Along with being a record producer and an actor, Eminem definitely has his footing in the music industry. Whether he’s well-liked or not, Eminem quotes are powerful.

Born in 1972, he was raised by his prescription-drug-addict and emotionally and physically abusive mother after his dad left when he was an infant. He was bullied in school, and he and his mom moved back and forth between Missouri and Detroit, Michigan, throughout his young life. Changing schools two or three times a year made him an outcast, so he mostly kept to himself. He was bullied and beat up at school. He failed out of the ninth grade three times. He officially dropped out of school at age 17. Despite being a dropout, he spent time reading comic books and reading the dictionary.

Eminem was only 15 years old when he met and started dating 13-year-old Kim. They had a daughter named Hailie, who has been the subject of some of his music, including his 2004 song “Mockingbird.” Eminem and Kim’s relationship was on and off for years, but they divorced and officially ended things in 2006. Despite the demons in their relationship, Eminem has used Kim as a muse for his music.

His first rap album, The Slim Shady LP (or the extended version, The Slim Shady EP), was released in 1999. It won a Grammy Award and 4 MTV Video Music Awards. In 2000, he released The Marshall Mathers, which was–on record–the fastest-selling rap album in rap history. He then starred in a semi-biographical drama film called 8 Mile. This was loosely based on his life in Detroit and how he got into songwriting and rapping. Wanting to release his youthful anger and express his love(s) for hip hop music and language, Eminem joined the rap game. As a pale white skin and blue-eyed person, he entered rap battles in the Detroit scene, quickly becoming one of the most respected rappers.

Eminem’s rap music has been quite controversial but also quite influential too. Every lyric has a purpose. His love for the power of language has allowed him to develop powerful lyrics, sayings, and even some motivational quotes. Eminem’s lyric quotes are about the hardships of love, life, growing up in a poor, white family, his family, his demons, being bullied in school, and everything in between. His tough childhood was a source of inspiration for his music. Every little success was the motivation for him to keep going after what he wants. 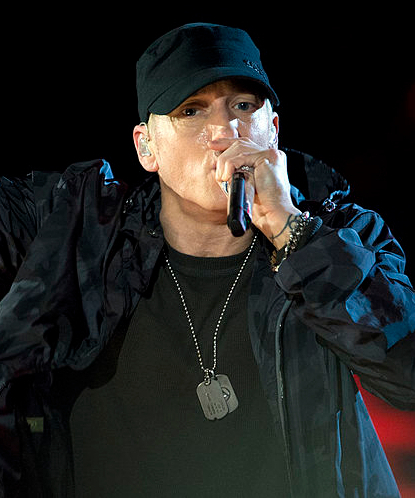 “I was poor white trash, no glitter, no glamour, but I’m not ashamed of anything.” – Eminem

“The truth is you don’t know what is going to happen tomorrow. Life is a crazy ride, and nothing is guaranteed.” – Eminem

“A normal life is boring.” – Eminem

“That’s why we seize the moment, try to freeze it and own it, squeeze it, and hold it.” – Eminem

“You don’t get another chance; life is no Nintendo game.” – Eminem

“Why is it so hard for people to believe that white people are poor?! I wouldn’t say I lived in a ghetto; I’d say I lived in the ‘hood. The same friends I had back then are the same people on tour with me now.” – Eminem

“Say there’s a white kid who lives in a nice home, goes to an all-white school, and is pretty much having everything handed to him on a platter – for him to pick up a rap tape is incredible to me because what that’s saying is that he’s living a fantasy life of rebellion.” – Eminem

“It sometimes feels like a strange movie, you know, it’s all so weird that sometimes I wonder if it is really happening.” – Eminem

“Nobody asked for life to deal us with these bulls**t hands we’re dealt. We have to take these cards ourselves and flip them don’t expect any help.” – Eminem

“Don’t ever try to judge me, dude; you don’t know what the fuck I’ve been through.”  – Eminem

“It happens all the time. They take your heart and steal your life. And it’s as though you feel you’ve died ’cause you’ve been killed inside. But yet you’re still alive, which means you will survive.” – Eminem

“These times are so hard, and they’re getting even harder.” – Eminem

“You know, not to sound corny or nothing, but I felt like a fighter coming up, man. I felt like, you know, I’m being attacked for this reason or that reason, and I have to fight my way through this.” – Eminem

Best Eminem Quotes and Lyrics about Hard Work and Success

“Success is my only option; failure’s not.”  – Eminem

“Look, if you had one shot or one opportunity. To seize everything you ever wanted in one moment. Would you capture it or just let it slip?” – Eminem

“I try to treat all the money I’m making like it’s the last time I’m going to make it.” – Eminem

“You can make something of your life. It just depends on your drive.” – Eminem

“Sometimes, you just feel tired. Feel weak. And when you feel weak, you feel like you wanna just give up. But you gotta search within you. You gotta find that inner strength and just pull that shit out of you. And get that motivation to not give up and not be a quitter.” – Eminem

“Everybody has goals, aspirations, or whatever, and everybody has been at a point in their life where nobody believed in them.”  – Eminem

“Behind every successful person lies a pack of haters.” – Eminem

Eminem Quotes and Lyrics about Growth and Strength

“I started learning how to not be so angry about things, learning how to count my f—ing blessings instead. By doing that, I’ve become a happier person, instead of all this self-loathing I was doing for a while.”  – Eminem

“It creeps me out sometimes to think of the person I was. I was a terrible person. I was mean to people.” – Eminem

“Sometimes you just gotta let shit go and say ‘To hell with it’ and move on.”  – Eminem

“Somewhere deep down, there’s a decent man in me; he just can’t be found.” – Eminem

“People can try to reinvent themselves. I don’t think you can really change who you are, though, because who you are is pretty much where you came from and what you’ve done up to now.” – Eminem

“Dealing with backstabbers, there was one thing I learned. They’re only powerful when you got your back turned.”  – Eminem

“We’ll walk this road together, through the storm. Whatever weather, cold or warm.” – Eminem

Eminem Quotes and Lyrics about Love

“Love is just a word, but you bring it definition.” – Eminem

”Ultimately, who you choose to be in a relationship with and what you do in your bedroom is your business.” – Eminem

“You ever love somebody so much you can barely breathe when you’re with ’em. You meet, and neither one of you even know what hit ’em.” – Eminem

“When I see my baby. Suddenly I’m not crazy. It all makes sense when I look into her eyes.” – Eminem

“Run out the room, and I’ll follow you like a lost puppy. Baby, without you, I’m nothing, I’m so lost, hug me, then tell me how ugly I am, but that you’ll always love me.” – Eminem

“My body aches when I ain’t with you; I have zero strength. There’s no limit on how far I would go, no boundaries, no lengths.” – Eminem

“The more you put me through, The more it makes me wanna come back to you. You say you hate me; I just love you more. You don’t want me; I just want you more.” – Eminem

Eminem Quotes and Lyrics About Music

“When you’re a little kid, you don’t see color, and the fact that my friends were black, never crossed my mind. It never became an issue until I was a teenager and started trying to rap.” – Eminem

“But music is a reflection of self, we just explain it, and then we get our checks in the mail.” – Eminem

“I want to solidify as an artist. As I grow as a person and make mistakes and learn from them, I’m going to grow artistically.” – Eminem

“If there’s not drama and negativity in my life, all my songs will be really wack and boring or something.” – Eminem

“Hip-hop saved my life, man. It’s the only thing I’ve ever been even decent at. I don’t know how to do anything else.” – Eminem

“I do say things that I think will shock people. But I don’t do things to shock people. I’m not trying to be the next Tupac, but I don’t know how long I will be on this planet. So while I’m here, I might as well make the most of it.” – Eminem

“Honestly, I’d love to be remembered as one of the best to ever pick up a mic, but if I’m doing my part to lessen some racial tension, I feel good about what I’m doing.” – Eminem

Other Lyrics And Quotes Eminem Has Said

“Trust is hard to come by. That’s why my circle is small and tight. I’m kind of funny about making new friends.” – Eminem quotes

“And to the rest of the world, God gave you them shoes to fit you, so put them on and wear them. Be yourself, man, be proud of who you are.” – Eminem quotes

“The moment I used my adversity to my advantage, my career exploded.” – Eminem quotes

“Don’t let them say you ain’t beautiful. They can all get fu#ked just stay true to you.”  – Eminem quotes

“I realized, ‘Yo, I can’t do anything in moderation. I don’t know how.” – Eminem quotes

“You’ve got enemies? Good, that means you actually stood up for something.” – Eminem quotes