Edgar Allan Poe was one of the most influential writers of the 19th century, specifically as a poet and short story narrator. He was an American writer known for writing exquisite horror, like the mystery and psychological depth of The Tell-Tale Heart and The Premature Burial, or his detective fiction like The Murders in the Rue Morgue. His poem The Raven was slightly controversial and also wildly popular, sparking his fame. Annabel Lee was the last complete poem that Edgar Allan Poe wrote towards the end of his life, in which the narrator grieves the death of the beautiful Annabel Lee.

Before Edgar Allan Poe became a writer, he attended the University of Virginia briefly before forcibly dropping out due to a gambling problem. He also joined the U.S. Military Academy at West Point but was expelled after being absent from drills and classes. Alcohol was his vice and was often perceived as a drunk. He had various love affairs and marriages throughout his life. His death is still a mystery to this day–no one truly knows if it was from drinking or heart failure or something else.

Whether it was a poem or a short story, there was a dark beauty in Poe’s imagination and writing. Most poets and writers still love and praise the inspirational Edgar Allan Poe to this day. His craft for storytelling was remarkable and his legacy will live on forever, as an intense writer with a dark soul and a man of madness. 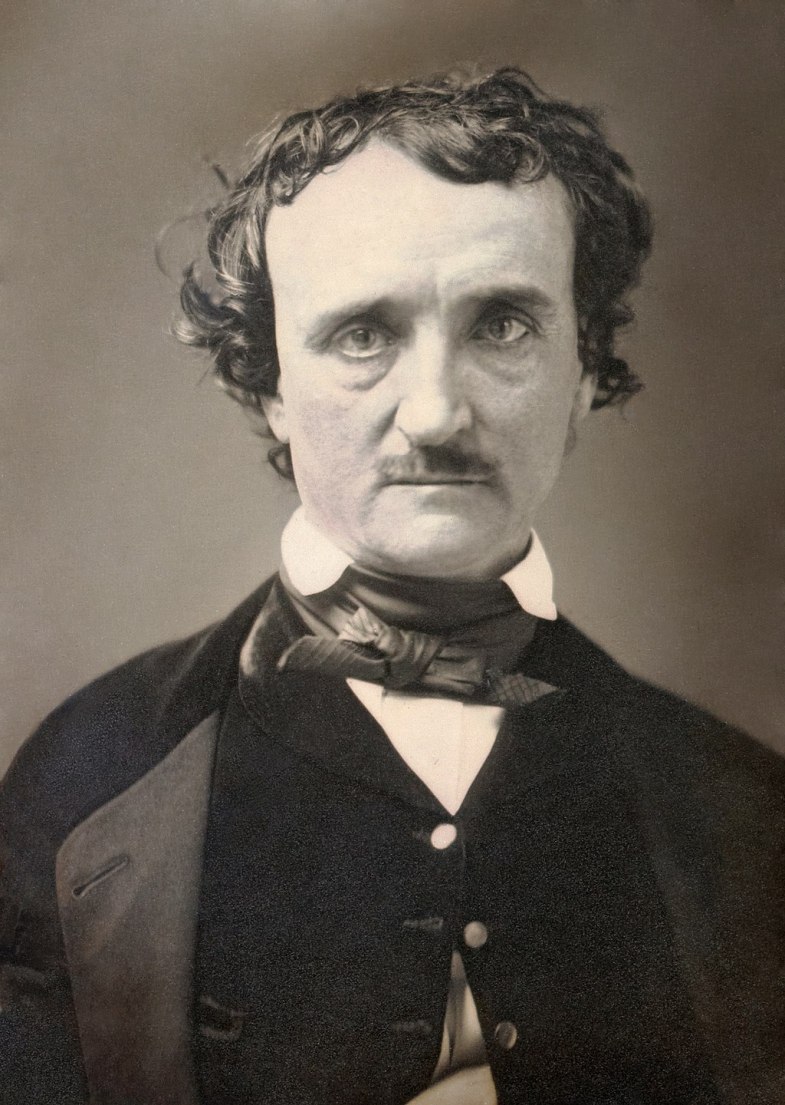 “I have no faith in human perfectibility. I think that human exertion will have no appreciable effect upon humanity. Man is now only more active – not more happy – nor more wise, than he was 6000 years ago.”

“All that we see or seem is but a dream within a dream.”

“It is by no means an irrational fancy that, in a future existence, we shall look upon what we think our present existence, as a dream.”

“The boundaries which divide Life from Death are at best shadowy and vague. Who shall say where the one ends, and where the other begins?”

“Man’s real life is happy, chiefly because he is ever expecting that it soon will be so.”

“Sleep, those little slices of death — how I loathe them.”

“The death of a beautiful woman is, unquestionably, the most poetical topic in the world.”

“To die laughing must be the most glorious of all glorious deaths!”

“We loved with a love that was more than love.”

“Beauty of whatever kind, in its supreme development, invariably excites the sensitive soul to tears.”

“There is no exquisite beauty… without some strangeness in the proportion.”

“Years of love have been forgot, In the hatred of a minute.”

“Deep in earth my love is lying / And I must weep alone.”

“There is something in the unselfish and self-sacrificing love of a brute, which goes directly to the heart of him who has had frequent occasion to test the paltry friendship and gossamer fidelity of mere Man.”

“There are chords in the hearts of the most reckless which cannot be touched without emotion.”

“When, indeed, men speak of Beauty, they mean, precisely, not a quality, as is supposed, but an effect – they refer, in short, just to that intense and pure elevation of the soul – not of intellect, or of heart.”

“I became insane, with long intervals of horrible sanity.”

“I have great faith in fools – self-confidence my friends will call it.”

“Men have called me mad; but the question is not yet settled, whether madness is or is not the loftiest intelligence– whether much that is glorious– whether all that is profound– does not spring from disease of thought– from moods of mind exalted at the expense of the general intellect.”

“I was never really insane except upon occasions when my heart was touched.”

“Invisible things are the only realities.”

“And so being young and dipped in folly I fell in love with melancholy.”

“I have absolutely no pleasure in the stimulants in which I sometimes so madly indulge. It has not been in the pursuit of pleasure that I have periled life and reputation and reason. It has been the desperate attempt to escape from torturing memories, from a sense of insupportable loneliness and a dread of some strange impending doom.”

“The scariest monsters are the ones that lurk within our souls…”

“I felt that I breathed an atmosphere of sorrow.”

“Science has not yet taught us if madness is or is not the sublimity of the intelligence.”

“I remained too much inside my head and ended up losing my mind.”

“Men have called me mad; but the question is not yet settled, whether madness is or is not the loftiest intelligence.”

“I was never kinder to the old man than during the whole week before I killed him.”

“Who has not, a hundred times, found himself committing a vile or silly action for no other reason than because he knows he should not? Have we not a perpetual inclination, in the teeth of our best judgement, to violate that which is Law, merely because we understand it to be such?”

“I need scarcely observe that a poem deserves its title only inasmuch as it excites, by elevating the soul. The value of the poem is in the ratio of this elevating excitement.”

“With me, poetry has not been a purpose, but a passion.”

“Poetry is the rhythmical creation of beauty in words.”

“All religion, my friend, is simply evolved out of fraud, fear, greed, imagination, and poetry.”

“To elevate the soul, poetry is necessary.”

“Every poem should remind the reader that they are going to die.”

“A short story must have a single mood and every sentence must build towards it.”

“Art is to look at not to criticize.”

“Beauty is the sole legitimate province of the poem.”

“In reading some books we occupy ourselves chiefly with the thoughts of the author; in perusing others, exclusively with our own.”

Other Quotes by Edgar Allan Poe

“Either the memory of past bliss is the anguish of today or the agonies which have their origins in ecstasies which might have been. ”

“Indeed, there is an eloquence in true enthusiasm that is not to be doubted.”

“Experience has shown, and a true philosophy will always show, that a vast, perhaps the larger, portion of truth arises from the seemingly irrelevant.”

“Believe nothing you hear, and only one half that you see.”

“The true genius shudders at incompleteness — imperfection — and usually prefers silence to saying the something which is not everything that should be said.”

“There are some secrets which do not permit themselves to be told.”

“I intend to put up with nothing that I can put down.”

“Once upon a midnight dreary, while I pondered, weak and weary, / Over many a quaint and curious volume of forgotten lore, / While I nodded, nearly napping, suddenly there came a tapping, / As of some one gently rapping, rapping at my chamber door. / Tis some visitor,” I muttered, “tapping at my chamber door — / Only this, and nothing more.” / “In a kingdom by the sea, / That a maiden there lived whom you may know / By the name of Annabel Lee; / And this maiden she lived with no other thought / Than to love and be loved by me.”

“Is all that we see or seem / But a dream within a dream?”

“And now was acknowledged the presence of the Red Death. He had come like a thief in the night. And one by one dropped the revelers in the blood-bedewed halls of their revel, and died each in the despairing posture of his fall. And the life of the ebony clock went out with that of the last of the gay. And the flames of the tripods expired. And Darkness and Decay and the Red Death held illimitable dominion over all.”

“Deep into that darkness peering, long I stood there wondering, fearing, / Doubting, dreaming dreams no mortals ever dared to dream before;”

“For passionate love is still divine / I lov’d her as an angel might / With ray of the all living light / Which blazes upon Edis’ shrine.”

“To observe attentively is to remember distinctly.”

“That man is not truly brave who is afraid either to seem or to be, when it suits him, a coward.”

The Masque of the Red Death

The Murders in the Rue Morgue

When Walking Away Is The Only Option

I’m ‘In Repair’ With My Bipolar Disorder