President Abraham Lincoln was a self-taught government legislator, lawyer, and opponent of slavery. In 1860, just before the Civil War, he was elected as president, making him America’s 16th president. In 1863, he developed the Emancipation Proclamation: a public sentiment to the great concern of slavery. This freed all slaves and led to the passage of the 13th Amendment, outlawing slavery. He also gave a brief speech at Gettysburg, known as the Gettysburg Address. In this speech, he discussed the meaning of the war: the pursuit of human equality and freedom.

Then, in April 1865, the president was watching a play at Ford’s Theater when a Confederate known as John Wilkes Booth stepped in his box and shot the president point-blank in the back of the head. He died the next day.

Lincoln’s life wasn’t all about the government and the nation, though. He had a humble beginning, growing up on a farm in Kentucky and helping his father on their farm. He was religious and spent a lot of time reading books and learning, especially of God and of the Bible. He also had a wife and four kids and they coped with the loss of a child who had died in infancy. As his life went on, he developed a profound religious desire and even personified himself as God.

As the 16th president, Lincoln was a spokesman for liberty, equality, and freedom of all. He made American History with his oppositions and beliefs. These are some of the best Lincoln quotes: 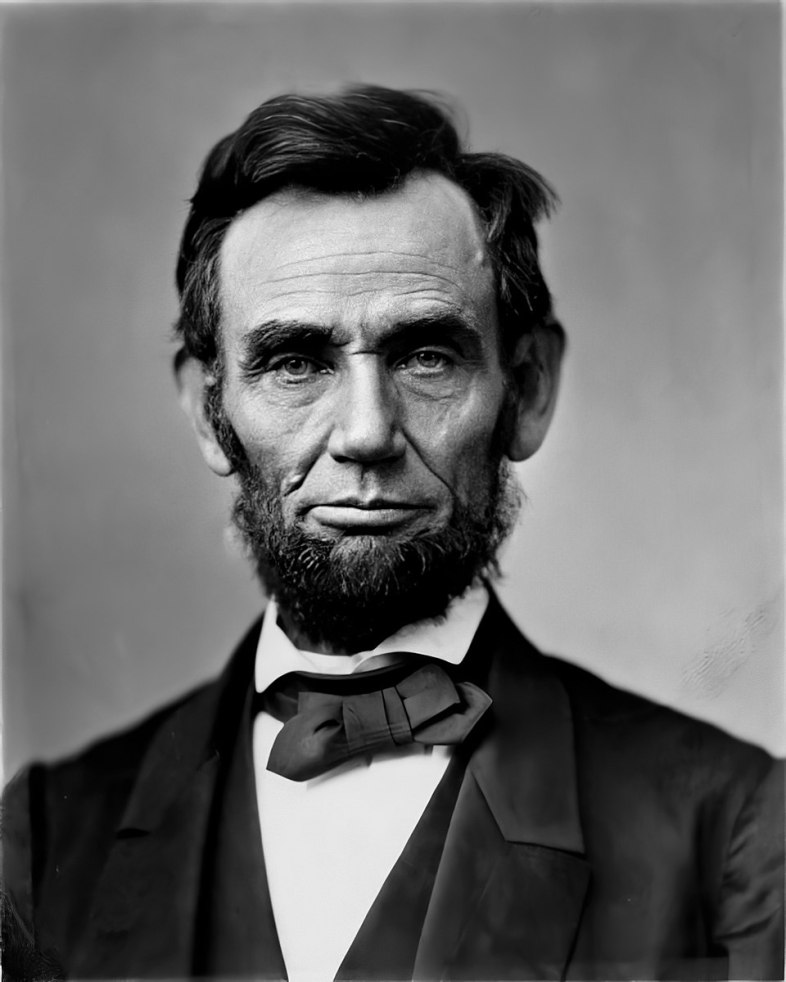 “In the present Civil War, it is quite possible that God’s purpose is something different from the purpose of either party—and yet the human instrumentalities, working just as they do, are of the best adaptation to effect His purpose.”

“I shall be most happy indeed if I shall be a humble instrument in the hands of the Almighty, and of this, his almost chosen people, for perpetuating the object of that great struggle.”

“Common looking people are the best in the world: that is the reason the Lord makes so many of them.”

“With malice toward none; with charity for all; with firmness in the right, as God gives us to see the right, let us strive on to finish the work we are in; to bind up the nation’s wounds…. ”

“My concern is not whether God is on our side; my greatest concern is to be on God‘s side, for God is always right.”

“Both read the same Bible and pray to the same God, and each invokes His aid against the other. It may seem strange that any men should dare to ask a just God’s assistance in wringing their bread from the sweat of other men’s faces, but let us judge not, that we be not judged. The prayers of both could not be answered. That of neither has been answered fully. The Almighty has His own purposes.”

“Fondly do we hope, fervently do we pray, that this mighty scourge of war may speedily pass away. Yet, if God wills that it continue until all the wealth piled by the bondsman’s two hundred and fifty years of unrequited toil shall be sunk, and until every drop of blood drawn with the lash shall be paid by another drawn with the sword, as was said three thousand years ago, so still it must be said: “the judgments of the Lord are true and righteous altogether.”

“I can see how it might be possible for a man to look down upon the earth and be an atheist, but I cannot conceive how a man could look up into the heavens and say there is no God.”

“All I ask for the negro is that if you do not like him, let him alone. If God gave him but little, that little let him enjoy.”

“It is difficult to make a man miserable while he feels worthy of himself and claims kindred to the great God who made him.”

“All that I am or ever hope to be, I owe to my angel mother.”

“Let us have faith that right makes might, and in that faith, let us, to the end, dare to do our duty as we understand it.”

“This nation, under God, shall have a new birth of freedom — and that government of the people, by the people, for the people, shall not perish from the earth.”

“America will never be destroyed from the outside. If we falter and lose our freedoms, it will be because we destroyed ourselves.”

“Those who deny freedom to others, deserve it not for themselves”

“Whenever I hear anyone arguing for slavery, I feel a strong impulse to see it tried on him personally.”

“Those who deny freedom to others deserve it not for themselves; and under the rule of a just God, cannot long retain it.”

“We all declare for liberty, but in using the same word we do not all mean the same thing.”

“Freedom is the last, best hope of earth.”

“The legitimate object of government is to do for a community of people whatever they need to have done, but cannot do at all, or cannot do so well, for themselves, in their separate and individual capacities.”

“No man is good enough to govern another man without the other’s consent.”

“Fourscore and seven years ago our fathers brought forth on this continent a new nation, conceived in liberty and dedicated to the proposition that all men are created equal.”

“The government will not assail you…. You have no oath registered in Heaven to destroy the government, while I shall have the most solemn one to preserve, protect, and defend it.”

“Nearly all men can stand adversity, but if you want to test a man’s character, give him power.”

“I am a firm believer in the people. If given the truth, they can be depended upon to meet any national crisis. The great point is to bring them the real facts.”

“This country, with its institutions, belongs to the people who inhabit it. Whenever they shall grow weary of the existing government, they can exercise their constitutional right of amending it, or their revolutionary right to dismember it or overthrow it.”

“I have always found that mercy bears richer fruits than strict justice.”

“Fondly do we hope, fervently do we pray, that this mighty scourge of war may speedily pass away.”

“Elections belong to the people. It’s their decision. If they decide to turn their back on the fire and burn their behinds, then they will just have to sit on their blisters.”

“A house divided against itself cannot stand.” I believe this government cannot endure, permanently half slave and half free.”

“If the great American people will only keep their temper, on both sides of the line, the troubles will come to an end…”

“The ballot is stronger than the bullet.”

“Nothing valuable can be lost by taking time.”

“We can complain because rose bushes have thorns, or rejoice because thorn bushes have roses.”

“I want it said of me by those who knew me best, that I always plucked a thistle and planted a flower where I thought a flower would grow.”

“I am rather inclined to silence, and whether that be wise or not, it is at least more unusual nowadays to find a man who can hold his tongue than to find one who cannot.”

“Most folks are about as happy as they make their minds up to be.”

“I would rather be a little nobody, then to be an evil somebody.”

“If I am killed, I can die but once; but to live in constant dread of it, is to die over and over again.”

“That some achieve great success, is proof to all that others can achieve it as well.”

“Be sure you put your feet in the right place, then stand firm.”

“Let no feeling of discouragement prey upon you, and in the end, you are sure to succeed.”

“In this sad world of ours, sorrow comes to all, and it comes with bitter agony. Perfect relief is not possible, except with the passing of time.”

“The best way to predict your future is to create it.”

“Always bear in mind that your own resolution to succeed is more important than any one thing.”

“Life is hard but so very beautiful.”

“You cannot escape the responsibility of tomorrow by evading it today.”

Other Abraham Lincoln Quotes to Inspire You

“Whatever you are, be a good one.”

“Do I not destroy my enemies when I make them my friends?”

“Human action can be modified to some extent, but human nature cannot be changed.”

“No man has a good enough memory to be a successful liar.”

“I have been driven many times upon my knees by the overwhelming conviction that I had nowhere else to go. My own wisdom and that of all about me seemed insufficient for that day.”

“No man is poor who has a Godly mother.”

“I never encourage deceit, and falsehood, especially if you have got a bad memory, is the worst enemy a fellow can have. The fact is, truth is your truest friend, no matter what the circumstances are.”

“I do not think much of a man who is not wiser today than he was yesterday.”

“It has been my experience that folks who have no vices have very few virtues.”

“We are not enemies, but friends. We must not be enemies. Though passion may have strained, it must not break our bonds of affection. The mystic chords of memory, stretching from every battlefield and patriot grave to every living heart and hearthstone all over this broad land, will yet swell the chorus of the Union, when again touched, as surely they will be, by the better angels of our nature.”

“Perhaps a man’s character was like a tree, and his reputation like a shadow; the shadow is what we think of it, the tree is like the real thing.” – Abraham Lincoln

“Every man’s happiness is his own responsibility.”

“Books serve to show a man that those original thoughts of his aren’t very new after all.”

“The better part of one’s life consists of his friendships.”

“Do good to those who hate you and turn their ill will to friendship.”

“Better to remain silent and be thought a fool than to speak out and remove all doubt.”

“You cannot build character and courage by taking away people’s initiative and independence.”

“If you look for the bad in people expecting to find it, you surely will.”

“Truth is generally the best vindication against slander.”