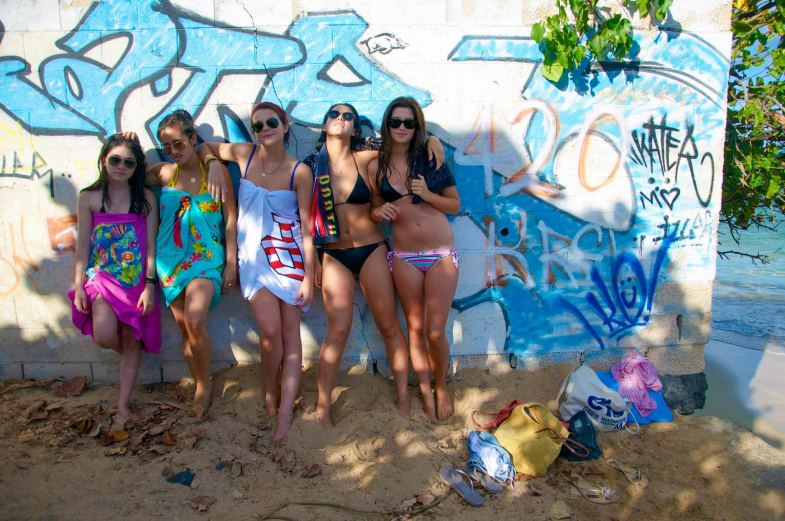 1. You’re very comfortable not shaving your legs for months at a time. Or your vagina, for that matter. Because “shaving” was such a foreign concept in high school, you’re uncompelled to answer the patriarchy’s call to be perpetually hairless.

2. You don’t feel the need to always wear a bra. And by “always,” I mean ever. When you were surrounded exclusively by tits, there was no need to apologize for unsupported double-Ds or chronic nippleitus. Not much has changed.

3. You’re fucking hilarious. By the time dudes were around to let you know that “girls aren’t funny,” you’d already developed a dope sense of humor, and you’re too outrageous to change now. Sorry, boys!

5. So, when you got to college, you were never too shy to raise your hand. Boys don’t intimidate you. No one intimidates you. You’re smart, prepared, and articulate as all hell.

6. Which is why you never preface or apologize for your opinions. No “this is probably wrong/stupid/irrelevant, but…” No qualifiers. No “buts.” Whatever you have to say is brilliant and productive and entirely worth saying.

7. And on the (rare) occasion that you’re wrong, you bounce back quick. Because you’re used to being around women who won’t make you feel embarrassed or stupid for messing up, you can reformulate a flawed thought in no time.

8. You would never, EVER describe yourself as a “guy’s girl” (because you’re not a woman-hating sociopath). You love women, so those who proudly consider themselves “one of the guys” make zero sense to you. Why the fuck would you want to be one of those…

10. On that note, you’re a free spirit (sexually). You started making out with girls (just for practice…obviously) long before you started hooking up with guys. Not only are you open to homo/bisexual experiences, you also just, like, know WTF you’re doing.

11. You’re unrelentingly immodest. Your all-girls’ school was a lawless society—a farting, shouting, tampon-throwing, lawless society. You’re often told that “you have no shame,” and it’s true. And you love that about you.

12. Speaking of tampons, you never feel the need to “hide” yours. You know there’s nothing embarrassing or awkward about your period, so you don’t make any efforts to conceal your tampon/pad/panty liner on your way to the bathroom. Girls who menstruate are people, too!

13. You know your body, and you’re not weirded out by it. Years of comparing nipples (and, likely, labia) on school grounds rendered you healthily unfazed by the female anatomy.

14. You proudly understand and claim your feminist identity. You didn’t really get the memo that sexism is a thing until after your high school graduation, when you were rattled to find that not all women—that not all people—are feminists. You did, however, get the memo that feminists are united only in their belief that men and women should have equal rights and opportunities—and, no, not in their bra-burning or man-hating—a while ago.

15. There’s no doubt in your mind that you’ll have a bomb-ass career. Your ambition has never been tempered by a fear that you won’t—that you can’t—be more successful than your male counterparts. You’re going places. That’s never been a question.

17. When you call yourself a Boss Ass Bitch, you mean it. You’re not embarrassed. You’re not ridiculous. You know you’re a boss. Everyone else better recognize.

90 Things Girls Are Sick And Tired Of Hearing

10 Things I’ll Teach My Children About Love And Relationships

7 Unrealistic Expectations We Got From Teenage TV Shows