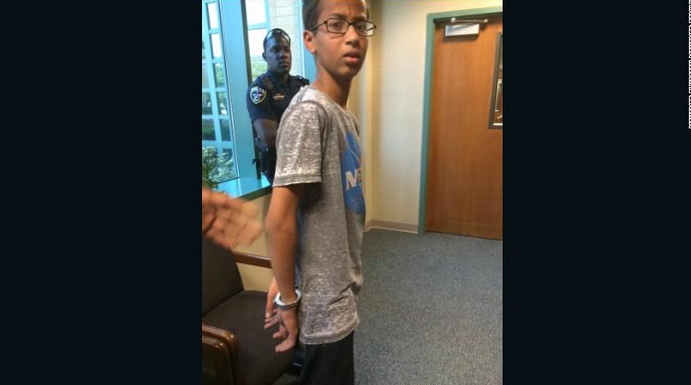 Ahmed Mohamed, a 14-year-old boy with a passion for engineering, made national news this week when he brought in a digital clock (that he made himself, out of a pencil case) to school and his teacher mistook it for a bomb. The police were called and the teen was taken away in handcuffs, before he even had a chance to explain himself.

After repeatedly telling police that his clock was, in fact, a clock, he was released and all charges were dropped. The police never apologized for arresting him, and he was apparently interrogated without an attorney present. But although this was probably a harrowing and humiliating experience for him, a lot of support and encouragement for Ahmed has come out of it. Here are some of the best responses to the #IStandWithAhmed trend on Twitter.

Cool clock, Ahmed. Want to bring it to the White House? We should inspire more kids like you to like science. It’s what makes America great.

Hi @IStandWithAhmed, we 💙 building things at @twitter too. Would you consider interning with us? We’d love it — DM us! #IStandWithAhmed

Hey @istandwithAhmed, if you ever want to get into the world of music, let me know. #theworldisyours #IStandWithAhmed

What happened was uncalled for. But it was the Almighty’s Plan to fulfil his dream, showcasing his talent to the world! #IStandWithAhmed

We at @popsci stand with all young scientists who want to learn and invent #IStandWithAhmed http://t.co/cJlgR7u1rP pic.twitter.com/Cu4M341sMk

How do I get in touch with Ahmed? We (@reddit) wanna intro him to some of our friends in science (+ internship?) http://t.co/Bwgnbz179O

#IStandWithAhmed because we love to make things too. Never stop inventing the future. pic.twitter.com/n1ergHSTg8

Hoping that the #istandwithahmed movement translates into a substantive national conversation on race, punishment, and incarceration.

“Don’t let people change who you are.” #IStandWithAhmed pic.twitter.com/e8h23Vpzcu

Here’s what scares me. A science teacher who doesn’t recognize science. #IStandWithAhmed

Kids who take pride in their nerdy work should be cherished & nurtured, not cuffed & interrogated #IStandWithAhmed https://t.co/mbZgmlEfHT

Hi @IStandWithAhmed ! I’d love you to join us for our science show Generator in Toronto on 28 Oct. There’s a ticket waiting for you.

We should be encouraging our children’s interest in innovation, #tech, and #STEM education. Nice work, Ahmed. #IStandWithAhmed

A young boy shouldn’t have to stop expressing their talent just because of your wrongful stereotypes #IStandWithAhmed pic.twitter.com/crdUiqs1Bo

#BecauseOfTwitter I Have A Job, And 19 Other Tweets That Explain Why Twitter Is EVERYTHING