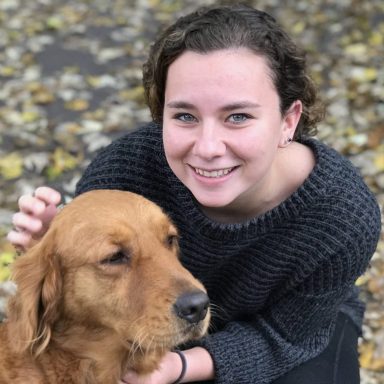 By Sam Newman Updated September 5, 2018
Several years ago my sister told me that he wanted to be my brother. The night that he told me has changed both of our lives for the better. Here is my story:

I remember the exact night he told me. It’s still perfectly clear in my mind. I remember the text he sent me, asking me to come into his room to chat. I remember him stumbling through the beginning, telling me he had something big to share. At first he asked me to guess. And then it all came out. My sister no longer wanted to be my sister. He wanted to be my brother instead.

That night we discussed his thoughts, how long he has known, and how gender is a wonky thing. I remember rambling on about readings from a Gender and Society class I had just taken and I remember him just sitting there quietly listening to my words. We talked about who he is now, how he felt in the past, and who he wanted to become. I fell asleep beside him that night, both of us knowing that the next day was his beginning.

Fast forward to a barber shop a couple weeks later. My mom, dad, and I huddled around him as his long wavy locks fell to the floor. With each snip of his hair, we saw him start to take deeper and more confident breathes. After the finishing touches, he looked in the mirror and beamed. To this day, I will never forget his smile. It was the smile of someone who was actually seeing themself for the first time.

When my brother first made his debut as a guy, he tried to portray himself as masculine as possible. Almost overnight, he became a guy who loved sports, monster trucks, beer, and women in bikinis. He hated the idea of fruity drinks, dancing, pink shirts, and Britney Spears-esque pop songs. While it may seem extreme, this abrupt transition made sense to me. If you are actively working to identify with something on the opposite end of a spectrum, you initially go into overdrive. My brother latched onto the most stereotypical aspects of his new association. While he now loves dancing, jamming to pop songs, and guzzling down fruity drinks, his initial desire to appear hyper-masculine turned him into a jock-asshole for a brief period of time. I have seen how masculinity (especially toxic masculinity) appears in some of the men around me, yet it shocked me that this macho behavior would be so salient for someone trying to become a man in his late teens.

Despite this hyper-masculine hiccup, my brother has gained a new sense of fashion throughout his transition. When he was my sister, his body was swallowed by baggy t-shirts and basketball shorts. Now, he wears nice shirts that are tucked in at the waist. His outfits are never complete without a suede shoe or an elegant belt. Hell, he even wears fake glasses now to add on to whatever “stylish” look he has chosen for the day. With his fresh look, he has become more comfortable expressing his masculinity and has also developed a newfound sense of belonging. My brother has transformed; he has truly blossomed. However, not everyone saw it that way.

That spring, he played on his high school girls’ varsity soccer team. He was still biologically a girl; the only technical difference between him and the other girls was his short hair and boy name. Yet, I remember the wave of confusion as they announced his name on the field. I remember the whispers from parents on the opposing team. It was as if they couldn’t seem to wrap their minds around a transgender kid. And to this day, I still remember someone on the other team calling him “It.”

I love my brother, but I also fear for him in this world. During his transition, I have felt like a fan in the crowd. It feels as if all I can do is cheer him on and “boo” at the rivals, but he has to be the one to play the game himself. While there will always be hate, such as one of my close friends from childhood unfollowing him on Instagram or someone scribbling out his face in a high school photo, there will also always be love. Having a transgender sibling has been one of the most extraordinary and eye-opening experiences of my life. Through my brother I have learned how to question gender stereotypes, fight for acceptance in the LGBTQ community, and normalize the other ways of gender performance. Most importantly, I have learned how to love people however they want to present. I guess that’s all we can really do right? We must accept those around us, embrace each other’s differences, and demonstrate to others how to love unconditionally.