I never swallow unless I’m in love, and I’ve never been in love.

Swallow…when doing it you swallow a little pre-cum anyway. I always thought it’s rude to not swallow because you’re saying he is nasty lol.

Ugh I HATE doing this…but my husband would love if I did it more…it’s SO yucky….

I gulp all the goo that I can. Then I suck every drop out of my mate until he is dry.

6. I prefer to gargle and snowball it back at him.

We like it as much as you do when you are taking a power hit and suck up that bong water….Really, like I said before I prefer to gargle and snowball it back at him.

The one and only time I tried—I threw up in the sink.

I swallow just because I like it. I find it a turn on to swallow rather than spit. I wouldn’t want him to be making spitting and gagging sounds when he was working on me.

9. I’ve done both. Actually depends on what it tastes like.

10. Sometimes I gag but I swallow with a smile.

I do it because he like it and no I don’t like the taste—sometimes I gag but I swallow with a smile.

11. Whether a chick swallows is her business. You ought to feel fortunate she’s giving you head. 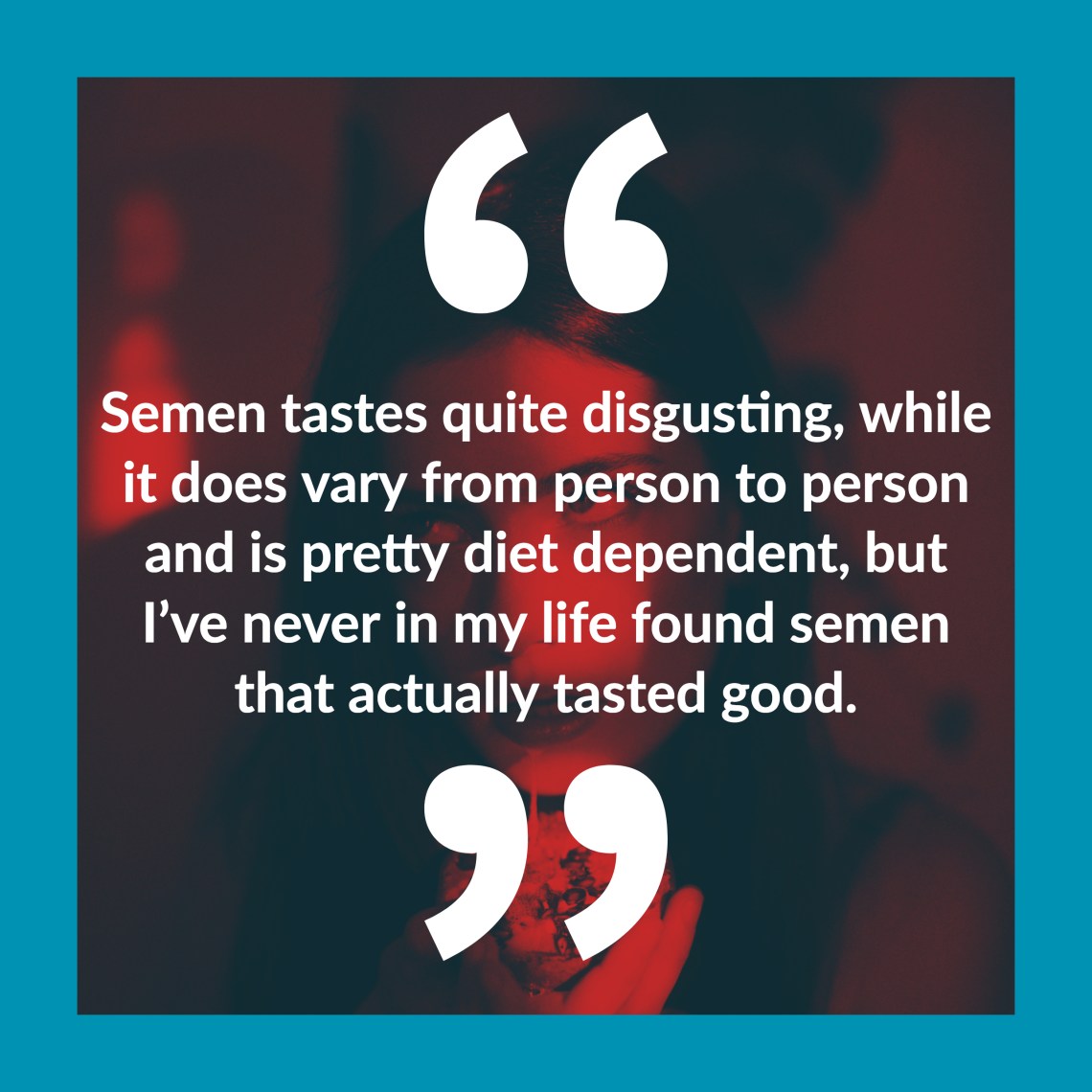 I don’t even know if I should be answering this, and girls are probably all going to thumbs down me, but I’m definitely a swallower. Why? Because if you deep-throat and swallow, you barely taste anything. Yeah, yeah, I know, TMI, but it’s true! It’s the best way to avoid a mess and the icky taste.

I never ever swallow, i have done so in the past and hate it, too salty and smells like chlorine! I enjoy giving oral sex and don’t need flavored lube to do it, the little drops don’t bother me, its the whole load that i can’t stand. The texture, the taste, the horrible after taste, i have a weak stomach at the best of times, then i end up burping and re-living the initial swallow all over again. Thankfully hubby is very understand so always warns me and catches it himself.

14. I swallow when it’s not lumpy and salty…but most of the time I can’t!

Try to get him to cut salt out of his diet!! I swallow when it’s not lumpy and salty…but most of the time I can’t!!.. and i find its mainly due to his diet habits!! Get him to drink more fluids too! Lol!

Semen tastes quite disgusting, while it does vary from person to person and is pretty diet dependent, but I’ve never in my life found semen that actually tasted good….FI would love it if I would finish him off with a bj and I swallowed, he also knows that the taste just makes me gag and causes me to be queasy afterwards. Since he’s not willing to subside off of only fruit and yogurt, he isn’t exactly going to press the subject….Not everyone is willing to do it, I second the option of having him cum on your tits or something instead, men seem to love that just as much.

blurgh! the taste makes me gag just imagining it! when we first got together i did all the time, then as u get on a bit i was like hell no! at 1st i wanted to please u now i wanna like u lol. if i do do it i do have a drink but its the taste after u have just swallowed, its horrific! god bless u ladies who grin and bare it, ur a bigger lady than me! blurgh! lol. thanks for the laugh girlies

17. I feel like gagging now just thinking about it.

I swallow only when I am severely hammered, which is rare…or I am feeling generous. I dont like his taste. I don’t really like the feeling it gives in the back of my throat. I feel like gagging now just thinking about it…

18. The thought of it being alive with a million little things swimming makes me want to puke.

19. Yep definitely bleach, and it smells quite strong too!

yep definitely bleach, and it smells quite strong too!! TMI alert, but even after hubby has ‘finished’ somewhere else i can still smell the bleach. When i was pregnant with DD1 i had really bad heartburn and it got to the point where i couldn’t even take gaviscon because it reminded me of hubby’s spunk, not sure if it was the texture, colour or what but i couldn’t swallow it without boaking. So good luck with the gulping!!!!

20. Just keep breathing through your nose.

I swallow it because I like the taste and texture of it number one. Number two is because guys like it when we swallow it, seems to be a turn on for them…and lastly would seem a bit awkward to have to excuse myself for a moment to spit it out or whatever, then return for my turn at getting satisfied. Just keep breathing through your nose.

I never swallow. The smell alone makes me gag a little. He loves to cum in my mouth, but I spit it out immediately afterwards. If I don’t I will throw up. The few times that I have swallowed, I couldn’t stand the way it felt on the back of my throat. It was very mucousy, and no matter how many times I swallowed or how much water I drank, I couldn’t get the feeling to go away. It’s like snot at the back of my throat that won’t go down. DH was concerned at first that I thought he was gross, but I’ve assured him that it’s just me and my stupid gag reflex. He doesn’t take it personally anymore.

Oral is mostly foreplay, but every so often I’ll blow him just because I like blowing him, and yes I swallow. It’s not like cinnamon-buns tasty, but it’s not bad, and I don’t mind it.

25. Eat your fruit like a good man and i swallow every drop.

Eat your fruit like a good man and i swallow every drop.

26. I can’t think of anything more degrading to a man than have his chick spit out or not accept his essence.

I swallow, and I’m dang proud of it :) It’s pretty nasty, but you get used to it after a while. I truly, actually swallow…and yes, my man does kiss me after, but after a few seconds usually. I’ve always found that kind of odd though.

28. I don’t think I’d ever be able to do this without throwing up and totally ruining the moment.

Oh my I’m queasy just talking about it LOL. I don’t think I’d ever be able to do this without throwing up and totally ruining the moment.

30. i threw in the towel on swallowing when it ended up coming out of my nose.

i threw in the towel on swallowing when it ended up coming out of my nose. that was the end of that LOL.

31. I think it tastes like crap and prefer not to swallow it.

OK, honestly…I think it tastes like crap and prefer not to swallow it. I have done it before, usually because it’s a turn on for my man, never because it tastes good. From what I can tell it tastes a bit like bleach, you know the smell? that’s pretty much what it tastes like.

32.Have him drink pineapple juice and skip onions and garlic. Makes all the difference in the world.

Yep every single time. Have him drink pineapple juice and skip onions and garlic. Makes all the difference in the world.

33. I am submissive and not only do it as part of the lifestyle but I do it to make my man happy because I know it is a big turn-on for them.

I myself swallow. I am submissive and not only do it as part of the lifestyle but I do it to make my man happy because I know it is a big turn-on for them. There is a kinky and taboo aspect as well so that also makes me want to do it even more.

34. It made me gag so then it all came out my nose, swimmers and all.

35. Don’t really care about the taste…he likes it, it’s less messy so why not?

Sometimes, when I don't have anything important to do, I write.