1. “We slept together once a week for about a year. After about 9 months I realized I had really deep feelings for her, at 12 months I confessed them to her. That was 7 years ago and now we are married with a two-year-old.”

2. “I was sleeping with other people, and I made that clear to her. I was in my ‘having fun’ stage and I wanted to rack up some numbers, as gross as that makes me sound. But when you meet someone who is fun and good in bed and a genuinely good person, you can’t just say goodbye to them. I didn’t know if I would meet someone like her again when I was ready, so I decided I was ready now and lucky she felt the same way.”

3. “I went it to it “knowing” it was going to be a short-term, casual thing. We met on Tinder where I specifically told her I was only looking for a fwb. I had gone through a really bad breakup a few months earlier and I definitely wasn’t read to jump in again, I just wanted someone to hook up with occasionally. We saw each other once or twice a month for a year, very casually, before things started really heating up. We were perfect together in and out of bed. It became clear that we should just be together. We actually talked and decided to become exclusive before we’d ever been on a date outside one of our apartments together!”

4. “After a few months we fell for each other but we also knew we were completely incompatible. We wanted different lives and it wasn’t fair to either of us to make it work so we broke it off.”

5. “I truly thought I didn’t deserve her and she’d never feel the same way about me, which is why I never pushed for anything beyond FWB. She was beautiful and successful and had a lot of friends, I was living with my parents and trying to get my life together. One day she told me she was seeing someone else and caught the hurt look in my eye. Confused, she pressed me about why I’d be hurt when I was the one keeping her at an arms distance. I realized how stupid I was being and told her how lucky I’d be if she wanted to be with me. We’ve been together ever since.”

6. “Maybe some people can sleep with someone consistently without falling for them, but I can’t. I was attracted with her enough to sleep with her, initially, and the more we started hanging out laughing in bed and talking, the more I liked her as a person. It just made sense that we’d start dating.”

7. “We got closer and closer the longer we knew each other. Sometimes we weren’t even having sex when we hung out anymore — and I was fine with that. We just gradually became a couple and I couldn’t be happier about it.”

8. “I fell for her and I knew she didn’t feel the same way. I kept sleeping with her which was a big mistake and I fell into a pretty bad depression. I understood why the expression is “breaking” your heart because I really felt, physically, that that’s what happened.”

10. “I fell in love with her very quickly, she wasn’t like my exes. There was something about those nights with her in my arms that made me open up to the possibility of being together. She had kind of entered into the agreement with that notion, so we started officially dating after just a month of trying to be casual.”

11. “I have a ‘failed’ fwb relationship in the sense that we are now married. We were good friends before we decided to start sleeping together with no promises or strings attached, but of course that only deepened our bond and brought us close together. We were inseparable soon after, that was 9 years ago.”

12. “About a year ago I met a promising girl on Tinder, but I was planning to move to another city within the next 6-months. It was a dream I had that I was about to act on, but my feelings for her made me stay. Even though we weren’t in love, it was the most loving, passionate sex I’d ever had. She makes me feel completely loved and cared for in and out of the bedroom. I don’t regret it at all, I’ve never been happier.”

13. “I was in a fwb situation with a girl I could have loved, but it was the wrong time for me and I told her that upfront. She fell, I didn’t (or at least, I was more rational about the fact that we didn’t have a future). It sucked for both of us and I’ll always have ‘what if…’ feelings about her.”

14. “I’d had a few FWB relationships before, but not like this. We always spent the night, it wasn’t a question. We cuddled like we were lovers. She was always touching me, even if we were just watching TV getting ready to wind down and go to bed together. The feeling of closeness we developed was intoxicating. After a few months I told her I had to be with her officially or walk away. Thankfully she agreed.”

15. “She didn’t want a relationship and I wanted her in any capacity I could have her, so I agreed to FWB even though I knew I would probably get hurt. I slept with her and pursued more for two years, but she never came around. I finally got the resolve to walk away, but it was almost a year before I stopped hurting over her.”

16. “I think FWB is actually the ideal way to start a relationship. It’s fun and casual and you quickly get to know who a person really is, not just the mask they put on to try to impress you. All three of my girlfriends started out as FWB including the girl I’m currently dating.”

17. “We called it FWB but right from the start it was more boyfriend/girlfriend, we just didn’t go on official dates. We’d spend weekends in bed together, cooking nice dinners, watching TV, and relaxing together. We loved each other’s company and missed the other person when they weren’t around. It got to the point where I couldn’t imagine waking up and not being able to text her, or not being able to go to sleep with my arms wrapped around her. It was stupid to not express more of this at the beginning, but it worked out because we’ve been together for three years and we’ve been talking about getting married.” 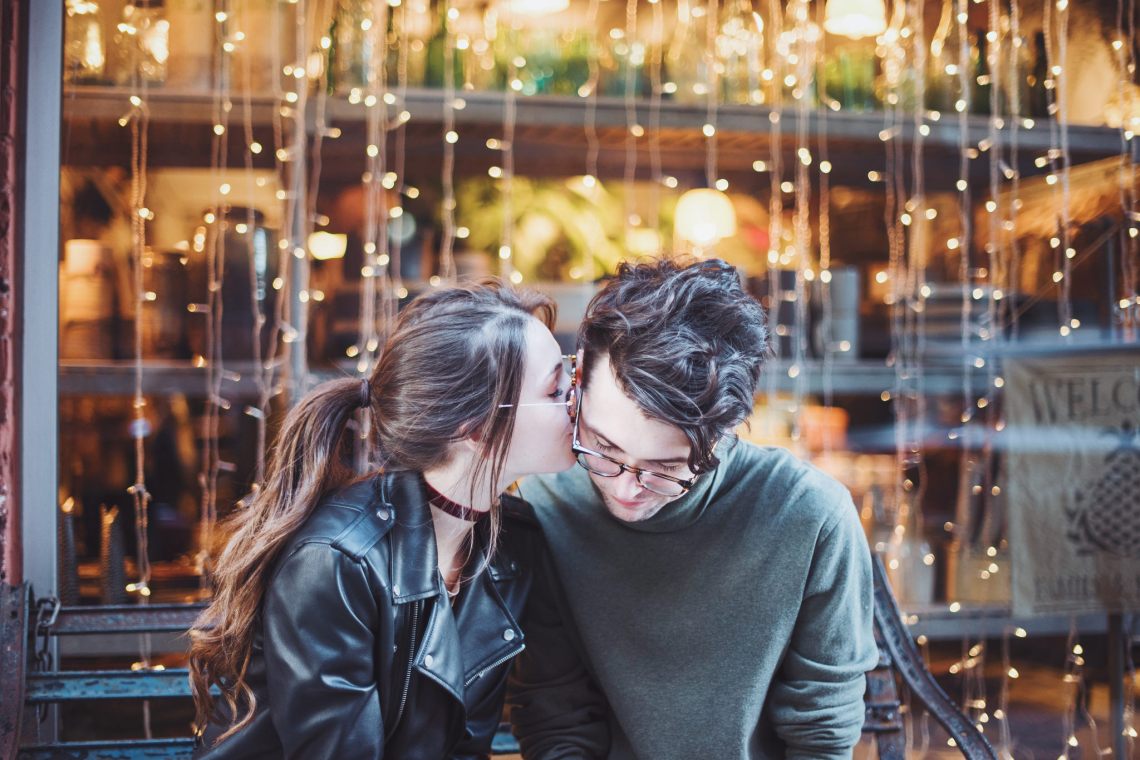 Bonus Article: The Difference Between A Friend With Benefits And A Guy Who Secretly Wants To Be Your Boyfriend

FWB relationships are intended to be solely about filling each other’s sexual needs. You generally talk minimally in order to ensure your feelings stay as far away from your sex filled relationship as possible. You make an agreement from the start that you’re not there to comfort each other when it’s 2 AM and you’re lonely, but you will come over at 2 AM to hook up and leave.

But the line and boundaries drawn in a FWB relationship are never crystal clear. There are always some loopholes, whether it’s one person (or both) falling for the one person they swore they’d only like sexually. It could be feelings, jealously, complications, or whatever your personal experience with your FWB turned out like.

Guys haven’t always been known for having a way with words and expressing their feelings, but here are a few signs that might indicate he doesn’t want to solely sleep with you, but he also wants to be a major part of your life.

1. He tries his best to act uninterested in your life, but always ask you about your day.

He is trying not to play like he’s too into you, but he still looks for a genuine answer when he asks how your day was while you’re lying in bed together.

2. He will bring up topics from the last time you saw each other.

If something happened at work that you brought up last time you were together, he will do a follow up question. He will try to slyly bring it in to the conversation like it just popped into his head, but he remembered what you said all along. He wants to try to fit into your personal life and built a relationship outside of sex.

3. He does random things like surprise you with a doughnut.

4. He suggests sleeping over.

If all he’s after is a FWB relationship he really shouldn’t suggest sleeping over, simply because that takes the whole ‘benefits’ thing to a whole other level (you’ll, like, actually be sleeping together). If you think you’re mature enough to have a FWB relationship you should be mature enough to realize that females tend to get attached and by having her sleep over you know that she will start thinking you want more. So just know if you’re asking her to stay the night she isn’t the only one who is starting to get hopeful.

5. He starts to ask if you want to do things with him.

He tries to keep it casual like going to a drive thru with him and he pay. Or him asking you to help him with some shopping because, you know, guys hate shopping. But it progresses and your relationship starts taking place outside the bedroom more and more frequently.

6. He asks you to go to family functions with him because, you know, his family is starting to question if he’s gay, or whatever excuse people make.

He used to only talk about minimal things in his life, but the longer you’ve had your relationship going the more he trusts you. The time you used to talk about random things after you had sex, now turns into “pillow talk” and he confesses things to you he usually wouldn’t tell others.

8. He brings you around to hang with his friends.

9. He asks about the other men in your life.

First you think he might just be curios if you’re sleeping with anyone else, but he kind of doesn’t let it go. Or he will always make jokes about how you’re always hanging around ‘Derek or whatever his name is’.

If you’re having a bad day, he is there for you. He tries to make you laugh or will call you just to talk. He takes thing further than just being FWB. He shows you effort and tries to be in your life and build a deeper relationship than just FWB.

Men are simple species most of the time and more than likely when they say they just want to be FWB that’s what they mean. They don’t want to further the relationship, they don’t want someone to hold hands with and go on dates with, they simply want someone who’s got the same mindset and agreed to satisfy each other’s needs in the bedroom. But things change, feelings are unpredictable and he might be one of the few who actually see something more than just sex with you.

I’m no expert, but those are all pretty good indications he wants to be more than FWB, he wants to be your boyfriend, and if you have the chat and he doesn’t, send him packing because he’s failed at giving mixed signals and you don’t need that kind of negativity in your life.