By Daniella Urdinlaiz Updated October 28, 2021
These Viking symbols are going to ignite your interest in Norse mythology.

Viking warriors were more than vicious brutes who caused bloodshed and sailed through open seas. They were much smarter than they are portrayed in popular media. They weaved fascinating stories and crafted meaningful Viking symbols. These symbols, from the Viking era, can give us a glimpse of their wisdom. If you want to learn more about the Viking culture, here are some symbols from Viking runes you should know:

Norse Symbols From The Viking Era:

In order to understand Vikings, you have to understand what was important to them. They had a strong connection to nature, certain animals, and their weapons. Here are some Norse symbols that will shed light on what really mattered to them: 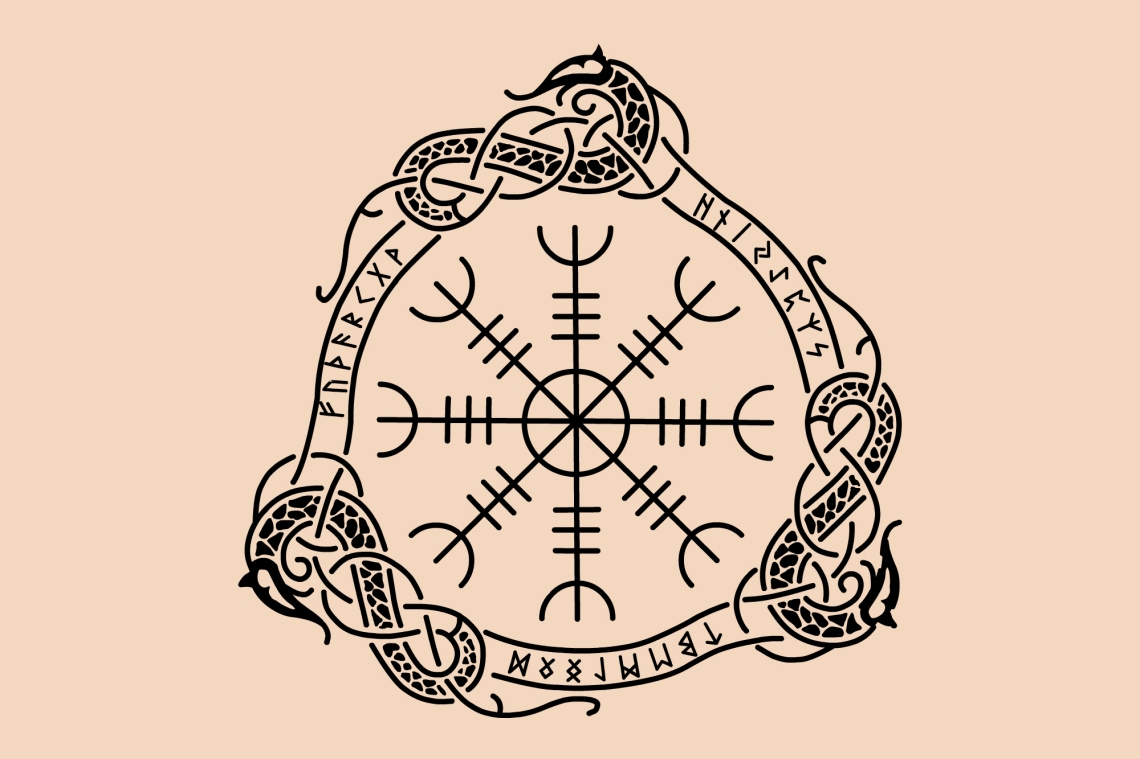 Aegishjalmur, The Helm Of Awe, is one of the most powerful Norse symbols in Norse mythology. The Helm of Awe contains eight spiked tridents that are defending the central point from the hostile forces surrounding it, which symbolizes protection and prevailing over enemies. This symbol was also associated with the power of serpents who paralyze their prey before striking.

Gungnir, The Magical Spear of Odin 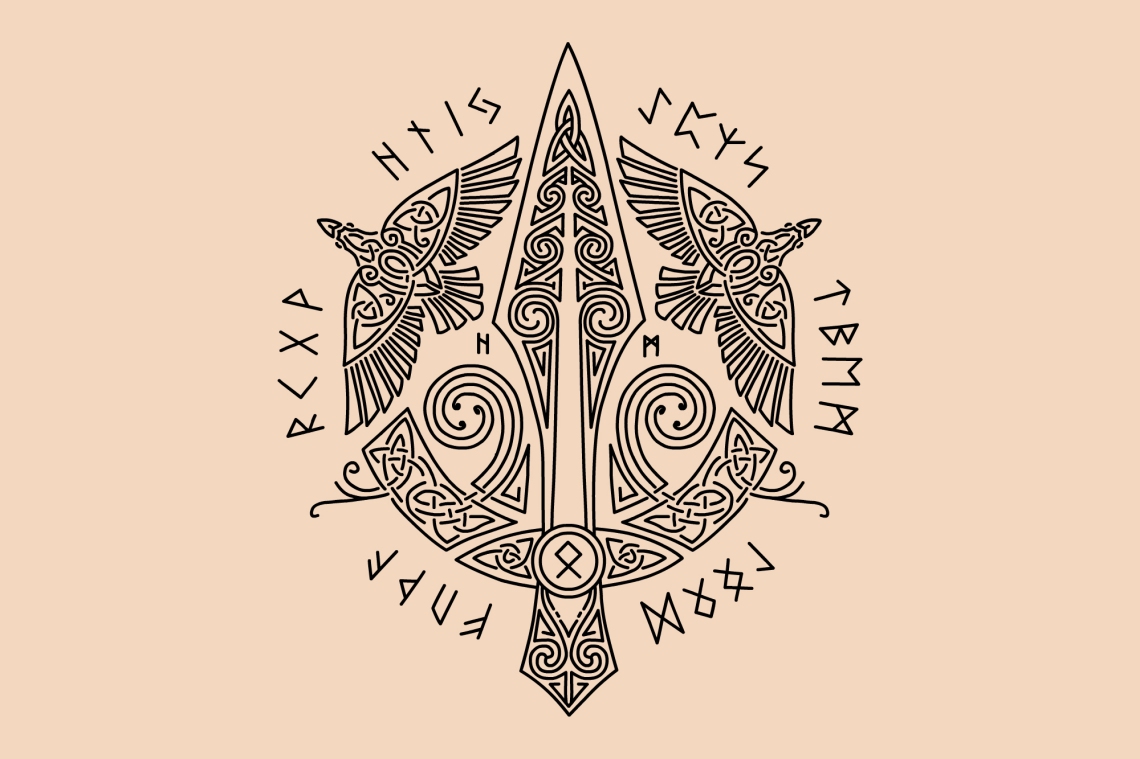 Gungnir is an extremely powerful spear that was created by the dwarves, the most skilled smiths in the cosmos. It contains ruins on its point that increase its aim and deadliness through magic. The image of Gungnir represents power and authority. 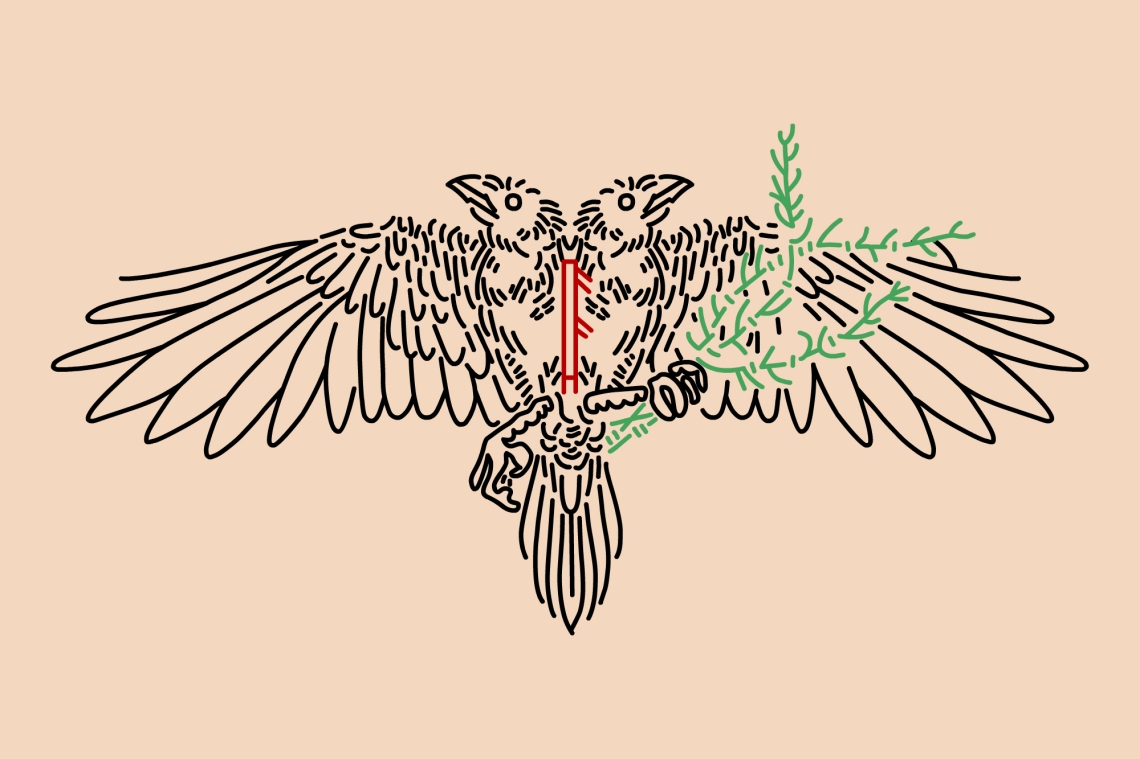 This is a famous Viking symbol. Odin’s ravens would fly the world during the daytime and return to him by breakfast to whisper all of the news they have seen and heard. Ravens are birds of blood and carnage, but they are also birds of wisdom and intellect. That is why this symbol represents both brutality and education.

Mjölnir, The Hammer of Thor 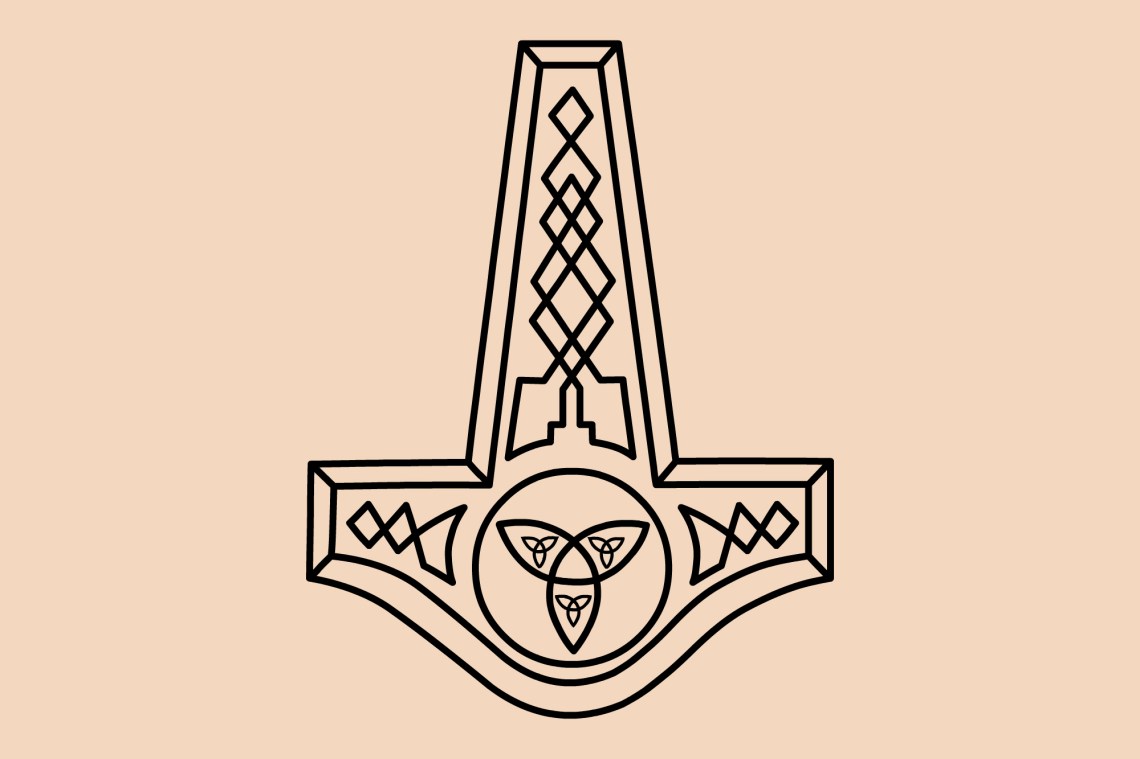 According to Norse mythology, Mjölnir is one of the most fearful and powerful weapons in existence. Even though it was used as a weapon by the thunder God, it was also used during ceremonies to bless marriages, births, and funerals. Despite the chaos the weapon was capable of achieving, this symbol represents blessing, consecration, and protection. 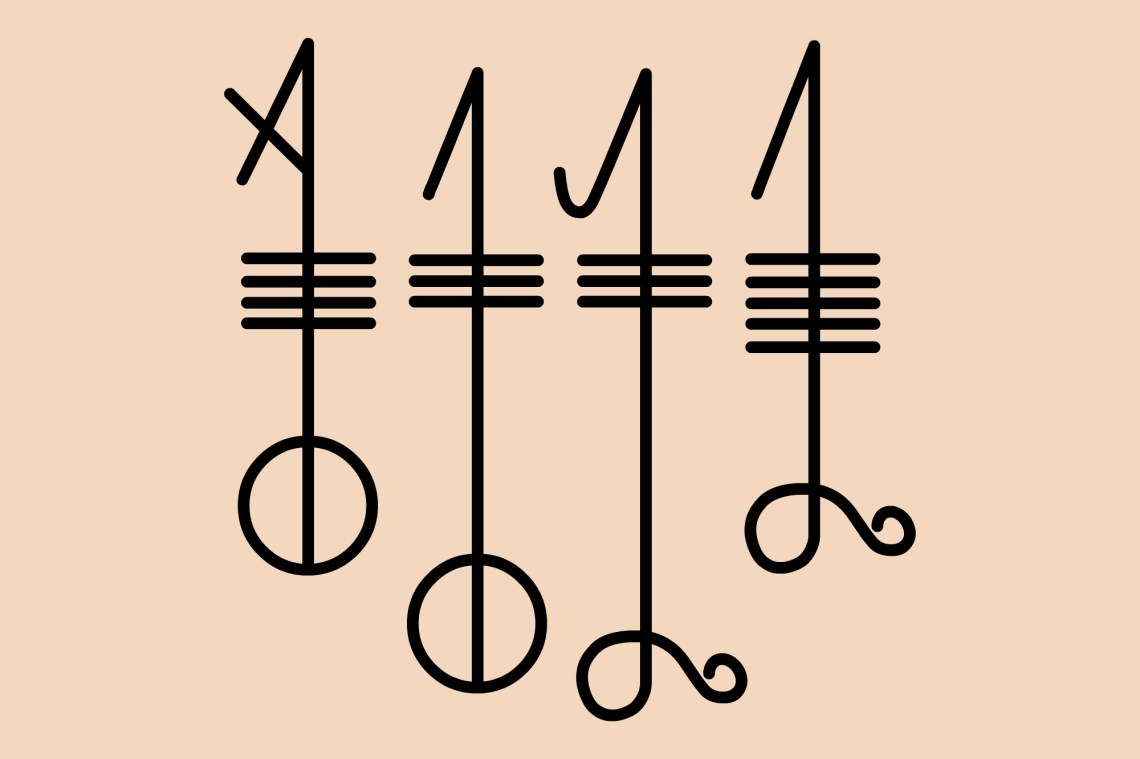 This is a famous Norse symbol. The Svefnthorn, which translates to ‘sleep thorn’, was used to put an adversary into a deep sleep they would have trouble awakening from. Even though the Svefnthorn was mentioned repeatedly in Norse mythology, this symbol has been seen drawn in two completely different ways and the exact symbolism is still unknown. 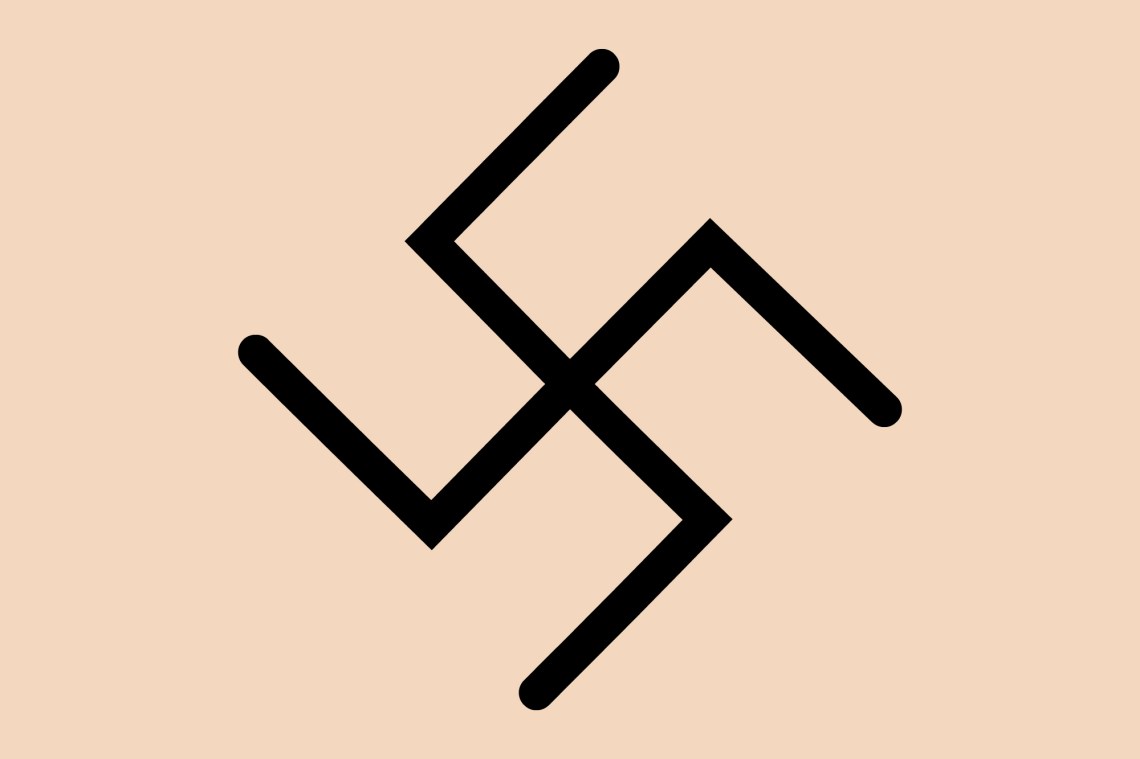 Even though this symbol has been tarnished by the Nazis now, in Norse culture, swastikas were closely tied to the sunwheel and Thor’s hammer. In fact, many hammers had swastikas engraved onto them. This symbol was meant to symbolize holiness, luck, safety, and prosperity.

The Triple Horn of Odin, The Horn Triskelion 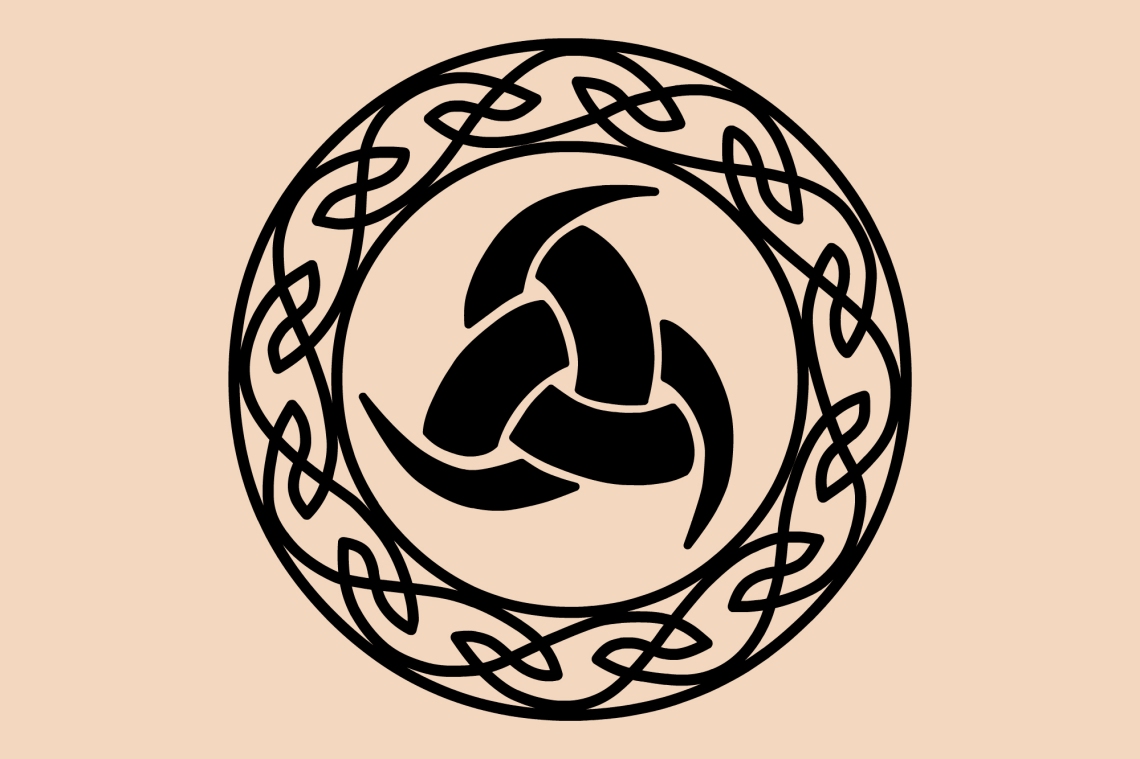 This symbol contains three interlocking drink horns, which is why it has become associated with toasting rituals. However, because the horns belonged to Odin, they also represent wisdom and inspiration. 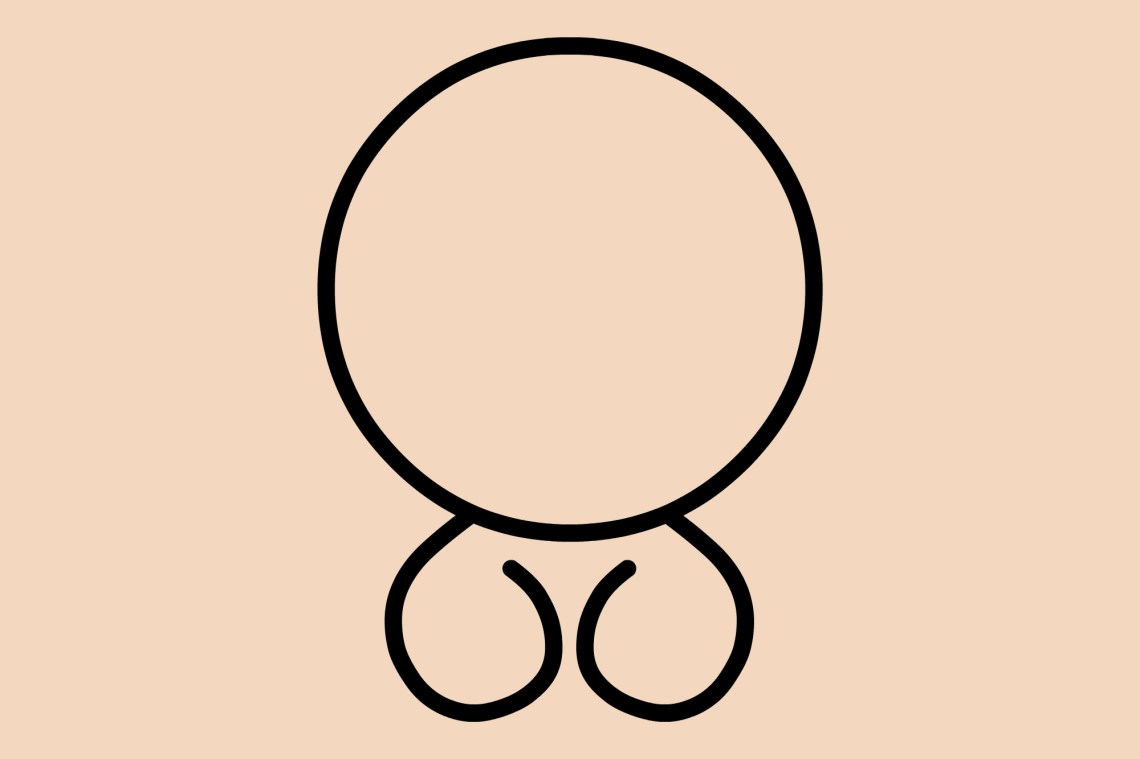 The Troll Cross was meant as protection against trolls and elves. It represents safety and deliverance from harm. When this symbol was present, the chances of falling into danger decreased. 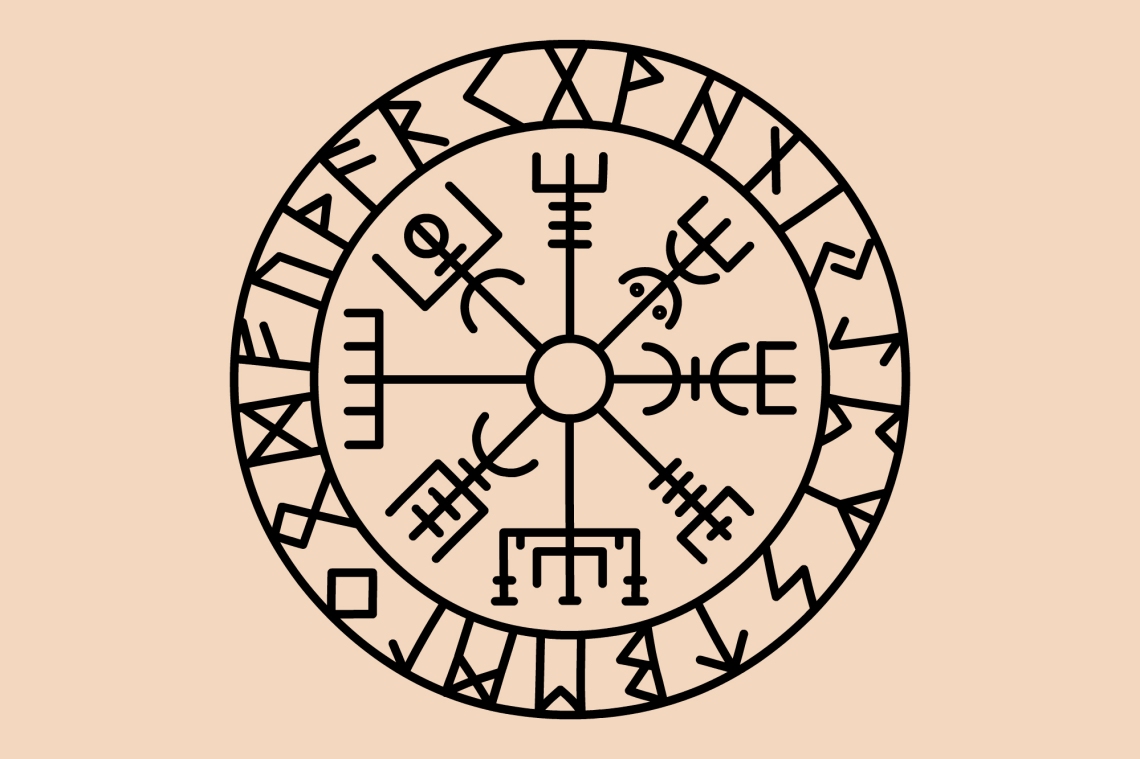 The Vegvisir, or That Which Shows the Way, is also known as the Viking compass. This Norse symbol is meant to act as a guide. The Huld manuscript says, “If this sign is carried, one will never lose one’s way in storms or bad weather, even when the way is not known.”

As long as this Viking compass was present, then one would arrive to their destination safely. This is why it would be drawn on Viking ships before setting sail. It assured Vikings would come home safely. 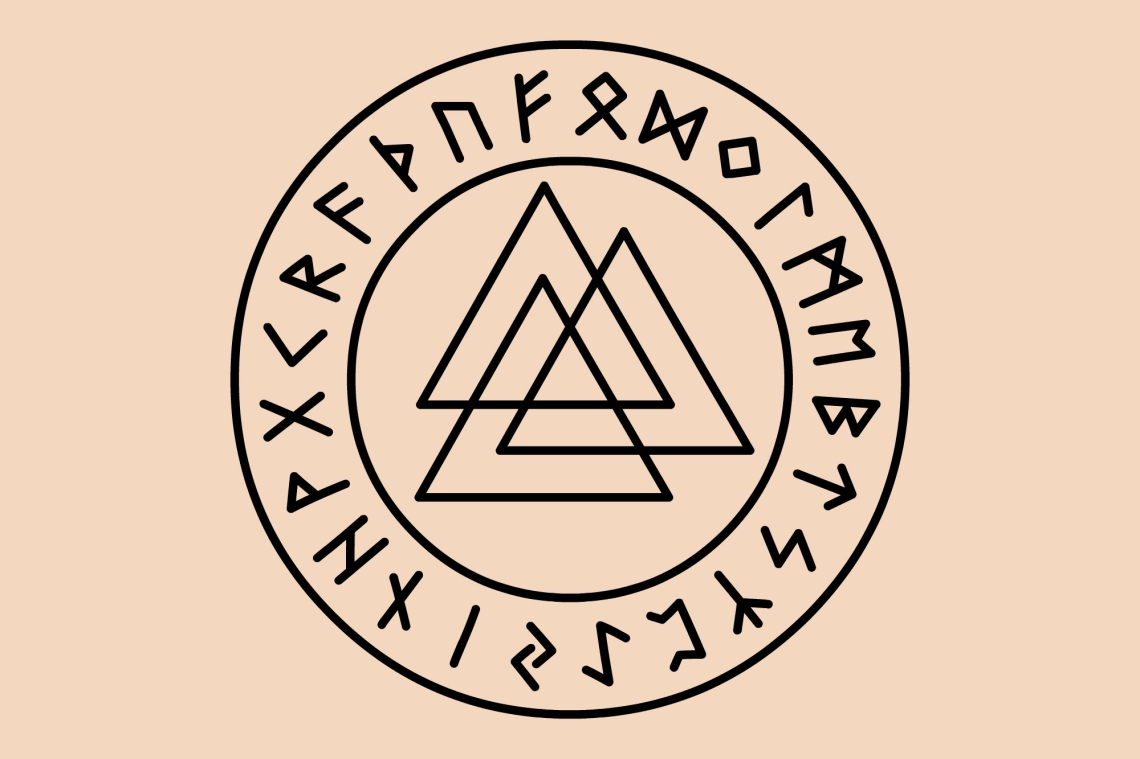 The Valknut symbol is a representation of the God Odin. It is also called Odin’s knot. This symbol commonly appeared on pictorial memorial stones and ship burials. It represents the transition from life to death and back again. It also represents the power to bind and unbind.

The Web Of Wyrd, The Matrix of Fate (Also Known as Skuld’s Net) 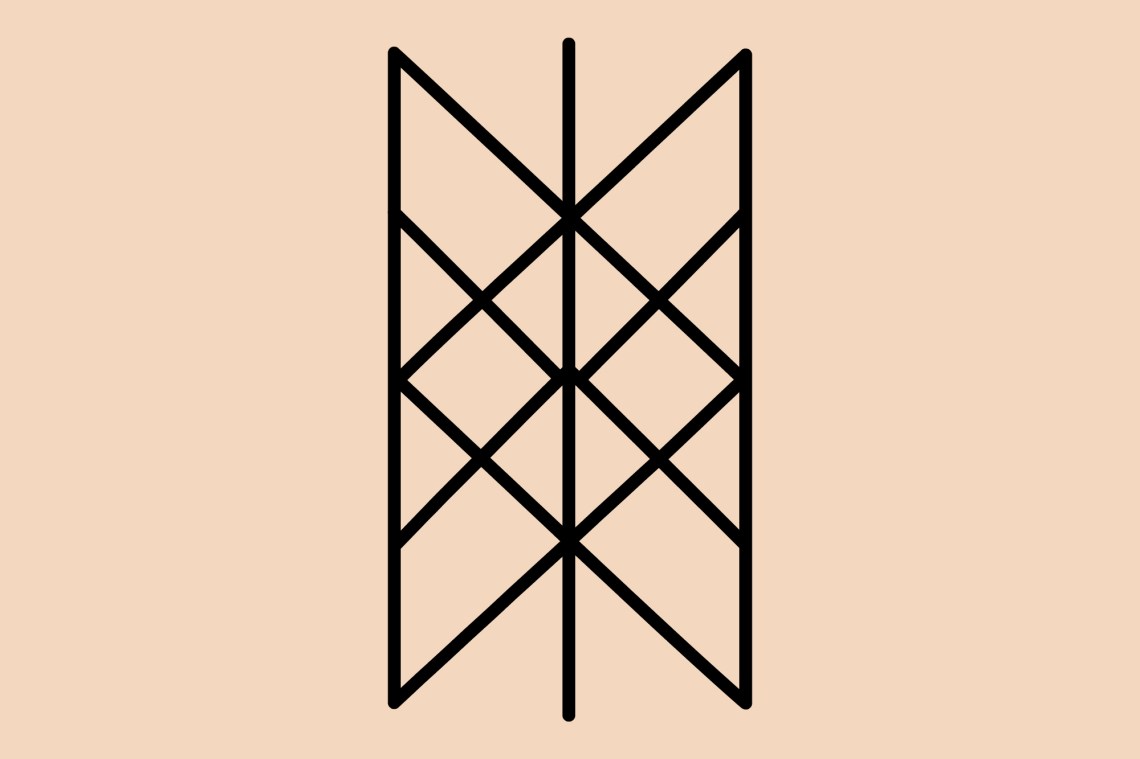 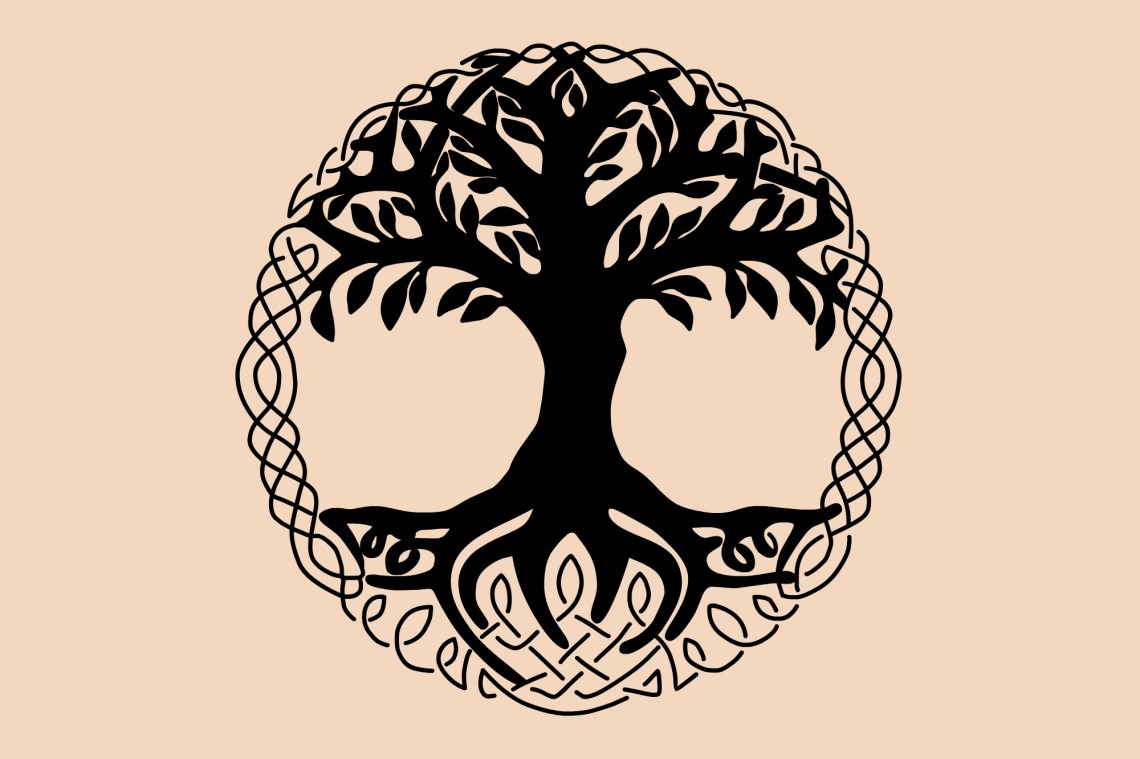 This is the tree of life, also known as the world tree. The branches extend over the nine worlds of northern mythology. Yggdrasil is a massive tree that holds together the nine realms of existence with its branches and roots. It reaches into the clouds and down into the underworld.

Snakes gnaw at the roots, squirrels scurry up the trunk, and an eagle perches in its branches, but it is still where the gods hold their daily council. It represents life, growth, and connection between all living things.

The symbols above are some of the most famous Viking symbols in existence. However, there are other symbols that are important to them. Here are more Viking symbols so you can learn even more about the way people behaved in the Viking age:

In Nordic mythology, this is a symbol of strength and bravery. Axes are the weapons Vikings used on the battlefield. They have a single edge and a bottom shaped like a hook.

Vikings believed in genies and dragons, but many of the mentions in sagas were not physical beings. Dragons were commonly meant to symbolize brute force. That’s why Viking longships were called Dragon Ships.

The bear was an important animal in the Norse era because they represent brute strength and bravery. The bear inspired berserkers, who represent the most popular and the best-known class of the Vikings.

This was the ship of all the Norse gods. The name translates to assembled from thin pieces of wood. It is sometimes spelled as Skidbladnir or Skithblathnir.

This is one of the most famous Viking symbols. This symbol is mentioned in Norse sagas regarding the deeds of Viking heroes. This symbol is drawn as a protection symbol or a symbol of identification. It can also come in the form of a tattoo.

This is a giant serpent. It encircles the seas of Midgard. Prophies said that he would fight against Thor in a battle to the death.

Gullinbursti is a boar in Norse mythology with bristles in its mane that glow in the dark. Eitri threw a pig’s skin into a furnace as Brokkr worked on the bellows. This created Gullinbursti.

Sæhrímnir is the creature killed and eaten every night by the Æsir and einherjar. Andhrímnir, the cook of the gods, is responsible for the creature’s slaughter and preparation. After it is eaten, it’s brought back to life again the next day.

In the Viking age, this was an eight-legged horse ridden by Odin. This animal is referred to as the best of all horses. It is sometimes ridden to the location of Hel.

This was a wolf, who was one of the most frightening creatures in Norse mythology. The gods tried to bind him, but Fenrir broke every chain. The gods had to place a sword in his mouth to stop him from snapping. From his drooling mouth, a river called Ván flowed so he could take revenge.

The Vikings believed cats were spirit animals of the Vanir goddess, Freya. She was the goddess of love, sex, and romantic desire. However, she was also a fierce goddess of war. She rode into battle on her wild boar, Hildisvini.

If you’re interested in learning more about Vikings, then there are plenty of more fun facts that might interest you. After all, the movies don’t always get it right. What you’ve seen on the big screen could be misleading. Here are a few fun facts about Vikings that are going to make you look at them in an entirely new light.

The movies you’ve seen about Vikings got their outfits all wrong. The few, rare Viking helmets that were discovered didn’t have horns on them. Horned helmets were a creation by a costume designer named Carl Emil Doepler for an 1876 production of Wagner’s Der Ring des Nibelungen.

Viking women had some rights.

Women were expected to marry the person their parents picked for them. However, they were allowed to divorce and remarry. Unfortunately, most women died between 25 and 30 due to childbirth complications.

Vikings were known for their excellent hygiene.

Even though Vikings are commonly portrayed as dirty and rugged, that is far from the truth. They kept tweezers, razors, combs, and ear cleaners made from animal bones.

Viking men spent most of their time farming.

Vikings are known for being brutal murderers who pillaged towns, but that’s not all they would do with their time. They spent a lot of time farming, so they could feed their family. They also raised cattle, goats, and pigs.

Most days of the week are named after Norse gods.

Vikings would ski to get around. It was a common form of transportation for them. They would also ski recreationally.

Vikings buried their dead in boats.

Vikings only ate twice per day.

Their first meal, which was technically breakfast and consumed right after waking up, was known as dagmal. Their second meal, eaten at the end of the day, was known as nattmal.

The victims of Vikings paid them to prevent them from attacking.

In the later part of the 10th century, the French and English would pay Vikings to leave them alone. They would receive silver that added up to 27,000 kg of precious metal.

The jarls were the nobility who owned large portions of land and livestock. The karls were freemen who made up most of the workforce. And the thralls were slaves who were forced into menial labor.

After sailing west from Norway, the Vikings discovered the Faroe Islands in the North Atlantic. They also discovered new areas in Iceland, Greenland, Newfoundland, and North America.