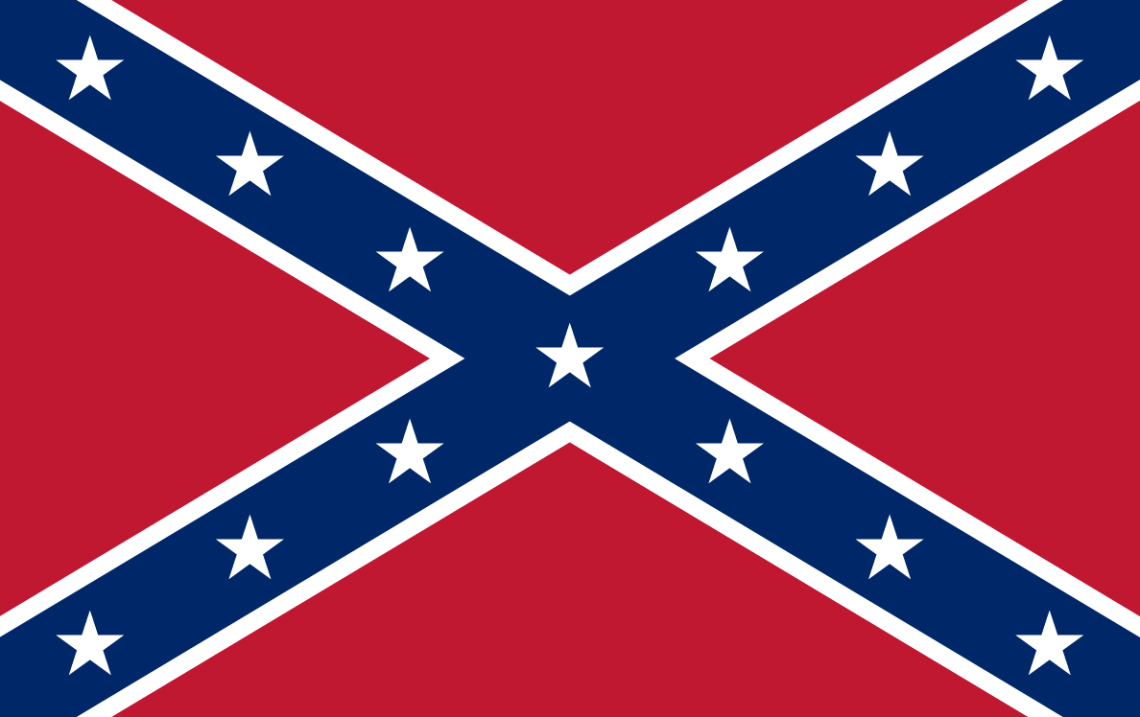 2. I’ve heard news reports claiming the above flag is the flag that Robert E. Lee’s Army of Northern Virginia used while going into battle. That too is incorrect. Robert E. Lee’s flag wasn’t rectangular. It was square and looked like this.

Similar? Yes. The same? No.

That was the final version. The first version looked completely different and the flag was changed almost yearly.

5. The rebel flag as depicted at the top was a battle flag, not a national flag. It represented conflict and war and everyone living during the Civil War and immediately afterwards knew that. People today seem to think it’s the actual Confederate Flag and it’s often associated with a notion of Southern pride. If that was so then it would need to be Tennessee pride, not Southern pride.

In short, it’s not the Confederate flag at all.

6. Tennessee pride today looks like this though. This is great sausage, btw.

9. Nationally, less than 1 in 10 Americans look at the rebel flag and have a positive reaction to it. [Source]

11. Nationally, 58% of Americans have no reaction to it at all aka they could care less. [Source]

12. Given the racial connotations behind the rebel flag you might think that all Black Americans universally hate it. They don’t. Nationally, 45% of Black Americans polled say they have no real reaction to it at all. [Source]

13. Nationally, 41% of Black Americans do state that they have a negative reaction to the flag. I found this surprisingly low but perhaps I shouldn’t have. [Source]

14. The rebel flag is relatively new as a Southern symbol. In fact, it wasn’t a part of any state flag until after the Supreme Court ruled on Brown v Board of Education and forced the integration of public schools. Georgia made it a part of their state flag two years afterward in 1956. Here’s what it looked like at that time.

16. Mississippi has gone the opposite direction. In 2001, the state of Mississippi had to choose a new flag. They had two choices. This:

This second design had a very interesting meaning, historically.

On a vote of 65% to 36%, Mississippians chose to include the flag of the Army of Northern Virginia into their state flag instead and picked the top one.

17. 56% of people asked state that they believe that the rebel flag is “still relevant to American politics and American life.” [Source]

18. 39% said that it was of historical relevance but that it had no relevance in modern politics. [Source]

19. In 2000, the rebel flag, which had been flown from atop the South Carolina capital building, was taken down per legislation by the state senate. A historically accurate version of the flag was then flown in front of the capital near the Confederate war memorial there. [Source]

20. A poll in 2005 revealed that 74% of Black South Carolinians would have preferred to see the flag not be flown at the capital at all. [Source]

Jose Marti: The Visionary Cuban Leader Everyone Should Know About (But Probably Doesn’t)

The Unfortunate Consequences Of ‘Correcting History’