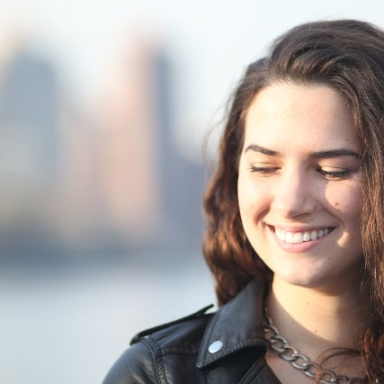 I imagine that preparing for highly anticipated sex is a lot like planning a fancy dinner party. I don’t cook, so I may never test the validity of that hypothesis, but both involve a lot of painstaking planning, timing, and meticulous work. I’m sure some women are mature and self-actualized goddesses who don’t feel the need to shave, groom, or do anything before they get naked and touch another human being that they really, really want to touch. I am not one of them, and I’d like to formally salute the other anxious ladies in this world with this one.

1. We shave. Shave it all. If I could afford it, I would most definitely have a wizard with a laser remove all of the hair from my legs and underarms, and possibly even my bikini line if that’s a thing that we do now. I would tell her to put that shit on Star Wars-style blast and burn off all of my body hair until I can walk up to a newborn and be like, “Ew, you hairy beast.” Okay, I’m not a monster, but you get the point. I want that shit gone. I kind of could afford it if I used a Lifebooker coupon, but I’m not sure that I believe in using coupons when it comes to lasering one of my major organs. I know, I know. I don’t need to shave and many women don’t. Gender norms, femininity; I have my Tumblr Bachelor’s degree, I get it. But something about the feeling of rubbing my freshly shaved and lotioned legs together makes me feel like, twenty times more stoked to get naked with another person. God bless to all of you out there who shave your arms. It’s traumatic enough for me enough to find missed patches on my legs after spending twenty minutes dragging a tiny blade up them ever so gently, so I can’t imagine the kind of angst that comes with finding an orangutan patch on the arms you work so hard to keep weirdly smooth. Trust your struggle.

2. We tweeze and wax. Oh, you didn’t think my eyebrows were instruments of seduction? Au contraire. If you’ve been on the Internet (cool, shitty place FYI) in the past year, you know that ‘eyebrow game’ is a thing. And few things make me feel like a new woman like shaping my eyebrows into strong and beautiful bitch-in-charge contours above my eyes. When I win the eyebrow game, best believe I’m feeling like I could kick even Cara DeLevigne’s bushy browed ass. Also, I wax my upper lip because I’m Sicilian and I don’t want a mustache. It’s true. If you and I were ever stuck on a deserted island together, I would probably look like Mario within four months. That truth is not sexy to me, so I buried it with years of waxing, never to see the light of day, or the dark of any dude’s apartment.

3. We tell our friends we’re going to have sex with you. Sorry. Maybe this doesn’t apply to all of you moral angels out there in this online world, but if I’m planning on having sex with a guy, I’m also telling two different group texts of my closest friends that I’m going to do so. Why? I don’t know. It’s a lot like sending them pictures of me in a dressing room in different outfits I’m trying on. It’s fun and stops me from making a terrible mistake out of desperation. Sorry, shitty guys and girls of the world who have fucked a lot of people over. There is a roadblock on your path. Try Tinder.

4. We think about it. We think about what you’re going to look like naked, if you’ll be the kind of person who uses all soft, light touches that almost tickle, or if you’ll be the kind who makes strong grabs that feel confident and sure. We think about when it will happen, what the color of your sheets will be. For the love of God, we hope you’ll have sheets. But I digress. Girls think about sex. We think about it a lot. We’re told that we don’t and shouldn’t think about it as much as guys, but then we do, and we catch ourselves saying things like, “I’m acting like a dude.” No, you’re normal. Whether we’re thinking about having sex with a guy or a girl or just sex in the abstract of maybe wanting to have it sometime with someone, we’re still thinking about sex. Human beings are kind of into that in general, regardless of gender. Science!

5. We plan. The logistics of this are essential. If I’ve already put all this time and hair removing into it, then we’d better make it good. I’m not trying to do this drunk after we run into each other at the local bar. We’re making plans, whether it’s dinner, or Netflix, or brunch, or getting stoned in your car and then watching Netflix, there’s going to be a before, during, and after. I’m planning the day and the time and the thing. Maybe I’m planning what I’ll wear. Maybe we’re thinking and planning and doing all of this because we’re nervous and want to be confident, or maybe it’s just a matter of making the time pass between then and now, until there’s no distance, time, or space between us. Until it’s just you, and me, and no before, nothing left to do but what we want to do.

Sex Advice From A Gay Man Who’s Never Had Sex

31 People Answer ‘What Is Something You Love In Bed, But Are Too Embarrassed To Tell Your Partner’

Hey Girl: You Don’t Have To Shave Anything You Don’t Want To

I Grew A Massive 70s Bush

In Defense of Pubic Hair (And The Freedom Of Choice)