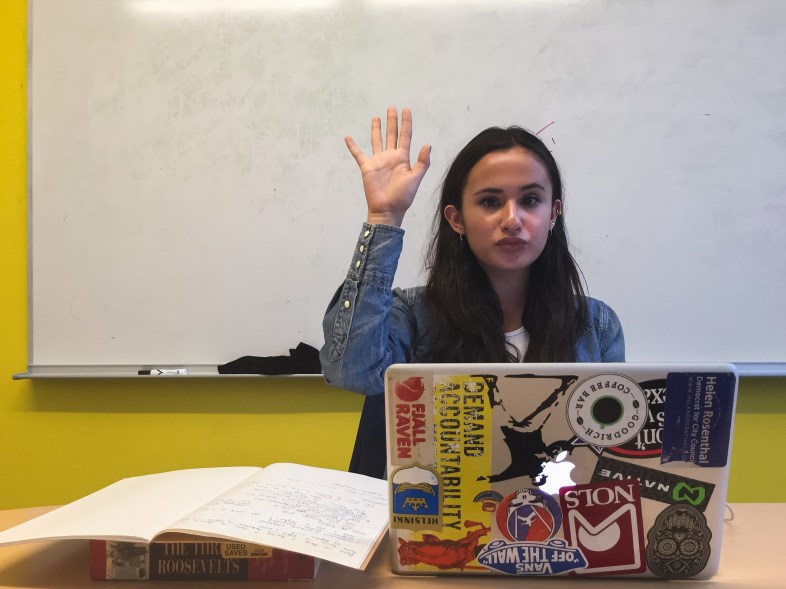 1. The personal anecdote MONSTER. Like no, Daniel, I do NOT care about a weird conversation you had with your grandpa about your dad and neither does literally a single soul here.

2. The sadist who asks, “are we still having the quiz today?” when the professor had clearly forgotten all about. I’m actually so confused, Daniel…

3. The person who brings the most distracting, fragrant ass food to class. Like Daniel, can u maybe NOT bring a whole chicken bacon ranch pizza to lecture???

4. The fervent intellectual masturbator who will apparently die if they don’t make a rogue, tangential philosophical reference during every. Single. Class.

6. The DEEPLY TORTURED soul who raises their hand when class is already running a minute over. Daniel u must literally want everyone here to hate you.

7. That one kid who insists on sitting right next to you in a lecture hall when there’s more than enough space to like… not.

8. The bold soul who struts into class 15 minutes late with music blaring through their headphones. Everyone make way for King Daniel, to whom *the rules* do not apply!

9. Bad liars, like that lawless motherfucker who’s been pretending to have laryngitis all semester. That excuse is almost as foolproof as saying “my dog ate my homework,” Daniel.

10. The hardo whose hand shoots up every time the professor asks who’s read *insert obscure book title* and you know this motherfucker couldn’t have POSSIBLY read all those books/watched all those movies/listened to all those live jazz performances because they’ve only lived 20 years of life so far.

11. The straight white dude that is addicted to saying fucked up shit, so the class gets tangibly unsettled whenever he raises his hand.

12. The shameless kiss-ass who stays after every single class to ask an UTTERLY useless question just so the professor can see them putting in the slightest extra work.

13. …Usually the same student who spends so much time in office hours that the professor references their hang time like, “Daniel and I were talking about this just the other day…” DAMN DANIEL! Back at it again with doing THE MOST.

14. The worthless group member who, without a hint of irony, laments having to skip the project meeting in order to attend Taco Tuesdays.

15. The overly confident student who says the craziest, most ambiguous shit just for the sake of participation.

16. Anyone who starts a comment with “piggybacking/snowballing off that…” or “similar to Daniel’s point…” non-ironically. Like girl BYE, Daniel’s point was dumb anyway, I truly don’t need you to repeat an observation that’s literally just been made.

17. Or, alternately, anyone who starts a comment with “going off that…” and then says something completely unrelated. WAKE UP, DANIEL.

18. People who insist on exposing/picking at their nasty ass feet. Cannot.

19. The no-note-taking smartass who doesn’t even bring a pen to class. Like I’m so sorry Daniel SHOW SOME RESPECT and just pretend to write something down because I am personally offended by ur pretense.

20. Nauseatingly self-righteous liberals with political laptop stickers who roll their eyes when they say things like, “if trickle down economics were a real thing…”

21. People who suck at bullshitting.

22. The token argumentative person who is just blatantly wrong about everything but refuses to shut the fuck up!

23. The class shit-stirrer who disclaims every single comment by saying “just to play devil’s advocate…” like no Daniel you’re just a ignorant motherfucker who genuinely thinks drug testing welfare recipients should continue to be a thing SMFH.

24. The person who somehow manages to reveal their racism/sexism/classism in every class, burdening you with constantly having to correct their entire existence.

25. People who dramatically flip through their thoroughly annotated readings to prove they did them. We get it, Daniel. I promise u. We get it.

26. The kid in big lectures who makes a habit of answering the professor’s rhetorical questions. You look actually crazy rn, Daniel.

27. Anyone who utters something along the lines of, “well my dad actually worked his way through college and out of poverty so like I just don’t see how cycles of poverty exist.” Cool story, Daniel! Tell it to the 45 million Americans who are living under the poverty line! :)

28. The person who literally thinks they own the topic and the major and time and space and gets frustrated at other people for taking their “thing.”

29. And, of course, anyone who won’t shut the fuck up about their thesis.