Skip to content
Report This Article
What is the issue?
This is a copyrighted excerpt from the bestselling book, Becoming the Narcissist’s Nightmare: How to Devalue and Discard the Narcissist While Supplying Yourself.

Society assumes that everyone has a conscience and the ability to empathize. In fact, 1 in 25 people in the United States are estimated to be sociopaths, according to Harvard psychologist Martha Stout. Narcissists (those who meet the criteria for Narcissistic Personality Disorder) and their like-minded cousins, sociopaths and psychopaths, speak in the language of crazymaking, of projection, of gaslighting and of pathological envy. While I will be focusing on narcissistic abusers in this post, keep in mind that all three are unable to empathize with others and frequently exploit others for their own agenda. If you encounter someone with narcissistic traits, they could very well fall towards the extreme end of the psychopathy spectrum and be a sociopath or psychopath.

These pathological individuals walk among us every day in their false masks, often unseen and unnoticed because of how eerily normal they are.

They can be of any gender, background, and socioeconomic status. Often times, they are charming, charismatic, the life of the party, able to hook their victims in and dupe the public effortlessly. It’s very possible you’ve dated, worked with, had a family member or friend with Narcissistic Personality Disorder or Antisocial Personality Disorder in your lifetime – even if you didn’t know it then.

Learning their emotional language means acknowledging that their cruelty is not only explicit but implicit, deeply ingrained in nuances in their facial expressions, gestures, tones, and most importantly, the contradictory mismatch between their words and actions. Most importantly, their cruelty is deliberate and designed to control and ultimately destroy their victims.

Their manipulation is psychological and emotionally devastating – and very dangerous, especially considering the brain circuitry for emotional and physical pain are one and the same. What a victim feels when they are punched in the stomach can be similar to the pain a victim feels when they are verbally and emotionally abused, and the effects of narcissistic abuse can be crippling and long-lasting, even resulting in symptoms of PTSD or Complex PTSD.

These types of abusers are fluent in manipulation, well-versed in sadism, in control and in rage – their deliberate cutting down of you, which can be best described as “death by a thousand cuts,” can be just as slow and insidious as it is swift and vicious. It is akin to psychological and emotional rape – a sordid violation of boundaries and of the trust the victim has given his or her abuser.

Narcissistic abusers can attack at any given moment, using their choice weapons of sarcasm, condescending remarks, namecalling, and blameshifting whenever they perceive you as a threat or whenever they need entertainment in the form of an emotional reaction. They can also use their nonverbal language in the form of a sadistic smirk, the cold deadness in their eyes while professing to love you, their bored, sulky looks or their cruel laughter to bully you into believing that you are inferior to them.

Survivors spend much of the “devaluation” phase of an abusive cycle (the phase where they are thrust off the pedestal, only to be demeaned and degraded) constantly on their toes, careful not to make a sound lest they incur the wrath of their narcissist. Yet walking on eggshells doesn’t help, as the narcissist can and will use anything and everything you’ve said or done against you as a way to destroy you.

There are three key pieces of information that narcissists frequently collect in the “idealization” phase of the relationship where they are first lovebombing and grooming you with excessive attention, that they later wield against you in the devaluation and discard phases in their special language of depravity.

1) The flaws, shortcomings, insecurities and secrets you’ve confided in the narcissist about. The narcissistic abuser rejoices when you share your wounds, your struggles, and your triggers early on. It is then that much easier for them to get underneath your skin and inside of your mind. During the early stages of the relationship, which are likely to include lovebombing, you are likely to feel so trusting and open with a narcissist that you share everything with them: your past, your heartbreaks, what you perceive to be your flaws.

You may see this as a way of establishing rapport, a connection with your partner, a way of being vulnerable and intimate. A narcissistic abuser sees it as dinner laying itself on the table. They will pretend to support you and empathize with you when you reveal these to them initially, but will later use these to provoke you, belittle you and demean you during the devaluation phase.

Remember: the narcissist has no limits as to what he or she will use.

If you tell your narcissist you’re insecure about your weight, be prepared for covert and overt put-downs about your body in the devaluation phase. If you reveal to a narcissist that you’ve been through a past trauma, such as being sexually assaulted, it won’t be long before they are using degrading lingo in the bedroom to make you feel like a used object. They thrive on the fact that you are being retraumatized. Their ability to make you regress right back into the original trauma with just one turn of phrase makes them feel powerful. And they live for that power, because it is the only power they have in their empty lives.

To a narcissist, any open wound is an invitation to cut deeper and the narcissist can and always will cut a wound even deeper than the first.

2) Your strengths and accomplishments, especially the ones they are pathologically envious of. Initially when you were on the pedestal, the narcissist couldn’t get enough of your strengths and accomplishments. They couldn’t stop raving about you to family and friends, showing you off, treating you like a trophy, an essential part of them. Their association with you inevitably made them feel superior and important. It bolstered their false image of being a normal human being who could get a “prize” like you.

In the devaluation phase, a narcissist will literally translate your strengths into perceived flaws. Once you were “confident and sexy,” – but now you’re “cocky and vain” (a clear projection of themselves, of course). Before, you were “intelligent and driven,” and now you’re just a “know-it-all” or a “smartass.”

They gaslight you into believing that your value and worth is not real, all while projecting their own sense of inferiority onto you. They will degrade, minimize, and ignore what you accomplish, now acting as if it means nothing to them and as if it is of little importance or value to the world. They will feed you falsehoods about your lack of competence and ability. They will claim to be better at you, all the while stealing your ideas. They will taunt you into believing that you’re not capable of the smallest of tasks, even if you are out of their league professionally and personally. They will threaten to ruin your reputation and they will often sabotage major events as well as support networks you may have, attempting to turn everyone against you. They will trample upon your dreams, your aspirations, your beliefs, your personality, your goals, your profession, your talents, your appearance, your lifestyle – all the while extolling their own.

Their sudden turn of language takes a toll; it is traumatizing, shocking and unexpectedly vicious. Everything they once praised will inevitably be turned and twisted into a weakness. This is because they cannot stand you “winning” and being better than them at something. To them, everything is a competition and a game that they must win at all costs. They seek to destroy you in every way possible so that you, in turn, destroy and sabotage yourself – all the while they sit back, relax and watch the unraveling of everything you’ve worked hard for.

3) Your need to please them and their need to be perpetually dissatisfied. The narcissist cultivated your need for his or her validation and approval early on in the idealization phase. By making you dependent on his or her praise, they conditioned you to seek the excessive admiration that only they could dole out. Now, as they devalue you, they use your need for validation to their advantage by withdrawing frequently, appearing sullen at every opportunity, and converting every generous thing you do for them as a failure on your part that falls short of their ludicrous expectations. Nothing can meet their high standards and everything wrong will be pointed out. In fact, even the things they do wrong shall be pinned on you.

Their blameshifting language, passive-aggressive sulky behavior and narcissistic rage at the slightest injury becomes all-consuming for the victim, as the victim attempts to strengthen his or her efforts to meet the standards of the narcissist – standards which inevitably set the victim up for failure. For this, the victim is met with verbal assault, accusations and unfair comparisons which instill in him or her a pervasive sense of worthlessness and never being “enough.”

If the victim ever attempts to make the narcissistic abuser accountable for being a decent human being, they will lash out in rage, blaming them for the abuse and stonewalling the victim into silence. They love to have the last word, especially for the language they’ve created.

Taking back our control and power from a narcissistic abuser means going to war with the language they use against us. We must create in its place what I call a “reverse discourse” – a new language and a rewriting of the narrative that instead lifts us, motivates us, inspires us and revives us by replacing the narcissist’s cutting words with our own powerful truth. 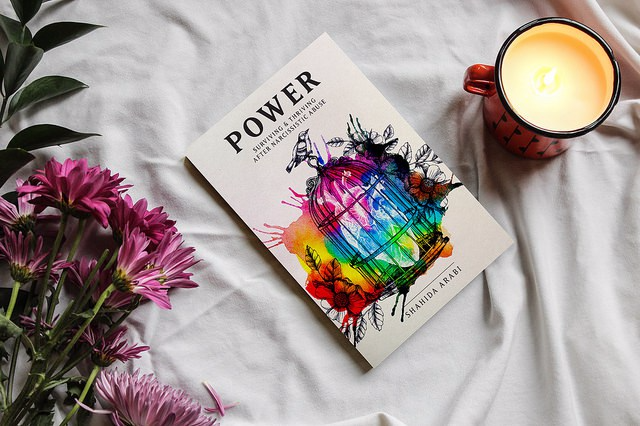 How To Move On From A Narcissist

6 Common Emotions You’ll Feel When Dealing With A Narcissist

The 8 Stages Of A Toxic Relationship