One of the most common misconceptions regarding behaviour change is relying on motivation to begin new, positive behaviours and willpower to refrain from old, negative behaviours.

The problem is (1) Motivation is unsustainable in the long-term and a lack thereof can be used an excuse not to start. That’s why habits trump motivation: Once a behaviour becomes a habit, it becomes automatised and you become less dependent on motivation to begin.

And (2) Willpower is like a muscle. The more decisions you make in a day, the more fatigued it becomes; to use a strength-training analogy, think of your willpower as “training to failure”. And when that happens, you’re more likely to succumb to the temptation of bad habits. This is known as “Decision Fatigue”.

However, what if you could bypass motivation and willpower entirely when implementing new behaviours? You can – once you understand “Choice Architecture”.

Carolyn was a director of food services for a large city school system and was in charge of hundreds of schools, with hundreds of thousands of children eating in her cafeterias every day.

One day, after a conversation with a friend, Carolyn decided to conduct an experiment. Her hypothesis was as follows: Without changing the menus, would manipulating the way the food was displayed and arranged in the cafeterias, influence the children’s purchasing decisions?

Carolyn gave the directors of dozens of schools specific orders on how to display and arrange the food. For example, in some schools, the deserts were placed first, in others, they were placed last and even in a separate line. French fries were placed at eye level and in others, carrot sticks.

Carolyn’s prediction was correct: The consumption of many healthy foods increased by as much as 25%.

School children, like adults, can be greatly influenced by small changes in the context.

The big lesson here is small and apparently insignificant details can have major impacts on your behaviours. And those details are often a result of how you design your environment.

According to B.J. Fogg, a professor at Stanford University, in order to do a behaviour, you need three elements: 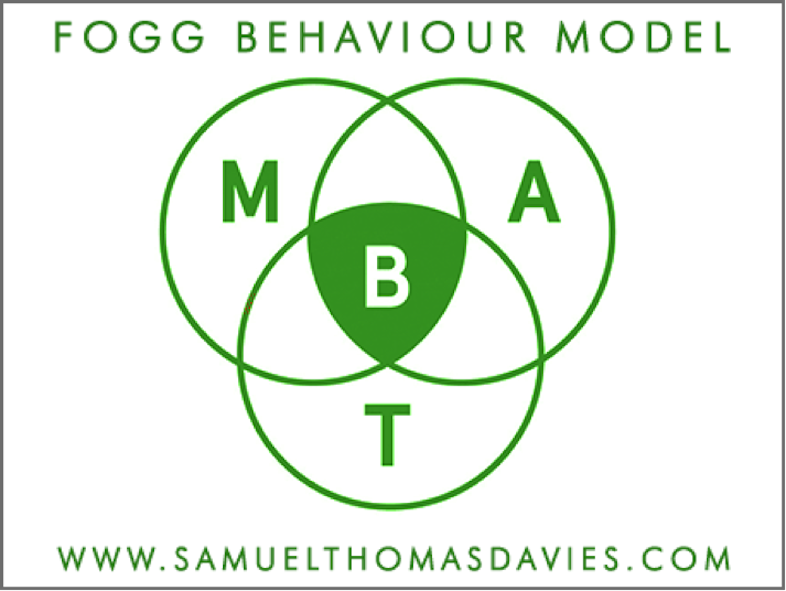 In order for a behaviour to happen, a trigger, and the ability and motivation to do it, must all converge simultaneously. [2]

For example, let’s suppose you want to lose 14 pounds and start running every day after work. You may have the ability and motivation to run, but if you don’t identify a suitable cue – like running as soon as you return home – you’re unlikely to resist the temptation of a bad habit like watching television because it’s easier. The path of least resistance is hard to resist.

However, what if you were to remove the ability to watch television?

Decision makers do not make choices in a vacuum. They make them in an environment where many features, noticed and unnoticed, can influence their decisions. The person who creates that environment, is, in our terminology, a choice architect.

If we return to the previous example, if you removed the batteries from your remote control and placed them in another room; repositioned your living room furniture and unplugged you television; you’re removing your ability to do it with ease.

In other words, you’re designing that behaviour to be less accessible. You may still have the trigger and the motivation to do it – and if you really want to do it, go ahead – but because your ability to do it has been reduced, you’ll feel more resistant.

Similarly, if you placed your running shoes by your front door, your running clothes out and shrunk the self-compliance hoop so you didn’t need motivation – say, only committing to running one mile – you’d be forging a new path of least resistance. That new behaviour would become more accessible than the former, watching television.

Here are a few more examples to think about:

If your default behaviours are decided in advance, a lack of motivation and decision fatigue become the least of your concerns. Remember, when a positive behaviour becomes the path of least resistant, it becomes an easier path to forge in the future. Can you imagine the possibilities?

Here Is Exactly How To Make The Changes You Need, According To Positive Psychology

This Is How You Become Real