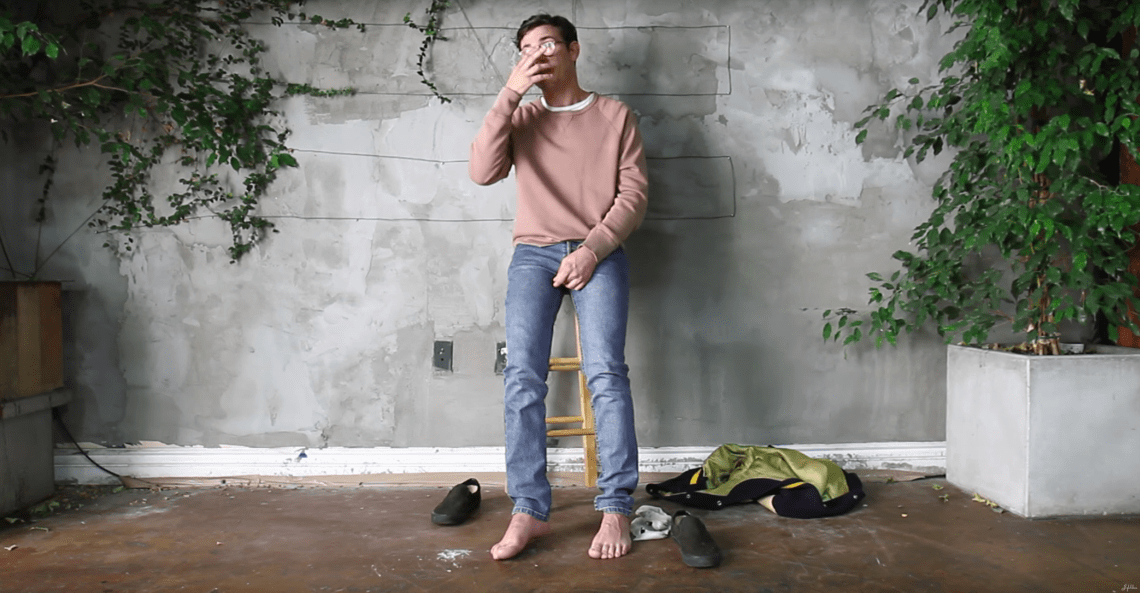 One of life’s cruel injustices is that your mind and body never quite seem to sync up. By that I mean the second your brain starts to get smart your body becomes dumb. I’m 29, which feels like the semi-sweet spot of age. My body is in relatively good shape, no knee problems or herniated discs (although my brother, who is only a year older than me, suffers from both) and I’m very, very slowly figuring out how to live life in a meaningful, productive way. My brain is becoming less of an embarrassing place to be while my body still retains a sliver of fuckability.

But of course, that will surely fade. My body will start to go as my mind becomes stronger and stronger. And you know what? I think it’s bullshit. Out of our lifespan, we only get a handful of years where the mind and body are looking great at the same time?! Rude.

My dad, for example, is a brilliant, brilliant, brilliant man but he’s invisible because he’s old and overweight. He says he feels like a ghost wherever he goes because, after a certain age, people decided he wasn’t worth paying attention to. They’re wrong, of course, but it doesn’t matter. Once you make the choice to erase someone, it’s done.

I have no idea what it feels like to be old and, because of this, I’ve stopped judging people over the age of 65 for anything they do. Parents stay in loveless marriages, they become roommates, they stop going to violent movies because it upsets them and they only want happy endings. They eat too many sweets.

My mom recently quit smoking, which was a process that took almost thirty years. She finally stopped because my brother and I wouldn’t stop harassing her about it and also because technology finally made it easier—at least physically. Since quitting, she’s put on some weight. “I ate a grilled cheese for dinner,” my mom told me the other night. “I never do that!”

“Well,” I suggested. “Maybe you should join a gym? I bet that would make you feel better!”

“No,” my mom snapped back. “Sweets are all I have left. I’m not getting that taken away from me too!”

I understood her point. At a certain age, eating a grilled cheese after 8pm becomes your heroin. It’s the new “fucking a hot stranger” or  “popping molly.”

But doesn’t that fact just devastate you? If a grilled cheese is the highlight of your day, what, pray tell, is the lowlight? Wait. Don’t tell me. Thirty years from now, I want to be surprised.

My parents are at an age where this world is no longer designed for them. Unless it’s an infomercial for menopause, advertisers don’t give a fuck about them. And since they’re retired, the workforce doesn’t pay them any attention. So in a capitalist society, does that mean they’re finally free or does it mean the world is just waiting for them to die?

Let’s talk about youth for a sec. At 20 years old—the beginning of my young ingénue years!—no one had kissed me, sucked my dick, anything, in almost two years. I was so desperate for physical affection, I almost went home with an old man I met at MOMA simply because he asked me to. (Saying no to the things that made me feel funny didn’t really register as an option until my late twenties.) The reasons for my celibacy were complicated but mostly stemmed from being gay and disabled. I have cerebral palsy—a group of disorders that affects the way you talk, move, and think—and my self-esteem resembled that of a plump person sitting next to an Olsen at New York Fashion Week.

I know it’s embarrassing to admit all of this. Like, “Forget about my professional achievements and my cool brain. Just tell me I have a nice ass and that you’d like to come on my face!!!!” But TBH it’s how I feel a lot of the time.

At 27, my life was at a personal low-point. I was thirty pounds overweight and living in a bell jar filled with Speculos cookie butter. Things finally came to a head when I went to visit my grandmother. She hadn’t seen me in months and the first thing she said was “Oh my god!!! Your face is swollen. Are you OKAY?”

“Yes, Grandma. I’m fine. I didn’t realize my face looked weird but, uh, thanks for pointing it out!”

“Well, it does.” She paused and then said matter-of-factly, “It’s probably because you’ve gained weight.”

I stood there frozen for a few seconds before changing the subject. The next day, I joined a gym.

Now, look, it’s difficult to unpack my fitness journey. There are lots of layers to it—it’s a seven-layer dip really—but try to stick with me, alright?

When I first started working out, I was terrible at it. I remember going on an elliptical and having it flash “RESUME WORKOUT” because I was going so slow it thought I had left. But I kept at it, eventually going six days a week, and before I knew it, I was full-blown addicted.

As a writer, I spend a lot of time in my head. I am 99% brain, 1% body. So the idea of spending an hour each day dedicated to something that wasn’t my thoughts, feelings, and emotions was revolutionary. After 27 years of ignoring its phone calls, it felt like I had FINALLY met my body and started taking care of it.

Great, right? Yay! Here’s where the story ends? Not exactly. Getting fit was sort of a double-edged sword. Before going to the gym, I never thought about all the terrible food I ate because ignorance is bliss and so is denial but now I was obsessed with working out and tracking my calorie intake. I lost thirty pounds in five months and I did it by basically being very hungry. If I had a “bad eating” moment, I’d spiral out and feel deeply ashamed. This never happened to me before.  I DID NOT THINK ABOUT FOOD OR MY BODY AT ALL. WHAT. THE. FUCK? It was as if becoming healthy had made me unhealthy in this whole new way.

But one of the major positives of losing the weight is that it made me more confident. For the first time in my life, men checked me out–and not because of my hunchback. I remember the first time it happened. I walked into a coffee shop wearing a tight white t-shirt and blue jeans (channeling my style icon River Phoenix in Stand By Me, natch) and a guy looked up and let out a huge smile. Then, walking past me, he muttered under his breath “So handsome…”

Around the same time, I started hooking up again. It felt amazing to have sex as someone who liked himself and wasn’t just filling someone’s hole to fill the gaping one in their heart. I also started speaking openly about my disability and generally giving a “no fucks” attitude.

Nope. It was all very complicado. Although a big part of me felt super cozy in my own skin, another part of me was still drinking “I Hate Myself” juice. Now that I’d gotten some male attention, it was like a drug and I wanted more of it. The key to that, I thought, was more workouts, more muscle, more eating healthy. In my twisted little brain, I thought that if I worked out enough, my cerebral palsy would just magically disappear and I’d somehow become able-bodied. Because people with broad muscly shoulders don’t have disabilities. People with tight asses can’t be gimps! It’s impossible!

After dating for a few months, I miraculously found a boyfriend and fell in love. He’s someone who accepts me for who I am, scars, limp, and all. So….that fixed everything, right? This MUST be where your body issues ends? (Please God say yes. This shit is getting long.)

Uh, no. Unconditional love barely put a dent in my issues. Learning to love the body you’re in is, spoiler, a super long process, and one that has no clear ending. As a culture, we’re obsessed with happy endings. We LOVE to see someone triumph over adversity and ride off into the sunset while “Everyday Is A Winding Road” blares in the background. But such a blissful scenario rarely exists. There’s constant spillover. Narratives are not clean.

A few weeks ago, I stripped down to my underwear on camera for a website called StyleLikeU and talked about my body. If you’d told me I’d be doing this a year ago, I would’ve thought you’d forgotten who I was a la Julianne Moore in Still Alice and called 911 but here I was. Naked. Imperfect stomach. Scars. And it was empowering, uncomfortable, terrifying, freeing. Basically how it feels to be in my body at any given moment. And I realized that all anyone can hope for is progress. All I can hope for is the celibate boy with the limp one day finding love and feeling secure enough to show off his body for what it is. Even if “what it is” involves sucking in your stomach a teensy bit.

Let’s talk about getting old for a sec. It’s not for sissies, is what my father tells me. He gets pre-cancerous moles burned off every few months. He’s always catching something that could kill him if left untreated. It’s like a full-time job just to stay alive.

My mom, meanwhile, wants new eye cream. If she had the money, she would probably get work done.

Both my parents were in good shape at my age. My dad was an athlete. My mom was stunningly beautiful. Their bodies were accepted by society, reflected back at them on television and being implicitly told that they mattered.