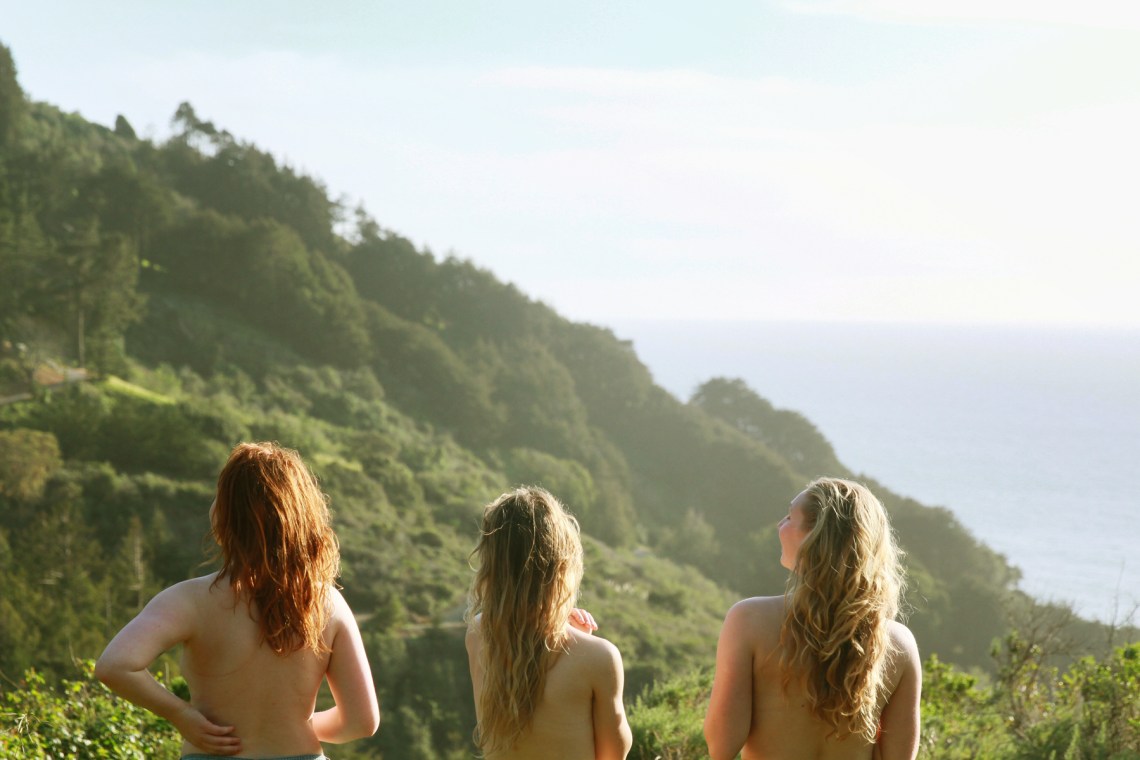 Although there’s a common perception that nudist clubs, beaches, and resorts are freewheeling havens for swingers and voyeurs, public sex is forbidden at nearly all venues that practice public nudity. In the rare case that a man gets an erection, he is usually urged to lie down on his stomach or jump in the pool to encourage “shrinkage.” Since many resorts include naked families, any hint of open sex would bring the authorities cracking down on pedophilia. Many modern nudist resorts run background checks on applicants in order to screen out sex offenders. Besides, any trip to any nudist resort on Earth will quickly reveal that most nudists don’t have very attractive bodies, anyway. (source)

If you believe the biblical narrative, Adam and Eve basked naked in the sunlight until Eve sinned, at which point God told them to put on some clothes, get the hell out of the Garden of Eden, and go get a motel room. (source)

Nudists are known to romp, cavort, frolic, hop, skip, leap, caper, rollick, bounce, dance, and gambol—all while wearing nothing more than the clothes that God gave them at birth.

Famous actors and musicians who’ve openly advocated running around without their clothes include Helen Mirren (“I love being on beaches where everyone is naked”), Uma Thurman, Bruce Willis, Kevin Bacon (“There’s something therapeutic about nudity”), Celine Dion (“I’d like my audience to be naked, too”), Brad Pitt (“I’m naked all the time at home”), Justin Timberlake (“I was born naked and I’m going to die naked”), Matthew McConaughey, Kate Hudson, PJ Harvey, Alanis Morisette, and Christina Aguilera. (source)

The worldwide nudist industry, which encompasses resorts, beaches, and clubs, generates an estimated $400 million annually. This is of course dwarfed (or shrunken?) by a global apparel industry that’s worth over $1 trillion yearly. (source1) (source2)

Although Arkansas is the only state where nudism between both genders is officially illegal (same-sex nudity is OK there), only Iowa and Utah have no places set aside for public nudity. (California and Florida have the most.) In Oregon it’s legal to be fully nude in public unless there’s an “intent to arouse.” Public nudity is banned by law in Iraq, Iran, and Saudi Arabia. Ordinances across this great land infamously criminalize female toplessness while allowing men to bare their disgusting, hairy nips for all to see. Free the nipple, ye Puritans! (source)

I just made up that word—”nubies.” Cute, right? Anyway, if you’re making your first trip to a nudist resort or beach, do NOT stare at other people’s naked bodies and do NOT under any circumstances make comments to them about their naked bodies. In other words, don’t act like a deviant, you perv! (source)

Nudists tout several alleged health benefits of strolling around under the sun without a stitch of clothing on. Among these include lower stress, higher Vitamin D absorption, fertility, and improved circulatory functioning. One female researcher even says that sleeping nude can prevent yeast infections. (source1) (source2)

The modern nudist movement started in Germany in 1903. That’s the year a man named Richard Ungewitter wrote a 104-page booklet called People Naked Again that celebrated public nudity as a source of health and fitness. Inspired by the book, “Free Light Park” was opened in Germany that same year and is considered the world’s first modern nudist camp. Within 20 years, what Germans referred to as “Free Body Culture” had led to an estimated 50,000 German nudists frolicking joyously buck-naked in Deutschland (source)

As opposed to the “nudist” or “naturist”—who only gets naked in the presence of other consenting humans—”streakers” were performance artists/flash mobbers whose purpose was to shock dull, square, clothes-wearing conformists by disrupting public events with a quick, running burst of nudity. Streaking became a huge craze in the early 1970s—the largest “group streak” in history occurred at the University of Georgia in 1974 when 1,543 naked streakers struck together. Perhaps the most famous streaking incident occurred at the Academy Awards in 1974:

Full-frontal cinematic nudity wasn’t legalized in America until 1968. Before then, filmmakers had to carefully avoid showing genitals; they also had to completely refrain from equating nudity with sex. To get around the laws, a whole genre of “Nudie Cutie” films emerged in the late 1950s and early 1960s that depicted life in nudist camps in a faux-documentary style. Classics in this wacky and short-lived genre include The Immoral Mr. Teas (1959), Diary of a Nudist (1961), Goldilocks and the Three Bares (1963), and the eternally weird Nude on the Moon (1962).

Although nudist resorts and beaches are generally more safe than your average urban street corner, being naked sometimes makes one more vulnerable to criminal predators. A nude beach called Sandy Bay in South Africa has seen a string of armed robberies and vicious attacks upon unsuspecting sunbathers. In 2014, a worker on a nudist cruise ship pled guilty to raping a woman and attempting to throw her overboard after she allegedly called him a “son of a bitch.” And a New Mexico nudist couple was sentenced to prison for molesting their own kids.

14. NUDIST CLUBS AND THEIR GOOFY NAMES

As opposed to nudist beaches and resorts, there are many traveling nudist “clubs” whose members gather in one another’s homes or somewhere in nature where they can all strip free of any stitch of clothing. These clubs come with colorful names such as Arizona Wildflowers, Bare Buns Bikers, Black Hills Bares, Diablo Sun Devils Nudist Club, Healthy Hides of Houston, River Dippers, Sno-Bird Travel Club, Sun Lovers Under Gray Skies, and Hippie Hollow Park. (source)

15. A WORLD FULL OF TEXTILES

Just as some gay people malign “breeders” and some people with Asperger’s syndrome speak ill of “neurotypicals,” dedicated nudists use the word “textile” as both a noun and an adjective to describe those silly fools who walk around in manmade costumes that keep their skin from breathing. The nudist lives in a textile world full uptight textile people. (source)

Perhaps the single facet of nudism that gives most people pause is the fact that children are welcome in nudist culture, given the movement’s emphasis that there’s nothing innately sexual about nudism. It’s estimated that “more than half of the nudists in the United States are under the age of 18.” (source)

Although it makes you far more vulnerable to genital injury, nudists engage in all manner of sports. There are tennis tournaments, 5K races, hiking, ping-pong, water skiing, badminton, and even nude yoga. (source)

Where do you keep your iPhone and keys? And how much will sunscreen cost annually?

Less than 10% of Americans sleep in the nude, but about a quarter of Americans have either skinny-dipped or sunbathed nude at some point. (source)

In 2010, 102 Brits rode a roller coaster naked together, setting a world record. (source)

Nudism is understood as a consensual, peaceful, non-predatory activity. This contrasts with “indecent exposure,” which involves people flashing their genitals at the unwilling in public places. (source)

A group called British Naturism is lobbying the government to designate nudists as a minority group that faces potential discrimination against others. (source)

Avid nudists are nearly evangelical in their zeal to spread the word about the glories and virtues of their clothing-free lifestyle. In the process, they’ve coughed up some supremely silly catchphrases such as “Skin does not equal sin,” “I’ve got a brand nude attitude,” “Grin and bare it!,” “Nude is not rude,” “Nude is normal,” and “I give bare hugs.” (source)