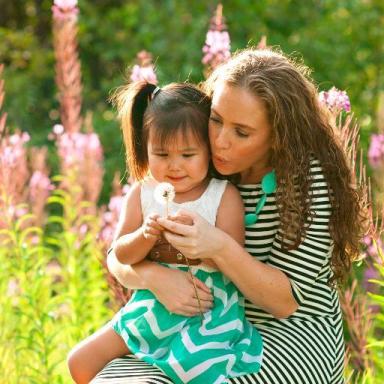 I used to really love sex. Like, there was a point in my life (my early to mid-twenties) when I was pretty convinced regular sex was one of the only good reasons to be in a relationship. It’s never been a secret and my sex drive has never been an issue.

But that was then.

Don’t get me wrong, I still have a high sex drive. But I also have a toddler, and I work from home. I can’t remember the last time I met a man I was even mildly interested in, which is why I somehow went from being a girl who loved sex to one who’s spent the last four years mostly abstinent.

Even just typing that word makes me sad.

I guess life just got in the way of dating. And most of the time, I’m OK with that fact. Adopting my daughter was the best thing to ever happen to me. I’d rather spend Friday nights with her than out at a bar searching for my next boyfriend.

But the length of my dry spell has been the butt of plenty of jokes among my friends. (Because apparently it’s hilarious to make fun of the girl who no longer remembers what a penis looks like.)

The running joke has been my vagina is going to seal up from lack of use. And maybe something about cobwebs, because my friends are assh*les.

Mostly, I brush these jokes off. Or I join in on them, recognizing that the lack of sex (or even just the lack of chemistry) in my life right now is kind of depressing. If I don’t laugh about it, I might cry.

But that’s all it’s been — a joke. Obviously, all the equipment will still work just fine, sans cobwebs, when I meet a man worth jumping into the sack with. Vaginas don’t actually seal shut, right?

That’s what I’ve been telling myself; that this is just a period of my life where I’m focused on other things; that the time will come when I meet someone I really like and can reconnect with that girl I once was; that I will have sex again someday. At least when the toddler is sleeping.

But then I got hired to write some health articles for a website dedicated to menopause. This wasn’t all that atypical a job for me. I’m kind of a layman expert (if there’s such a thing) on women’s health, being mostly self-taught after years spent battling endometriosis. I ghostwrite for quite a few medical websites on various topics related to the vagina. This was just my first foray into menopause.

So, imagine my surprise when I started research for an article on “Vaginal Atrophy.” Never heard of this term? That’s OK, neither had I. But the gist is that when a woman is going through menopause, the lack of estrogen in her body can cause the vaginal tissues to thin out and the vaginal walls to inflame.

Over time, the muscles will actually atrophy and cease working as they should. Continued sexual activity can reduce the decline, keeping those muscles engaged and active. But if you aren’t having sex when this is going on, sex in the future can become very uncomfortable, at best, and nearly impossible in some cases.

I sat at my computer, slack-jawed, reading story after story of women whose vaginas may not have sealed shut exactly, but became basically non-functional due to lack of activity during these low-estrogen periods. Because, that’s right, this doesn’t just happen during menopause— it can also happen while breastfeeding, or during any other point in your life when your estrogen levels or low.

Did I mention that I have endometriosis, an estrogen-dependent disease that has my doctors continually monitoring my hormone levels and trying to keep my estrogen low? Yeah…

I was having a girls’ night with friends a few days after my research, and I brought the topic up, wondering if they’d ever heard of this condition themselves.

“Oh yeah, vaginal atrophy,” one of my friends said. “I have a friend who’s a lesbian who has it. She can’t even get vaginal exams anymore.”

Apparently the vagina is a “use it or lose it” part of the female anatomy. Which, as a single mom who doesn’t have a whole lot of time (or even desire) to be using it right now, is a pretty horrific discovery to make.

All this time, I’ve been telling myself that when she’s older I’ll start dating again. Or when I get my business to the point where I don’t feel like I have to work every single day. Or when life just slows down a little.

But what if that day comes and my vagina really has sealed shut?

I’m not sure how long it takes for this whole atrophy thing to happen, though. I think I’m still good for now. But why aren’t more women talking about this? Why aren’t we made more aware that this is something that can actually happen?

I’m not sure how it changes anything. I mean, even knowing this information, I’m not feeling all that inclined to just jump the next man who shows interest. But if knowledge is power, consider me the woman who’s now spreading the word.

Vaginas actually can seal shut. This is a thing. So know your body, pay attention to the signs (drying up down there can be your first clue), and see a doctor if you’ve got concerns. Because even if you don’t want to use it today, you might still want to someday.

And while cobwebs probably aren’t a real concern, vaginal atrophy just might be.

Leah Campbell is a freelance writer and editor living in Anchorage, AK. A single mother by choice after a ...

I Don’t Want To Disappoint You

I Don’t Know What I Want From This World, But I Know I Want You