In honor of one of the most exciting, action-packed times of the year, GrubHub delved into the tastier side of the tournament to uncover the foods that spike during games. We took a look at GrubHub’s order data to identify some surprising upsets. Here’s a look at the top 10 foods that scored a slam-dunk with tournament fans.

It may not always look pretty, but you can’t deny Tuna Salad’s commitment to its consistency.

This food is often overlooked given its teammates chicken taco and beef taco, which is exactly why shrimp is a major threat in crunch time — when everyone else is covered, shrimp will be wide open in the corner, ready to nail the three.

If you’re matching Peanut Avocado rolls up against, say, perennial powerhouse California rolls, logic says that California should win in a blowout. But logic doesn’t apply here and this vegetarian sushi option wins out!

This actually isn’t that surprising given the amount of times bracket participants change their minds before turning in their picks.

Perhaps you didn’t see this coming, but Tekka Maki is 24% more commonly ordered on game days. Delicious sushi is said to calm the nerves during those particularly close games.

Sesame Noodles, believe it or not, are the de-facto food to order when your bracket’s just been busted. Cold, but comforting. 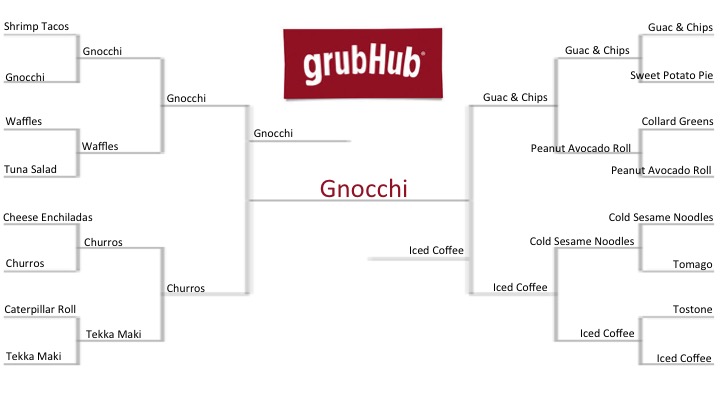 Churros are a pleasant surprise, as they’re the type of snack food you could see making a run in a snack food bracket — they’re hot, they’re energetic, and they’re one of the most vertically-gifted foods out there.

Many fans believe chips and guac are the number one seed of snack foods. They’re powerful, uncompromising, and not exactly shy about their unmatched talent.

Apparently hoops fans need that icy cold energy boost to get through a marathon session of basketball that can take them late into the night.

Gnocchi, somewhat shockingly, tied at the top for food most commonly ordered during the tournament. Some mastermind coaches have been rumored to order large plates of the heavy pasta to be delivered to their opponent just before tipoff.

Gnocchi has been the true Cinderella story here, coming from out of nowhere and being out-ordered even by traditional front-runners like Churros and Guacamole and Chips. Gnocchi may be small and pillowy, but these guys have packed a punch big enough to clinch one of the top spots.

Brought To You By GrubHub