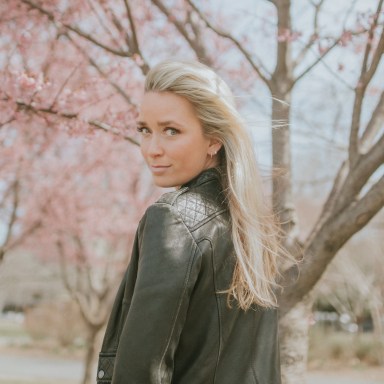 I’ll never forget my first panic attack. It was junior year of college, and I was home for the weekend. I was telling my mom about something that had happened with a now ex-friend. She was a stereotypical “mean girl,” though I couldn’t pinpoint it at the time. As I described the passive aggressive comments, not-so-passive ostracizing and generally unkind things being said behind my back—and how all of this made me feel—I realized I had stopped breathing. My chest was burning. My throat was constricted. My pulse was racing. I thought I was having a heart attack—or worse, actually dying. Not understanding what was happening, I started crying hysterically (Mom, I’ll always be thankful for you helping me out).

Dramatic? Not so much. I wish I could say that was the only time in my life this feeling has taken over my brain and body—but it’s not. Luckily, as I’ve learned to identify and manage the things that cause me mental and physical angst, they’ve become few and far between. But the chance of an episode is always around the corner. And if you don’t know what this is like, here are a few things you should avoid saying.

The difference between someone who is a drama queen and someone who suffers from anxiety is that the former often thrives off of being the center of attention—while the latter can’t stand it.

Oh, but it is. It may be easy to brush off for you, but sometimes, if someone so much as looks at me cross-eyed, I’ll think I’ve done something wrong. Or that they don’t like me. OMG, do they actually hate me?! And then I go over a million reasons for what I could have potentially done to offend them. It’s the nature of how anxiety functions—not a thought process the anxious person actively wishes to engage in.

This is right up there with “relax” as one of the most patronizing things you can say to someone with anxiety. If we could immediately calm down—we would. Thank you and goodnight.

Is it, though? What if it’s not? Then what? Let me preface this by saying that, when said empathetically, the idea behind this statement is, of course, appreciated—that is, trying to be supportive. But it doesn’t make an anxious person feel better because they’re not going to believe you.

I don’t know about you, but I suck at yoga. Really. I’m not good at meditating. One of my friends once attended a class in which the instructor told her to “take deep little big breaths” and then exhale all of her concerns. This is what I think about while I’m trying to get my Namaste on. And then I usually start giggling. Sorry, where was I? Yeah, not so easy to “just let it go” (but I wish it was).

Making someone feel guilty about their thought processes and mental reactions isn’t going to change the fact that these things are there, and they’re real. It’s only going to make them feel bad about themselves and question their own feelings.

7. “Your life looks pretty good—what do you even have to be anxious about?”

You absolutely cannot judge a person’s life by their social media feed—these carefully curated selections of photos more often than not are going to be a highlight reel, not the full picture. For any sunny vacation post, there could be a dark cloud of negative thoughts or worry. You just don’t know.

We still have jobs that require us to show up to the office daily, and social engagements we need to attend. People with anxiety have adapted and learned to put up a good front when necessary. Just because they look happy doesn’t mean they’re not experiencing an internal tug-of-war.

I know I worry. A lot. I wish I didn’t. It’s embarrassing. I feel silly. I want to be more carefree. I put a lot of effort into working on it, every single day.

The best thing you can say is “I’m here for you.” “We are going to get through this.” “You are not alone.”

Author of Evergreen, a poetry collection that explores personal growth through light and darkness.