1. Why don’t clams give to charity?

2.Why are there fish at the bottom of the sea?

Because they dropped out of school.

3. Why did the fisherman suddenly redirect his boat?

Just for the halibut.

4. What does a fish say when he makes a mistake?

It was just a fluke!

5. How did the shark plead in the murder case?

6. What did the carp say to his crush?

Don’t play koi with me!

7. What does a dolphin say when he’s confused?

Can you please be more Pacific?

8. What did the lobsterman say when his crate turned up empty?

It a-piers we have a problem.

9. What did the tuna say to her overzealous partner?

I think we need to scale things back here.

10. What does the fish say when she disagrees with her husband?

I don’t quite sea it that way.

11. What did one tidepool say to the other tidepool?

Show me your mussels!

12. What is the best way to communicate with a fish?

Drop it a line!

13. Why does the mermaid wear seashells?

Because she grew out of her B-shells.

14. Why did the fisherman start doing drugs? 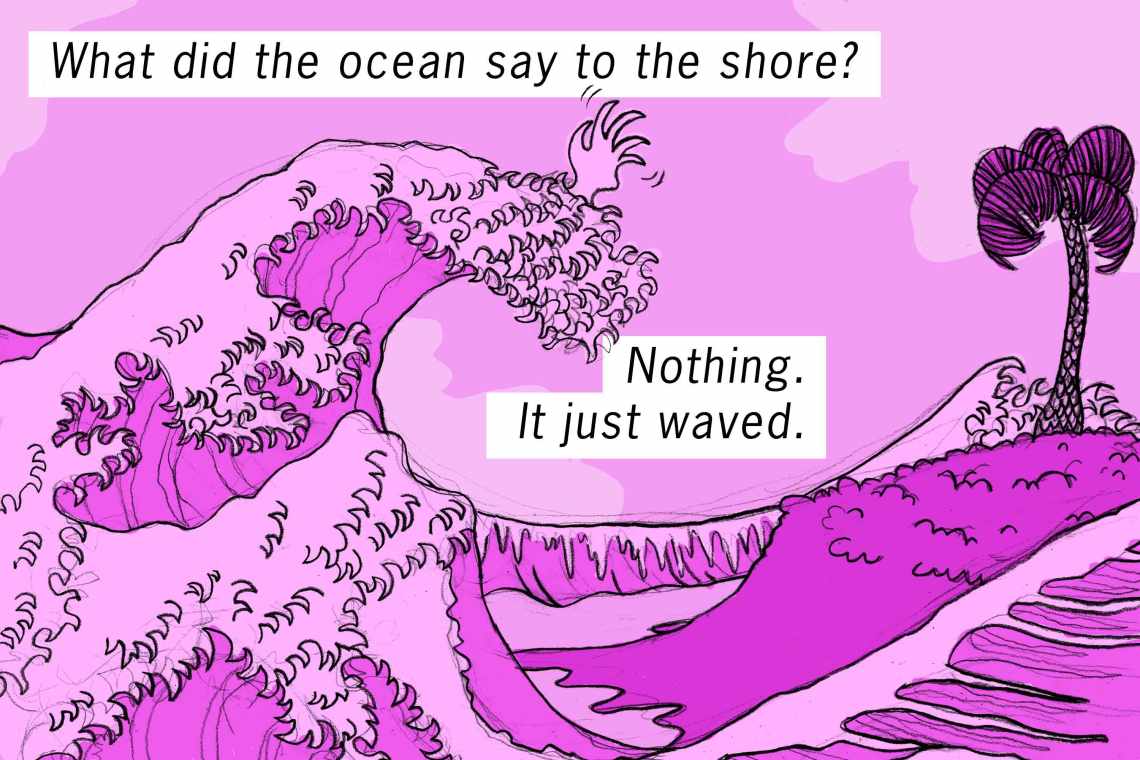 15. Why did the lobster blush?

Because the sea weed.

16. What did the sarcastic otter say?

I think you’ve confused me with someone who builds a dam.

17. Have you heard about the restaurant that caters exclusively to dolphins?

It only has one customer, but at least it serves a porpoise.

18. What does a mermaid wear to math class?

19. Where do shellfish go to borrow money?

21. What did the Ocean say to the shore?

Nothing. It just waved.

22. What is a blue whale’s favourite James Bond Film?

23. Where does seaweed look for a job?

24. What lies at the bottom of the ocean and twitches?

25. What does seaweed say when it’s stuck at the bottom of the sea?

26. Why does it take pirates so long to learn the alphabet?

Because they spend years at C!

27. Why are seabirds so lucky in love?

Because one good tern always deserves another.

Because they had a planktonic relationship

29. What do you call a big fish that makes you an offer you can’t refuse?

30. What do baleen whales call a hook-up?

31. Did you hear about the red ship that collided with the blue ship?

All the sailors were marooned.

32. What did the wise papa fish tell his son?

Keep your friends close and your anemones closer.

33. Where does a killer whale go for braces?

34. Did you hear about the lawyer who tried to sue a shark for biting all his limbs off?

He didn’t have a leg to stand on.

35. Why do freshwater fish cry so much?

They’re just a stream of emotions.

Sink Your Teeth Into These 33 Hysterical Shark Puns

50 Water Puns That Will Have You Swimming In Happy Tears