1. The Real Reason Everyone Gorges On Christmas

While Christmas is mostly celebrated in U.S. popular culture as a consumerist holiday, its origins are actually in self denial. Christmas itself is what is known as a ‘feast day’ which means it’s traditionally preceded by fasting, sometimes as long as 40 days of it, with Christmas being the beginning of three days of celebration and, you guessed it, feasting. There are people all over the world fasting right now.

3. Santa Is Both Different, And The Same, In Every Language

Koreans refer to Santa Claus as Santa Haraboji or ‘Santa Grandfather’ and it’s traditional public holiday there just as it is in the U.S.

4. Where Christmas Trees Come From

Christmas trees are a huge part of season’s tradition and have been since circa the 15th century when Germans first started doing it. However, the practice was preceded by tales of Saint Boniface cutting down the holy trees of pagans (yes, like in Game of Thrones) which they had worshipped for centuries prior at some time in the early 700s. Boniface is said to have cut down a pagan holy tree known as Donar’s Oak and erected an evergreen tree in its stead, stating that it’s triangular shape reminded him of the Holy Trinity and extolling that it’s top seemed to point to heaven. The wood from Donar’s Oak was then said to have been used to build a church.

Evergreen trees (fake ones, at least) are used for Christmas everywhere now, even in Indonesia.

5. Where Christmas Cards Come From

The first commercially sold Christmas card was designed and created by English civil servant Sir Henry Cole and artist John Horsley in 1843 and sold for one shilling per card. The card pictured, among other things, a little boy drinking wine. The practice became extremely popular and not sending them is grounds for shaming by parents and grandparents nationwide (no source required). Now over two billion Christmas cards are sent in the U.S. every year. [Source]

Guess who buys these cards? Not men. Only 15% of men partake in the Christmas card tradition by actually buying them. The rest are purchased by women. [Source]

7. Canadians Claim Santa Claus As Their Own

8. Where Christmas Stockings Come From

The tradition of Christmas stockings comes from a legend about St. Nicholas giving a poor man money so his daughters wouldn’t have to become prostitutes to support themselves. Getting married costs money one father with three beautiful daughters had none. St. Nicholas learned of this and one night he threw three bags of gold into three stockings that had been hung to dry by the fireplace. The daughters were then able to marry and not become prostitutes.

9. Where The First Candy Canes Were Made

On a commercial level, it wasn’t until 1957 that a machine was finally invented that could bend the crook in a candy cane. Everyone had been doing it by hand up until then. [Source]

11. Knitted With Care And Enormous

The largest Christmas stocking ever made was 168 feet long and 70 feet wide in Tuscany, Italy in 2011. It was created to raise money for charity and contained balloons with candy inside. [Source]

The first National Christmas tree was lit by then President Calvin Coolidge in 1923. [Source] 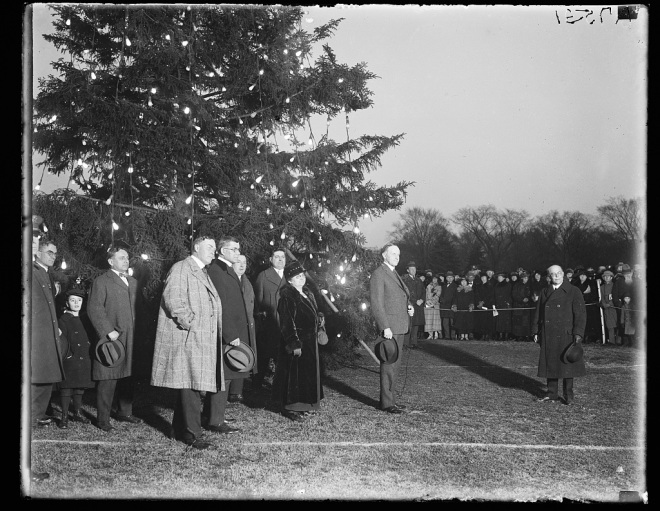 13. Christmas Cards Do A Lot Of Good In The World

Britain raises around $80 million for charity every year from the sale of Christmas cards. [Source]

The world’s largest Christmas tree used to be in Dortmund, Germany in 2012 at 145 feet. This year, the world’s largest Christmas tree is a big more abstract and consists of lights strung in a ‘tree shape’ on the side of a mountain in Italy. The Pope himself threw the switch to turn it on on the 8th. The thing is 2,460 feet high and 1,476 feet wide. That’s nearly a half a mile wide and over a quarter mile wide. [Source]

While much of the rest of the world has Santa Claus, Iceland has ‘The Yule Lads’. Originally portrayed as mischevous (or, alternately, as downright murderous monsters), The Yule Lads have been mostly rehabilitated in the popular culture in modern times but they used to be depicted as the sons of trolls who traveled around scaring children into behaving. There are thirteen of them and they’re accompanied by a Yule Cat who “eats children who don’t receive new clothes for Christmas” which hardly seems fair. Here’s a list of all the Yule Lads, what they do, and when.

They’re all kind of jerks.

16. And Many Older Legends Have Been Retconned To Fit Christmas

No list about Christmas traditions and legends would be complete without the inclusion of the Tomte, a creature of pre-Christian lore who’s since been adapted.

Originally, in Scandinavian folklore, a Tomte was the spirit of the person who had cleared land for a farm and while it was a benevolent spirit, it was considered the spirit of an actual person but didn’t take physical form.

However, after Christianity arrived, the Tomte changed into a physical creature who guards the farm. They are small, no more than three feet tall, only four fingers, eyes that glow like a cat’s at night, and they look like little old men with beards and pointed red hats. They’re also immensely strong. In the U.S., the Tomte became what we know as gnomes. The garden gnomes you’ve seen are all based on the Tomte.

Despite being a benevolent spirit, Tomte’s get mad if you don’t give them food. They also hate swearing, farmers peeing in the barn, and bad treatment of animals. [Source]

50 Stories About Christmas Presents That Will Make You Ugly Cry