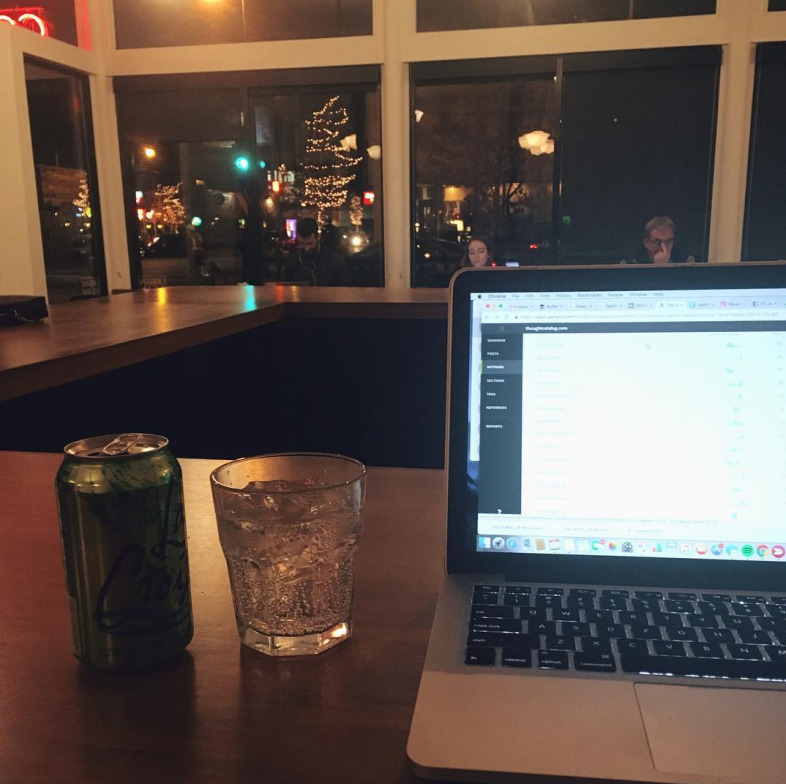 I write little letters instead of sending holiday cards mostly because I don’t have a cute dog and I’m single and I think it would be weird to drop an irl selfie in the mail. I’m going to leave our dear founder’s Google results alone and not mention him here by name but I remember signing his letter this year and I dashed off “thanks for being my champion + patron + bro.” I didn’t think about it while I was writing it but I’ve came back to it and let it sink in how important and rare each of those things are. I’m free to do good creative work because I am believed in and provided for and listened to. If you want someone to grow into the person they are supposed to be, all of these things are essential. As a person who probably cares most deeply in life about this specific venture, there’s no shortage of gratitude.

Kendra Syrdal is my family in one way or another. We’re similar but not the same. We have the same values, but we challenge each other in execution (which is how you know you’re meant to know someone). I always know a creative person is “for me” when they don’t believe in writer’s block. It’s a litmus test for people I know aren’t going to bullshit me. That’s what I require of people in my tribe, to know that if I need them, they are adept and will run shit and I’d never have to worry at all. Kendra is also a blog mom who cares so much for her people it’s actually insane. You could fuel a small town on the electricity of her protectiveness. Also, if I fail as a writer I’m going to produce nightmarishly captivating reality TV shows and I will poach her from TC so we can be Quinn and Rachel from Unreal.

The year after I met Mélanie Berliet I put her at the top of my Thanksgiving list of things I was grateful for. It was an experience that aligned me with the person I’m supposed to be. I’m thankful for Melanie’s existence because she makes me feel normal — not in comparison, but because of the understanding that you can be weird and own it so casually and completely. If I could write Mélanie’s Twitter bio for her I would say “The kind of person who gifts her coworkers weed lube. Adds negative chaos to all work trips/vacations.”

Heidi Priebe does an almost impossible thing where she has an extremely marketable brand while being totally true to herself which makes me very jealous because almost every other creator on the entire planet has to pick between those two things. I actually have zero doubt that Heidi is going to write NYT best-sellers in the psychology space and that they are going to be so different and uplifting because she writes them with empathy and a grounded kind of positivity and in a way that is accessible to everyone.

Ari Eastman is a prolific and talented poet and embodies all of those things you think a poet should be: she’s beautiful and fierce and mesmerizing in the depth you can sense is there. You’re a kid sitting on a counter and you see and adult shut and lock a door and you know there is a world behind it that you want to see one day. Somewhere inside her, there is Narnia. There are decades to come here, to build up on what is already good. I think this is a name I will be excited to talk about working with one day, the way people talk about who they knew in New York in the 70’s. I read Bloodline in one sitting and you should too.

Bianca Sparacino makes everything look easy, and happy. It’s not intuitive, but watching her makes me believe in myself more. By just existing she can push you to be a better writer and a more curious creative. I want to inhabit the wholeness of ‘chrissy’ the way she is so fundamentally ‘bianca’.

Jacob Geers wrote Being Christian is Gay is everything and if it had come out 10 years ago I would have bought it for everyone I knew. All I want is more voices like this telling the kind of personal stories that change people.

Rania Naim is a little bit magic because she showed up here one day and started writing essays and all of a sudden our whole reputation of being a list-driven site was gone because she’d ushered in this whole era of emotional essay writing. There was one month when our 8 most read articles weren’t lists (rare for the internet) but positive (even rarer for the internet), vulnerable (do I have to go on?), honest pieces. This is how you know someone is supposed to do something. They show up and they do something that shouldn’t work and people flock to them anyway. It’s real. There’s going to be an era where no one is talking about Elizabeth Gilbert and Cheryl Strayed because everyone is talking about Rania Naim.

Marisa Donnelly has a soft heart. Marisa will do the right thing in a given situation, she exudes this integrity. If I knew who the best-selling female Christian inspirational writer was right now, I’d tell you confidently that she’s going to lose her spot to Marisa one day.

Kim Quindlen is the funniest writer we’ve ever had at TC. She’s so nice and not histrionic that you don’t expect her to actually be really talented at humor, which makes it that much more gratifying to laugh.

Nicole Tarkoff is incredibly sweet and someone you know is meant to create something every day in one medium or another. She’s the daughter of an artist (you can tell) and if I were here I wouldn’t be half as humble as she is.

Katie Mather is the little sister who became so much cooler than you it’s not fair. She owns her weirdness and originates her own styles of writing (v rare). She wrote this list of generic boy names and why they are bad. It’s actually amazing.

Lauren Jarvis-Gibson who is incredibly kind and incredibly positive and Becca Martin who is totally fearless joined our staff this year and are both fundamentally hard-workers who ‘get’ the internet and how readers work — which are very rare qualities to find. I like being here at the beginning with them and watching them push themselves every day. It makes me super happy to see when their writing takes off, because I know it’s the result of focused effort.

And Jim and Dan our archivists and collectors, our Dev team and Sommer and Noelle who keep the lights on in a company full of people who definitely would not figure out how to keep the lights on on their own, Alex and Robbie and our sales team who are our literal patrons — you create a space for writers that is purely magic.

There’s a poem I love about how occasionally (just occasionally) things actually do work out. Sheenagh Pugh’s Sometimes:

Sometimes a man aims high, and all goes well… Some men become what they were born for.

Everyone, thank you for making me believe that this life is full of wonder and good things and people who become what they are meant to become.