I am the last person you’re going to see going on about how “creepy” guys are on Tinder. I try really hard to treat people with respect even when I’m not interested or they’re behaving weirdly. But if we’re going to continue with this illusion that women are the emotional sex while men are rational I’m going to need to submit some evidence to the contrary.

Behold, this man’s extreme reaction after I fell asleep in the middle of a casual conversation we were having late at night: 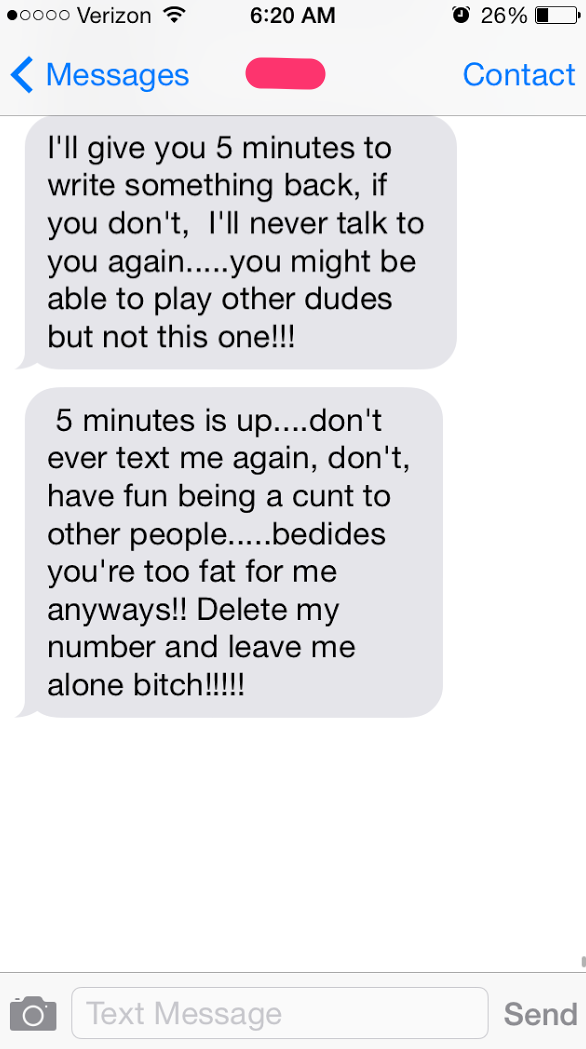 Background: we’ve been texting since last Friday and have gotten along really well. We’ve been planning to get coffee or something this week and see how that goes. Late last night (11pm) we talked more about it and he invited me over. I declined because I had already taken a melatonin and wouldn’t let myself go straight to the home of someone I didn’t know anyway, even if it sounded fun.

If I was reading this I would think, there’s got to be more to the story, but there really isn’t. We’d only had pleasant exchanges. I said it was too late to come over and didn’t think much of it, assuming he’d understand that it was late and we’d figure out a time that worked better. Then I woke up to a few messages about how I was inconsiderate, ending with these two (I isolated them because, identifying information).

I don’t think I’ve ever been as angry as this guy sounds in my life. If I was, it probably wouldn’t be a person I barely knew taking too long to respond to an unimportant text.

I have good intuition. Like REALLY good. People compliment me on it. That’s why I’m so disturbed by this guy’s sudden transition from normal to Very Angry. He seemed so nice. He called himself nice. He called himself a hopeless romantic. So why do I feel like if he had my address I’d be hearing him pound on the door right about now?

I guess I don’t know how to pick them.

For a less #dark way to get creeped out, follow Creepy Catalog here.

Read this: How To Be The Kind Of Guy Women Love Having Sex With
Read this: 15 Ways You Know You’re (Finally) Dating A Gentleman
Read this: 11 Rules For Finding Love On Tinder
Read this: 25 Men Answer “What’s The Difference Between A Girl You Date And A Girl You Just Hook Up With?”
Read this: 24 Dudes Share The Red Flags They Use To Identify “Crazy” Girls
Love & Sex Tinder