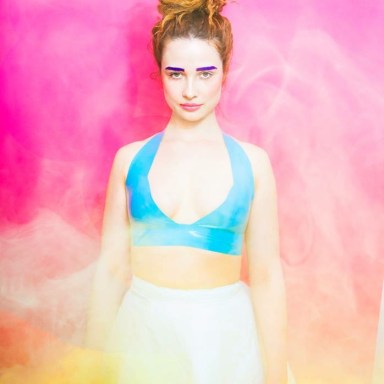 By Zoë Ligon Updated November 1, 2018
Charles Deluvio
There are better ways to insult someone rather than calling them a “pussy”.

I love a good, trashy one-word insult as much as the next person.

But sometimes, it reaches a point where the line between an intended generic insult actually carries undertones of sexism and a preservation of negative gender norms (not unlike catcalling), and I find myself cringing at how diminishing these words are when there are so, so many other options for a raunchy insult.

If you hear someone say “you’re being a pussy” or something similar to that, what is your interpretation of that phrase?

Pussy is used as a synonym for “weak,” someone who isn’t a daredevil, someone who is too shy to do something, someone who is all over failing to meet an expectation that the person uttering the word has set for them. It’s also a word I use in an endearing way to refer to my own genitals, and gee, it’s kind of upsetting to hear a word for my favorite body part used so negatively.

The fact of the matter is that “pussy” as an insult is derived from “pussy” as a word for a vulva and not the other way around.

I could go on a very long rant about how this is another prime example of female attribute being subordinate and powerless, but I’ll just sum that up by simply acknowledging it. Although there are different meanings for these words, I’d like to add that it isn’t acceptable to use “cunt” or “vaj” either.

If someone says “you’re being such a dick,” what is the perceived meaning?

A “dick,” is rambunctious, maybe carelessly selfish, a “dick” might “dick you over,” a “dick” is more aggressive and actively a jerk compared to the passive “pussy.” “Dick” is also a really hot word that I use to endearingly refer to penises, and it’s also such a nice touch in anyone’s dirty talk catalog.

Do you see what I’m getting at here? Why do we use the name of a penis, one of the most widely used images of power, to degrade someone and connote negative elements of power? I thought we were all about the phallus here in the 21st century, no?

Now, I imagine you might be sitting there thinking to yourself, “Geez, I can’t use racial slurs. I can’t use the R-word. I can’t say the T-word. My vocabulary is becoming so limited now, and I don’t like that one bit! How will I express myself?”

Let me count the ways.

We all have assholes. Now, this isn’t my first choice for an insult, because assholes can totally be a temple of pleasure, but there are absolutely no gender-related insults happening with this gem.

2. “Douche” is a fantastic insult.

It might make you sound like a midwestern mom or dad, but it’s punchy, am I right?

Again, we all poop! I don’t want you all to get the wrong idea. This isn’t a poop-shaming article, but I am trying to move the insults away from gendered genitals specifically.

Well, there you have it. A call to end the usage of “pussy” and “dick” as insults, with a few fun recommendations for the next bag of turds you encounter in your life.

Folks, none of us are 100% politically correct, and I, too, have these words ingrained in my vocabulary as mean things to say, but take a moment to become aware of the implications of the things you say.

Read this: I Just Said What Every Other Woman Is Thinking
Read this: 11 Men Explain What Wife Material Means To Them
Read this: 6 Ways To Be A Feminist Girlfriend
Read this: The War On Men: One Feminist’s Unlikely Stance

Zoë Ligon is a sex educator, artist, and writer. She is currently in the process of opening Spectrum Pleasure, her very own sex toy boutique, in the Detroit area. Follow her on Instagram and Tumblr

How To Enjoy Life: 10 Ways To Stop Running After Happiness And Finally Find What Feels Good Now