My mother lived in a three bedroom farmhouse just outside of St. Anthony, Indiana. A quick hike across a field and through the woods would put me at the Forest Park Elementary playground. My nights were spent indoors watching movies and my days were spent playing with a neighbor girl named Nichole. She was a year older than me. She was a tomboy who played with firecrackers and kept a slingshot in her back pocket. I didn’t really know what it was to be attracted to someone back then, but she was my first crush.

When I was in fourth grade, I read Bridge to Terabithia as part of the accelerated reading program. The whole time I read the book, I pictured the time I spent with Nichole in that small patch of woods. It was also around that time that I first noticed my feelings for Nichole. It didn’t change anything, but I found myself looking at her for longer periods of time. It was weird.

She had hiked through the woods to the playground one day when we encountered a new kid on the merry-go-round. He introduced himself as Harry Clem. Nichole went to shake his hand and he ran past her to the slide. He looked like he could have been my age, but it was hard to tell. Nichole and I played on the swings as he threw rocks at the windows of the elementary school. I didn’t want to get in trouble and Nichole must’ve felt the same way because she stood up and yelled at him.

Harry turned around and said, “You wanna make me? What about your boyfriend?”

Nichole responded, “My boyfriend would destroy you.”

My heart fluttered at hearing her refer to me as her boyfriend. Pumped up with confidence and feeling tough, I walked toward Harry Clem intent on beating the snot out of him.

He put his arms out and leaned his head forward. “Do something punk!”

I took a swing and it landed square on his jaw. He went down into the mulch and I kicked him in the ribs. He came up with a blow to my gut and it knocked the wind out of me. I doubled over in pain and he proceeded to beat me senseless. I don’t know how long the fight lasted, but in the end, Nichole hit him with a stick and chased him off. Battered and bloody, I sat on the end of the slide as Nichole tended to my wounds as best she could. She walked me back to my mother’s house and kissed me on the cheek.

“That was really sweet. See you tomorrow.”

My mother was infuriated that I got beat up. She asked what happened. Still riding the high of my first kiss and the notion of having a girlfriend, I quoted a movie I’d seen a few weeks prior and said, “You should see the other kid.”

My step-father laughed and slapped his huge hand on the back of my shoulder. “You’re a man now. I’m proud of you boy,” he said.

I spent the rest of the night with an ice pack on my face and stayed up until midnight watching movies with the adults. Up until that point, it was probably the best night of my life. I went to bed feeling like a hero and looking forward to a day in the woods with Nichole.

Morning came and I went to the edge of the driveway to meet with Nichole. Instead, I was met by Lois, Nichole’s mother.

“Harry Clem’s mother called me last night saying you and Nichole beat him up. She’s grounded. I don’t want to see you around my daughter,” Lois scolded, wagging her finger at me.

About a month passed before I saw Nichole again. I was playing in the creek by myself when she sneaked up behind me and pushed me in the water. I was startled, but quickly turned around to splash her. As we splashed each other in the shallow water, I saw Harry Clem walk up to the creek bank. I shouted up to him, “What you want tattle-tale?”

Harry grinned. “Sorry about that, he said. “I was sure you were gonna run back to your parents, so I told on you first so I wouldn’t get in trouble. Come to find out you didn’t tell on me…” He looked down at his feet. “You’re a cool kid,” he added.

I stood up in the knee-deep water and said, “Yeah, well you’re a shithead.” I balled up my fist in case he wanted to fight.

Nichole gasped at my use of a cuss word. Harry kept smiling. “Whatever. You wanna see something cool?” he asked.

I was about ready to pull him in the water and drown him, but Nichole spoke up first. “What do you have in mind?”

Harry kept grinning. The freckles on his pale cheeks scrunched up to his beady green eyes. “I was thinking we could head up to the Schlessinger Farm,” he said.

I snorted. “Schlessinger Farm? You mean that dump my grandpa owns? He’s gonna tear it down in the summer,” I said.

Nichole looked at me with a fearful expression. “Seamus,” she whispered. “You don’t wanna go there. Bad stuff happens to kids who go there.”

I put a hand on Nichole’s shoulder. “It’ll be fine,” I said. “My grandpa takes me fishing up there all the time.”

“That’s the pond,” Nichole countered. “The house is different. My friend Alice went in there and no one ever saw her again.”

Nichole walked up and punched Harry in the arm. He shouted in pain.

“Ow. What the hell?” he asked, massaging his arm.

Nichole looked at me and said, “Come on. Let’s go to the farm. Maybe we’ll get lucky and the old crone will eat Harry.”

I waded back up to the bank and followed Harry and Nichole through the woods.

We had been walking for a couple of hours when I stopped at a log to rest. Nichole sat next to me and produced a bag of sunflower seeds from her pocket. She poured a few into my hand and we ate them one by one as we watched Harry poke into another dead log for grubs. He flicked them on the ground and stomped on the white bugs shouting, “Fatality!”

The sun was low in the sky when we hit a clearing. Off in the distance, I could see a dilapidated old farmhouse I’d driven past more than once with my grandpa when we’d go fishing at the pond up on the hill. I half expected to see his truck up there, but it wasn’t. Harry walked up to the well and cranked the pump a few times. Water came gushing out and we all took turns leaning our heads down for a cold drink. 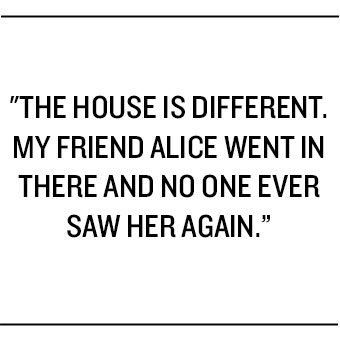 I turned to Nichole and said, “We shouldn’t stay too long. If we’re not back by eight my mom is gonna get real mad.”

Harry punched me in the arm. “Chickening out?” he challenged.

I grabbed my sore arm and said, “I’m not a chicken.”

Nichole looked up at the sky and pointed at the setting sun. “It’s getting dark. We should go.”

Wanting to impress Nichole and intent on making making Harry look stupid, I strolled up to the front door and jiggled the rusty doorknob. It eventually twisted to the left and I pushed open the door to reveal a dimly lit living room with musty old furniture. Black and white photographs sat on the mantle in dusty frames. I saw an old book on the coffee table and sat down on the musty old sofa to read it.

Harry strolled in quietly after me. I looked at him triumphantly. “You got any matches?” I asked.

He laughed and said, “No, but I have this.” Harry produced a black Zippo lighter with a Harley-Davidson logo from his pocket and flicked it to produce a flame. “I Nicked it from my dad.”

I pointed to a couple of candles on the mantle and he walked over and lit them. Nichole sat next to me on the couch and I grabbed the old book from the table. It was a handwritten journal. Harry stomped through the house knocking over chairs and throwing plates in the kitchen.

I thumbed through the yellowed pages of the journal for a few minutes before I came up on a passage that stood out to me.

“Found blight on the corn. At first I thought it was just a few stalks, but as I moved through the rows, I found it had infected the whole field. We were barely able to make ends meet with the last harvest. Edna keeps talking about moving to Jasper and getting a job. She even talked to Basil Bromm about selling the land. He made a good offer, but I won’t sell this land. My father and his father tilled this land. I’ll be damned if I sell it to that bastard.”

I turned to Nichole and showed her the journal. While she read the passage, I said, “Look, it mentions my grandpa!”

Nichole eyed me. “You really don’t know the story of this place do ya?” she asked.

I shook my head. “No,” I said. “Grandpa said he bought the place at auction.” I turned the page and saw a few more lines about corn harvests and a tight budget before noticing several pages had been torn from the journal. I didn’t even notice how dark it became outside. The candles on the mantle had burnt about halfway down. By this point, Nichole was holding my arm tightly and in that brief moment, I realized we were snuggling on the couch. I put my arm around her and leaned in for a kiss. She looked at me with her doe eyes and we awkwardly pressed our lips together. Our first kiss slowly transitioned to using our tongues. I should have been freaked out by how creepy the place was at night, but for the first time in my life, I was making it to second base with the girl of my dreams.

This amazing sequence of events came to a head when we heard Harry scream from the basement.

I shot up to my feet and Nichole looked up at me and shouted, “We need to go, now!”

I looked at her and out into the dark interior of the house. “He’s a shithead, but we need to make sure he’s okay.”