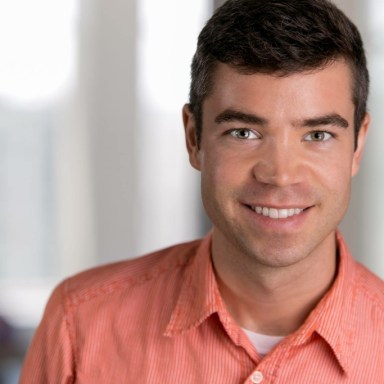 My sex life is nothing to brag about. Although I do have some good stories about a Turkish Airlines flight attendant whose name means “dolphin” and a guy who literally ran out of my house pre-hookup, my sexy times aren’t great. Like any good Midwestern boy, I pledged my virginity to God until I started dating a dude. Since then, I’ve had some short-term relationships but mostly one-time things that happen after nights out.

I never really thought too much about contracting something from my limited sexual encounters. I always used protection and went to school in a college town in Oklahoma. There are a fair amount of gay guys in Norman, but the group is quite incestuous so if you’ve slept with one person, you’ve indirectly slept with everyone. Of course, STDs and HIV exist even there, but I thought that my standards would help me avoid ever contracting one of those diseases/viruses/skin conditions. I didn’t meet up with people from Grindr or Craigslist. I wasn’t sick. I didn’t have pus coming out of my penis. So, I thought that I was, without a doubt, clean.

After graduating, I moved to Washington, DC and thought things were going to look up for my sex life. DC is one of the most gay friendly and LGBTQ-inclusive cities in the U.S. However, it also has epidemic levels of HIV. Despite my still limited sexual relationships, I began to become paranoid that it was inevitable that I too would become infected with HIV.

It seemed like an omen that after my first few months in DC, I started noticing sign after sign for either HIV testing or living with HIV. One of my first sexual experiences in DC was particularly bothering me. I could brush my paranoia aside for a while but I finally reached a point where I couldn’t take it anymore.

I had to know.

With trembling hands, I went to the local community health clinic after work one day, sweating bullets.

What if I was HIV positive?
Could it really happen to me?

While waiting, I saw other gay guys checking apps on their phones. I don’t use those, so I should be fine, right?  The result from the rapid HIV test was negative that night, so I breathed a huge sigh of relief and patted myself on the back. Then the nurse told me that there is a window period of 1-3 months where HIV antibodies develop. Wait…what?

For two more months, I forced myself to live in sexual purgatory as I was not convinced that I was HIV negative. I would sit at work and look up all of the symptoms of HIV: flu-like sickness, rash on the chest or back, night sweats, mouth sores, weight loss. Then I would go home and convince myself that I had these symptoms.

So, I would get tested again. And again. I got tested for HIV EIGHT times in four months. I went to two clinics twice, bought two home testing kits from CVS (took one in the bathroom at work), and got tested by my doctor twice.

I was obsessed. Thankfully, all eight tests came back negative for HIV, and I’m well outside of the three-month window since the last time I had sex.

My extensive research has taught me that HIV and STDs are scary things that I do not wish to ever have to deal with, either physically or emotionally. I’m pretty sure that I’ve traumatized myself just by thinking that I have something, so I cannot imagine what it would be like for that to be a reality. But for a substantial amount of people, it is.

This little scare episode led me to learn a lot about these health conditions as well as to accept that an STD or HIV is not the end of the world. HIV affects men seeking men disproportionately more than heterosexual men and women, so it is a real concern, especially in a large, gay-friendly city like Washington, DC. But, along with all of these statistics that I can now spout out in my sleep, I’ve learned that tolerance is just as necessary as education and prevention.

HIV-positive people are now able to live with the virus without it affecting much of their daily lives. So, along with education about HIV, we must also educate ourselves on accepting and respecting people living with HIV and try to lose the social stigma associated with them.