As I watched a blue cross dare to emerge on the second stick I peed on within ten minutes, I grew more and more aggravated. It was July 16th, 2014, six days after I was supposed to get my period.

“I’m fucking pregnant!!!” I screamed with more than a hint of accusation towards my boyfriend, who was waiting patiently for my signal in the next room. Then I slammed the bathroom door shut and sat back down on the toilet.

I was mad at my boyfriend for impregnating me, mad at the injustice of being born a woman, and mad at my reproductive organs for doing exactly what they were designed to do. Mostly, however, I was mad at myself for trusting in the pull-out method for five straight years. 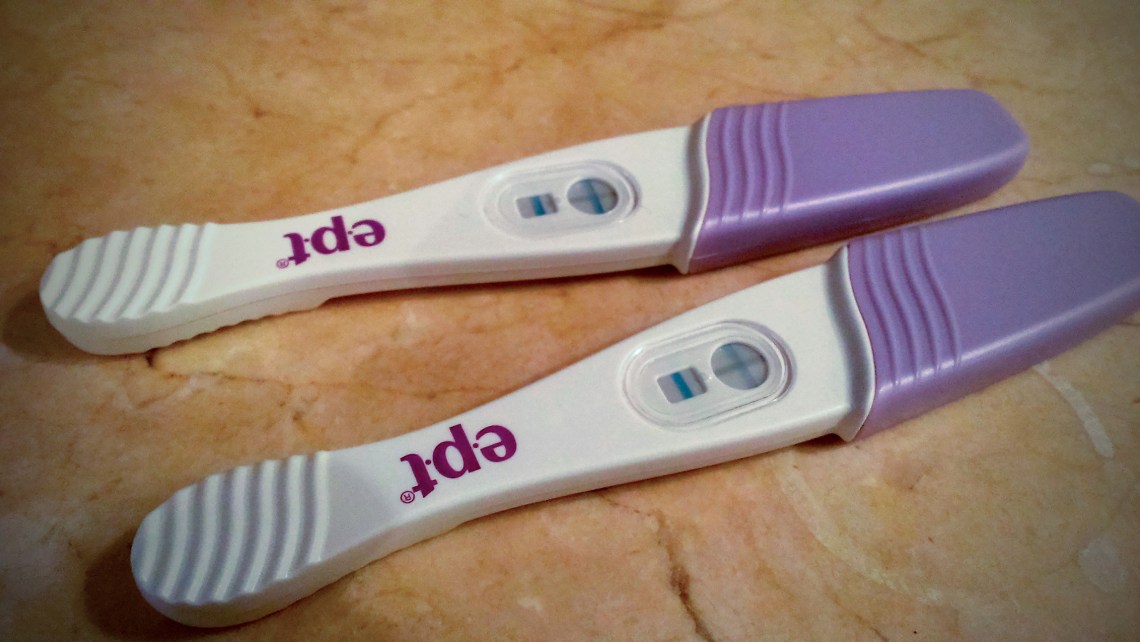 Staring at my reflection in the medicine cabinet mirror, I recalled the disapproval on my gynecologist’s face as she asked me about birth control during my previous annual exam.

“The only thing your boyfriend should be pulling out of regularly is a parking space,” she’d said.

“Okay, then. Let’s just say he withdraws,” I’d replied, a little too cheekily.

Deaf to reason, I politely declined a prescription for the pill yet again.

Although I wasn’t sexually active until age 19, I started taking oral contraceptives at 16, shortly after I began menstruating. Back then, it was cool to be “on the pill.” I wanted to tuck that circular nude plastic case with the rotating knob inside my backpack, and whine about how hard it was to remember to pop that little pill every single day at the exact same time. So I hit up my gyno for a prescription, casually citing an irregular cycle and cramps I’d never really had.

At 27, suddenly uncomfortable with the fact that I’d been popping a daily dose of hormones for over a decade, I decided to stop taking the pill altogether.

It took six months for my sex drive to skyrocket.

I was hooking up with an impossibly attractive, charismatic guy (the one who would later become my life partner) on a lawn chair late one summer night when I realized how much more I had come to enjoy sex over the last few months—even the random, no-strings-attached kind. It was as if I’d reclaimed some critical piece of my identity that had been buried way too long, and I attributed this sudden awakening to my personal birth control ban.

Unwilling to ditch my inner nymph once we were acquainted, I swore off the pill for good. I made this decision singlehandedly—without consulting a medical professional, or considering that something else might account for my enhanced sexuality, such as age, or the fact that I’d just abandoned a stressful Wall Street career that depressed the fuck out of me.

There were always condoms, I figured.

I relied on good old-fashioned penis sheaths for several years, always armed with my own supply in case a dude pulled that lame “I don’t have any” line.

Until, of course, I got pregnant.

Still isolated in the bathroom, I placed both hands on my lower abdomen. Looking down, I considered the little fucker of a fertilized egg inside my uterus—a true one-percenter. Also proof that I’d been a glib idiot.

With a sigh of disbelief, I stood, “positive” sticks in hand. It was time to face reality, and my sperminator of a boyfriend.

“Let’s talk about this,” my boyfriend urged, radiating kindness and concern. In response to my silence: “We want a baby one day anyway…Maybe this isn’t such a bad thing…”

A reasonable statement, given the facts. At 32, I was smack in the middle of my prime childbearing years. I was in a healthy, long-term relationship with the man I’d long considered the Love Of My Life and The Future Father Of My Children. As a couple, we were financially stable, with a wide network of supportive friends and family members living within last-minute babysitting range. We had the means and the desire to raise a child together.

“I’m getting an abortion,” I blurted. “That’s my decision.”

Then I marched right out the front door, aching for alone time.

On a bench outside our apartment building, I thought about the abortion I knew I had to get. I had several deadlines looming and a photo shoot planned for later that day. I felt fortunate to live in New York, where women’s reproductive rights are protected more steadfastly than in other states. Still, it seemed so damn inconvenient, not to mention terrifying, to undergo a surgical procedure. I’m squeamish by nature, and I had no idea what an abortion actually entailed.

I also must admit that I didn’t want to be a woman “who’s had an abortion.” As a longtime supporter of the pro-choice movement, my aversion to this hypothetical label didn’t make much sense. And yet, it did. As certain as I was in my mind and heart that abortion was the right choice for me, I must have internalized some of the poisonous stigma out there. That would have to change, effective immediately.

Could my boyfriend and I have been more careful? Absolutely! But it was my unequivocal right to terminate this unplanned pregnancy.

I headed back upstairs to apologize to my well-meaning boyfriend so we could tackle the situation together, without any shame whatsoever.

Before I could utter the word “sorry,” he was holding me tight.

In the time I’d been gone, he had made several calls and done extensive research. He briefed me on my options: taking a pill and bleeding out at home, or “aspiration,” which sounded a lot like high-powered uterine vacuuming.

“I want this done as soon as possible, and I want to be out cold for it,” I said.

“We can get you in tomorrow morning,” my boyfriend replied, rubbing my back.

Twenty-four hours later, I was seated in a waiting room with three other young women, all of us dressed in medical gowns and booties—and starving. If you elect for full anesthesia during aspiration, you have to fast for at least twelve hours in advance to avoid choking on your own vomit during the procedure. 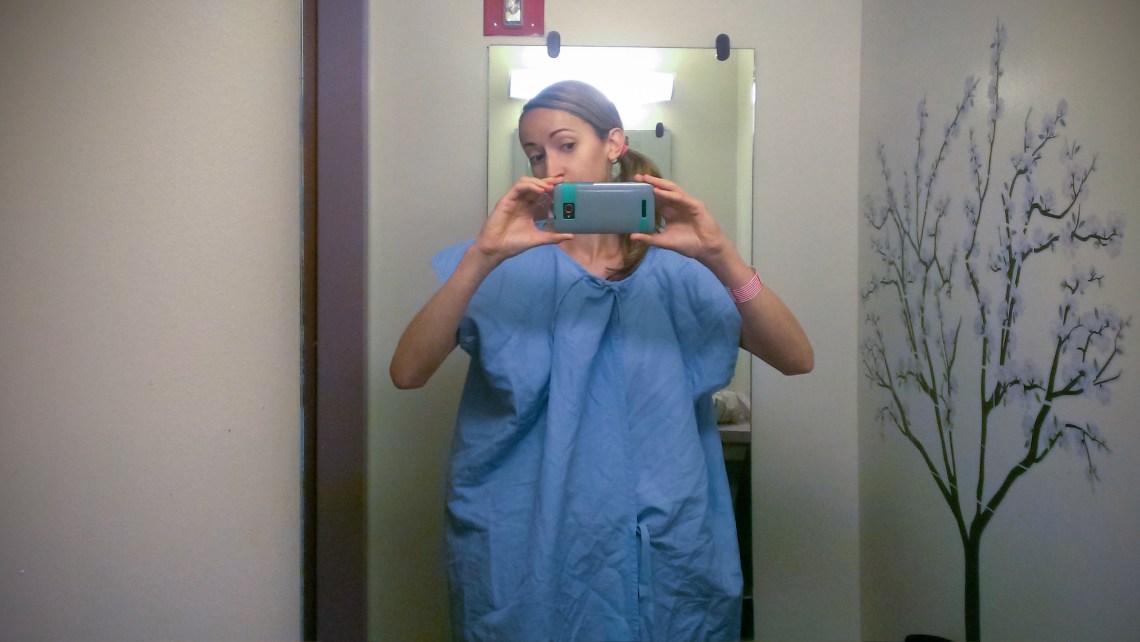 After joking that I’d considered postponing my appointment just so I could eat breakfast that morning, I bonded with my peers. Of the group, I was the only one without at least one child to care for already. I was also the only one whose “pregnancy sack” was too minuscule to spot on a regular ultrasound. And the only one who’d told the nurse, somewhat regrettably, that she was “such a baby” about needles.

But our similarities are what stood out. We were all relaxed, and glad to be moments away from getting the medical attention we needed so we could move on with our lives as usual.

Soon enough, an amiable aid ushered me into the operating room and an anesthesiologist sedated me so the doctor could clear my womb of its unwanted contents. The entire procedure took all of three minutes.

I woke up in a chair alongside a few other women, wearing paper panties lined with a pad in case of spotting. Though zonked from the anesthetic, I was astute enough to feel intense relief. And gratitude.

Over the next 48 hours, my boyfriend catered to my every need while I recuperated.

“What should I tell Gary about this weekend?” he asked, understanding that I wasn’t in any shape to spend time at our friend’s beach house as we’d planned.

“Tell him I got an abortion,” I said.

Maybe there is no “right time” to get pregnant, but in my case, I knew there’d be a time more right than July of 2014.

And guess what? That more-right time arrived in the fall of 2016, when we decided, very mindfully, to start trying. Today, I am nearly 18 weeks pregnant, and I couldn’t be more psyched about becoming a mom.