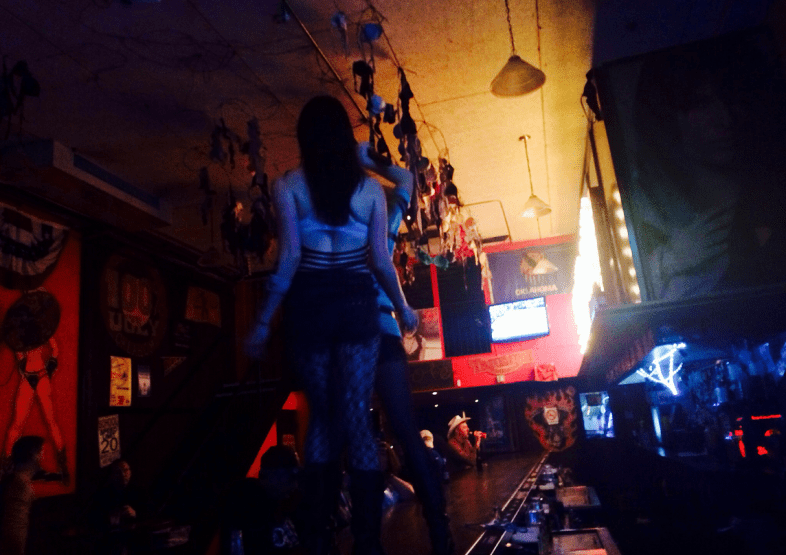 2. “When you’re sexually intimate with someone outside your relationship, it’s cheating. Why would anyone allow their partner to grope and/or be groped by another person? It’s disrespectful, not to mention disgusting. The idea of my husband at a nudie lounge makes me want to…I just can’t even. I’m going to stop talking about this now.”

3. “Whether it’s in honor of a buddy’s bachelor party, or it’s the culmination of stupidity after a boys’ night out, dudes are gonna end up at strip clubs sometimes. It’s just the natural order of things. If you can’t accept that, you’ve got two options: lie to yourself and look the other way, or date women.”

4. “My boyfriend definitely goes to strip clubs when the occasion calls for it, but he always reports that the experience was dull and disappointing. If he’s lying on my behalf, I’d urge him to keep up the good work. No reason to be truthful about that kind of thing.”

5. “My advice to any woman who doesn’t want her man visiting a strip club? Get used to it. It’s bound to happen, and you’re only going to piss them off if you whine about it. Choose your battles carefully, sisters.”

6. “Personally, I enjoy a night out at a strip club. I’m totally turned on by the female form, even though I’m hetero. So I can’t really get upset if my significant other goes to a strip joint. The key is the frequency of visits. If it becomes a regular habit, it’s unacceptable, not to mention expensive as hell. Monitor that shit, but don’t let it bug you unless it’s a real problem, you know?”

7. “The whole ‘cool girl,’ I’m-too-chill-to-get-upset-at-my-boyfriend phenomenon has gotten so out of hand. Why pretend something doesn’t bug you if it does? So many of my friends say they’re okay with the idea of their boyfriends going to a strip club, but I know they don’t actually feel that way in their hearts. I’m absolutely against it, and I’m not afraid to say it.”

8. “Only an idiot would believe that her significant other isn’t ever going to strip clubs. I just don’t want to be lied to about it. That’s my policy. People should own their actions. If you want a boozy night out of titty twitching entertainment, tell me in advance. Don’t mention it after the fact and expect me to understand.”

9. “A few months back, the morning after my boyfriend met up with some friends for ‘drinks,’ I found a receipt for $720 in the pocket of his jeans. I was sickened that he’d spent so much on a random evening out. A hunch led me to Google the restaurant address, and that’s when I realized he’d been to a strip club. When I asked him about it, he claimed he was going to tell me, but the fact that he lied to my face makes me uncomfortable. I wish he’d had the courtesy to give me the chance to be okay with it. Trust is so easy to break, and so damn hard to rebuild.”

10. “I love strip clubs! My boyfriend and I go together once every few months. We both get off watching each other get lap dances. But if he went alone, I wouldn’t be psyched about it. I like that we do it as a couple.”

11. “As long as it’s for a special occasion, like a bachelor party, I’m okay with it. I can’t say I like the idea of a naked stranger dry humping my boyfriend, but I’m not a prude. At least, I don’t like to think of myself as one.”

12. “I’ve always prided myself on dating decent men. I know some women whose husbands visit strip clubs. These ladies brush it off—rather, they try really hard to be at peace with the whole thing in spite of what their gut says—but I think it’s dirty. Why date a guy who wants to hang out with a bunch of whores instead of heading home to his lovely wife?”

13. “I’m a staunch feminist, and I think sex workers get a bad rap for no reason. I would never deny my partner the right to go to a strip club, and I expect the same level of respect and understanding in return.”

14. “I dated a guy in college who ditched me one Valentine’s Day to attend a party at the Playboy mansion. The ticket cost $2,000! I remember sobbing about the situation to my mom, who urged me to consider that there are men who would never do that kind of thing (like my dad, obvs). I’m sure she’s right—just as I’m sure there are guys who pride themselves on avoiding strippers altogether—but I’m not sure I’m cut out to date a ‘good’ guy. Maybe something’s wrong with my brain, but I think I need a man who hits up a strip club every so often.”

15. “I can’t deny that it makes me seethe with rage to think about my boyfriend at a strip club. Picturing his head wedged between two giant fake breasts being ‘motor-boated’ or whatever makes me want to vomit far and wide, like Mount Vesuvius. But if we’re being one hundred percent truthful, I have to admit that, while I haven’t exactly cheated, I’ve treaded on some questionable territory over the years. What can I say? I’m a walking contradiction. Aren’t we all?”