Skip to content
Report This Article
What is the issue?
Read the book based on the popular “real sex stories” series here.

1. Seduced by my best girlfriend during a high school study session.

It’s natural to develop a homoerotic bond with a really close friend when you’re a teen, but my childhood bestie Maddie—who was always advanced for her age, sexually—took things further than most.

Late afternoon one school day, Maddie and I were in my room, lying on my bed. We were supposed to be studying for a History test, but Maddie was too giddy to concentrate. She kept messing around, flipping textbook pages before it was time, whispering silly things in my ear.

Next thing I knew, we were wrestling—and soon enough, Maddie had pinned me, straddling me at the waste and holding my arms down above my head so I was paralyzed on my back. “I’m bored of studying,” she said, “and I’ve got a better idea anyway.” Then she whipped a bottle of lotion out of her backpack’s front pouch. “I’m going to give you a massage,” she said, devilish but charming.

Before I could argue, Maddie had lifted up my shirt and started smoothing lavender scented lotion all over my midsection, tickling me here and there. I bit my bottom lip as she inched her way north to cup my perky B-cup breasts with delicate vigor. Looking straight into my eyes, she leaned down ever so slowly, as if to kiss me on the lips, but at the last second she darted towards my nipples and started sucking. Simultaneously, she flexed her hips back and forth so our crotches rubbed together. I’ll never forget the warm sensation that blossomed from my vagina and metastasized throughout my insides at that exact moment. For the next half-hour or so, Maddie worshipped my entire body. With Maddie’s face between my legs and her tongue tickling my clitoris, I orgasmed for the very first time.

To this day, Maddie and I are friendly—flirtatious, even—but we’re both dating guys and we’ve never revisited that level of intimacy. I think she just wanted to teach me something. Bless her for that magical lesbian lesson.

I’ve always had a weakness for the sight of a woman devouring a popsicle. I mean, come on. Nothing’s hotter than a woman inadvertently blowing the most phallic dessert out there—licking it from base to top and then pursing her lips over its tip as she sucks the sweet juices out. Summer’s my season, you could say.

Anyway, one day I was walking my dog Scottie in the park when I laid eyes on this beautiful punk twenty-something with blue hair, wearing purposefully torn fishnet stockings, a cropped t-shirt, and the shortest shorts possible. She was seated on a bench, enjoying an ice pop. The thing about this girl is that she seemed to know exactly what she was doing to guys as they passed by. I watched her engulf that popsicle methodically, inviting men to substitute penis for pop and to enjoy the scene vicariously—to believe that she was their personal sex kitten, dutifully practicing her oral skills. What a cock tease, I thought. But I was impressed.

So I sidled on up to her and introduced myself. When she told me her name was Jane, I sensed she was lying, but I didn’t care. Jane wanted sex, and I wanted to give it to her. I tied my dog’s leash around the bench, grabbed her by the hand, and ushered her to a clearing in the woods on the edge of the park where I figured we’d be safe from detection. We didn’t bother getting naked. We fucked in the grass like wild animals and screamed so loudly as we climaxed together, I’m shocked we didn’t get caught. Jane (if that’s even her name) is fucking amazing.

3. Employed as the neighborhood’s naughtiest babysitter.

The summer between my freshman and sophomore years of college, I took a job babysitting for a family down the street from my parents’ house mostly because the kids’ dad, Rick, was so fucking hot. I treasured every precious second I got to spend with Rick alone while his Stepford Wife touched up her makeup before they went out at night. It was my devious mission to steal a kiss from him by the end of the summer.

By some miracle, I got my chance way sooner than I thought I would. One Friday night I wasn’t scheduled to work, Rick’s wife called at the last minute and asked me to babysit. Rick was sick, she explained, so he couldn’t really watch the kids, and she felt obligated to attend a cocktail party they’d committed to. Obviously, I accepted.

I put the kids to bed an hour early and knocked on the master bedroom door to check in on Rick. If he was really feverish and sick, I figured I’d pat his head and kiss him on the forehead. Creepy, maybe, but I was crazy attracted to the man.

Rick opened the door in a pair of boxers and a robe he’d left untied, showcasing his perfectly tanned six-pack. As soon as our eyes met, I knew in my gut that he’d faked being sick just to be there with me. I’d never felt so wanted, or so fucking horny. I could see the bulge start to form beneath Rick’s underwear as I approached, but he insisted on taking things slowly. He closed the blinds and pulled me in for a long, deep, passionate kiss. Then he glided his hands through my hair and down my sides and legs, tracing my figure. The foreplay seemed to last for hours, and I soaked in every minute. By the time Rick was fucking me from behind, I was so hungry for his dick I could barely see. We had sex all over the house, in every position possible, while the kids slept and his wife sipped champagne and nibbled on tiny quiche. I orgasmed five times, a personal record I have yet to beat.

A few Fridays later, I was thrilled to hear that Rick was feeling under the weather again. That was a summer I’ll never forget.

About five years ago, my wife decided that we should lease a house in Jamaica for a week in February with two of her former sorority sisters and their painfully uninteresting husbands. I was reluctant, but I figured what the fuck since I like the beach enough to entertain myself for a week on any island.

On our third night there, we all decided to rent a boat for a kind of private, grownup booze cruise. We all got pretty drunk as the sun set and I was having a way better time than I’d thought I would.

Then the craziest thing happened. I exited the bathroom down below deck to find my wife’s best friend from college standing right there, clearly waiting for me. She didn’t say a word. Instead, she shoved me, hard, into the corner. I was wedged between a giant cooler stocked with beer and a few life jackets, drenched in pitch black darkness, when she yanked my pants down and started sucking on my dick right then and there. I couldn’t believe it—any of it—but I didn’t want it to stop, so I didn’t say a word. I let her suck and slurp and massage me with her tongue and hands. She was talented (better than my wife, if we’re being honest), and she managed to swallow every single drip of my come.

Then, without a word, she stood up and took her turn in the bathroom. I pulled up my pants and headed back to the main deck, shocked but happy. Neither of us has ever acknowledged what happened.

5. Tempted by a Hollywood bigwig in the most awesomely clichéd way.

At twenty-five, I was on the rise as a hot young neophyte actress. I had just starred in a string of commercials for a national fast food chain and an indie flick that did respectably well at the box office, so the next step was to land a part in a blockbuster.

On the day of my scheduled meeting with the big shot producer who held my fate in his hands, I took a warm bubble bath and practiced how I’d greet him while looking at myself in the bathroom mirror. I wore platform wedge sandals, a short skirt, and a blouse with a plunging neckline. (I’ve never been naïve enough to think that looks don’t matter.)

What I didn’t expect is that I’d be attracted to the guy. He wasn’t conventionally handsome—he was a bit overweight, and average in height—but he had this energy. This charisma! This power! I wanted him immediately, and I let myself fall into the clichéd casting couch trap he laid out for me.

Within five minutes of entering the executive suite, my shirt was off and my hand was on his crotch. He scooped me in his arms, carried me across his expansive corner office and set me down on a black leather reclining char. We had sex right there and I can still picture the floor to ceiling views of Los Angeles that made the whole thing that much more remarkable.

Yes, I was merely a plaything to him, but I was never dumb to that fact. I wanted to play vixen as much as I wanted a role in the man’s next hit film. I didn’t get the career defining gig, but whatever. Great sex, no regrets. 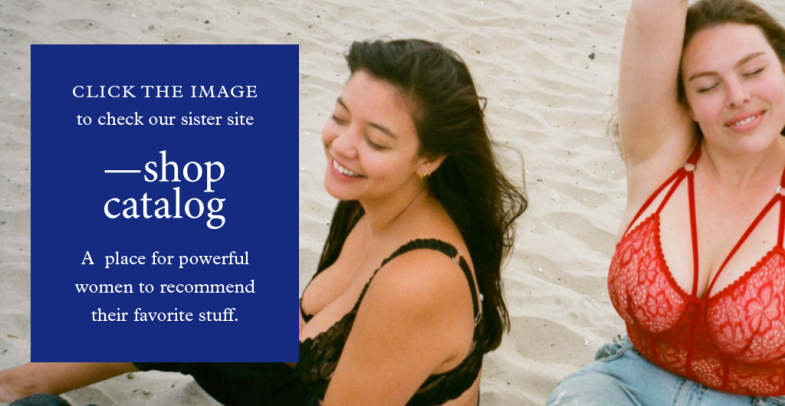 You should check out Shop Catalog here.