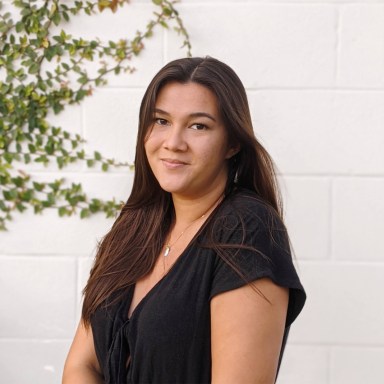 She was only eleven years old. She sat in the backseat of her mom’s minivan, embarrassed and sniffling back the tears. She never missed volleyball practice, but today the pain was excruciating.

She had finally come clean to her mom about the golf ball sized lumps that kept appearing in her groin. She thought about how disappointed her coach was going to be, and how disgusting she must be for constantly leaking puss and blood.

Her mom promptly called the doctor, and put the phone on speaker as the nurse explained, “we’ll have to make an incision along the abscess, then we’ll drain it by inserting a tube. Afterwards we’ll have to pack the hole full of gauze so it can heal over the next week.”

Horrified, she could no longer stop herself from crying.

Ten years later, I know a lot more about those lumps, in fact I even have a name for them: Hidradenitis Suppurativa, or HS. But learning that name came with years of painful tests, procedures, and failed treatment. Sadly, this is a journey that most people with HS know all too well.

On average, most patients won’t receive a diagnosis for seven years.

During those seven years, many of us are led to believe wild misconceptions about our disease and about ourselves simply because there is little to no awareness, even amongst medical professionals. Like when I was 12 and I was told that my HS was an STD (even though I hadn’t been sexually active), and that I would never be able to have sex without transmitting it. Or when I was 16 and my doctor wrote under the “prescription” section of my forms “bathe
daily,” as if hygiene was the issue.

Here’s the truth: HS is not an issue of hygiene; it is believed to be caused by an overactive immune system that produces too much inflammation. It is not an STI, and it is not contagious.

Most importantly, it is not at the fault of the person with HS.

That last one took me a long time to learn. Growing up with such an alienating skin disease, the body positivity space felt like a necessary community for me to be a part of. Instagram has created an outlet and connection point for just that.

At first, my account was just a place where I shared food inspiration.

Meanwhile, I began following other accounts that posted candid photos that highlighted the creator’s beauty, fat rolls and skin blemishes included. After a long while of watching from the safety of my foodie account, I felt called to join those people who I looked up to.

After a while I learned to be at peace with my scars, rolls, and most of my visible “flaws,” but I couldn’t quite figure out where my chronic illness fit into body positivity.

On one hand I was preaching that we should all embrace the things that make us feel different and unbeautiful, but behind the scenes I was loathing my body for causing me so much pain and for holding me back from doing all the things that I wanted to do.

Some days I would have to miss class or work because simple movements like walking or lifting my arms would make me gasp for air, it was so painful. I’d have to make up excuses to my roommates about why I couldn’t go to the beach or out to lunch with them. These were the times when I would ask myself, “How am I expected to ever love this part of my body when all it
seems to do is cause me pain?”

That’s when I began reading a book titled The Body Is Not An Apology. Often referred to as one of the founders of the body positivity movement, Sonya Renee Taylor answered my question in a mere few sentences: “Health is not a state that we owe the world. We are not less valuable, worthy, or loveable because we are not healthy. Lastly there is no standard of health that is achievable for all bodies. Our belief that there should be anchors the systemic oppression of ableism and reinforces the notion that people with illnesses and disabilities have defective bodies rather than different bodies.”

When I look back at my eleven year old self, there is so much I wish I could tell her.

Julia Mau is a body acceptance advocate and all around foodie. Her dream is to help women heal their relationships ... Follow Julia Mau on Instagram or read more articles from Julia Mau on Thought Catalog.

Hanna Smith Wants To End The HS Stigma, So She’s Advocating For Early Diagnosis And Intervention