In the middle of an intensely foggy summer night on July 25, 1956—a little over 40 years after the infamous sinking of the Titanic—the giant Italian cruise ship SS Andrea Doria was slammed in the side by the SS Stockholm,, ripping a six-story gash in the Doria‘s side. By the next morning, the badly damaged Stockholm had returned to New York Harbor, while the Andrea Doria had sunk to the bottom of the ocean.

Like the Titanic, the Andrea Doria had been described as “unsinkable.”

However, the Andrea Doria eventually sank to the ocean’s bottom, where it continues to decay (and lure adventurous divers) to this day. Forty-six people died in the initial impact and an additional five died later. But nearly 1,200 passengers were safely rescued.

Here’s the story of the only collision between two ocean liners in world history.

1. The ship was named after a 16th-century Italian admiral who was known as “the father of his country.”

An Italian historical icon, Andrea Doria (1468-1560) is often referred to as “the father of his country” much like George Washington is in the United States. Doria fought heroically for Italy in several bloody maritime battles and is also credited with being the first mariner to invent a method for sailing against the wind.

2. The ship was a gleaming, high-tech testament to Italy’s renewed confidence after losing World War II. 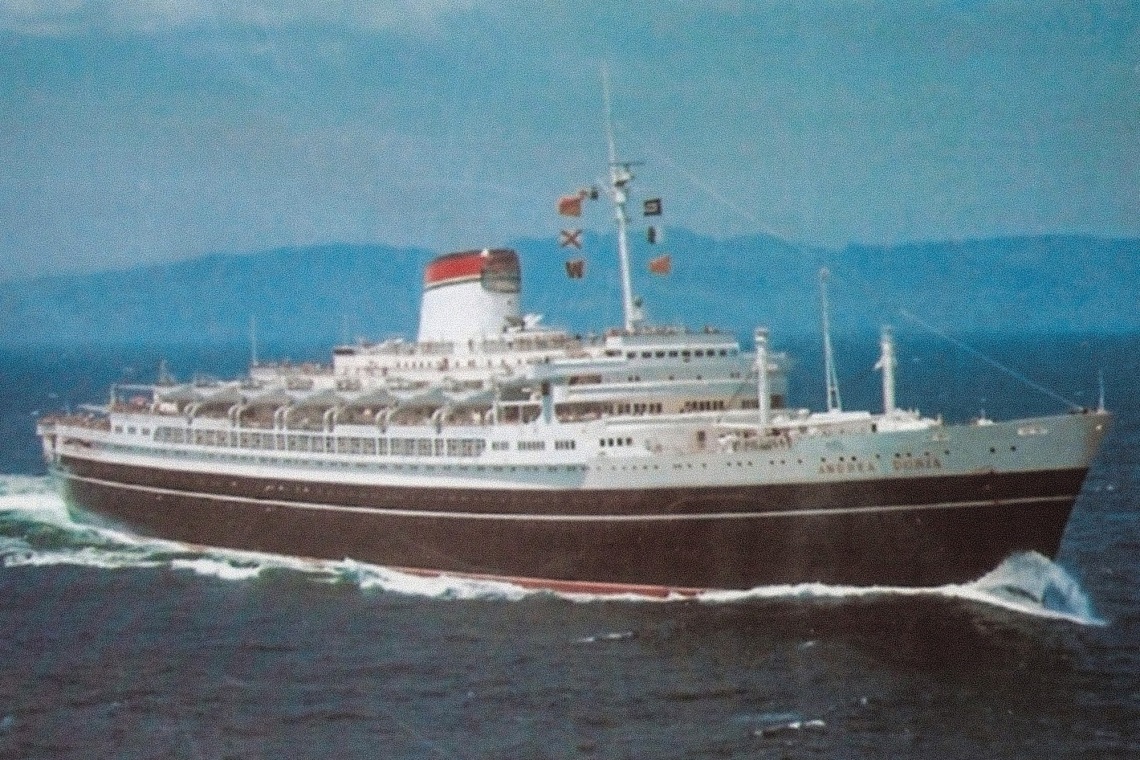 After fascist Italy’s crushing loss in World War II and the subsequent devastation of its economy, Italians desperately scrambled to regain a sense of national pride. As part of this national revival, the Italian Line commissioned the construction of two world-class cruise liners: The Andrea Doria and the Cristoforo Colombo, which was named after Christopher Columbus. Built in 1951, measuring 700 feet long by 90 feet wide, and weighing an astounding 29,000 tons, the Andrea Doria was generously festooned with antiques and modern art to give it the pizzazz of a floating art museum. It was packed with paintings, murals, mirrors, crystals, jewelry, ceramics, silver, and china place settings.

3. It was not the first ship called the Andrea Doria.

Since Andrea Doria was a national hero, Italians had been naming ships after him since at least 1885. In 1913, the Italians designed a battleship with 13” guns that they christened the Andrea Doria. It was rebuilt from 1937-1940 in preparation for World War II but largely stayed out of the conflict. It was finally scrapped in 1957—a year after the tragic sinking of the Andrea Doria cruise liner.

4. The brutal, middle-of-the-night collision with another ship that left a fatal, six-story hole in the side of the Andrea Doria.

On the hot and steamy day of Thursday, July 26, 1956, a Swedish-American liner called the SS Stockholm disembarked from Manhattan en route to Copenhagen and ultimately Gothenburg, Sweden. Compared to the Doria, the Stockholm was a small ship, weighing in at 12,000. But its prow was fitted with a steel rake designed to smash through ice, an attachment that would ultimately rip a hole in the Andrea Doria.

The Doria had set sail from Italy on July 17 with roughly 1,200 passengers and 500 crew members. Although shrouded in thick fog as it headed toward the continental US south of Nantucket Island, its captain kept sailing at a brisk speed because the ship was already an hour late from its projected arrival time in Manhattan at 9AM. Controversy still rages about who exactly was at fault (see below), but both ships’ captains made decisions that set them both on a collision course. To the horror of the crew on the Stockholm,, the sight of the massive Doria emerged from the fog when both ships were less than a mile apart and it was far too late to avert the disaster.

New Jersey native Pat Mastrincola was only nine years old and watching a movie in the ship’s tourist-class section when the deafeningly loud collision occurred:

All of a sudden, the ship made a tremendously hard turn. We all knew something was wrong. The movie screen and projector tumbled over. Dinnerware on shelves behind us avalanched down. The whole audience broke into a panic….Eventually, my mom, sister and I worked our way out to the ship’s fantail. Then the ship dipped further, to 25 degrees. B and C decks were completely flooded. That’s when terror really set in. Mother, sister, and I clung to the ship’s high side. The interior was filled with smoke. Splintered steel and lumber were everywhere. There was nowhere to go. It was foggy and dark. Visibility was zero. There was no sign of help.

When the Stockholm first struck the side of the Andrea Doria, forty-six people were crushed to death instantly. Three more were to perish during after the evacuation. This includes a four-year-old Italian girl who was accidentally dropped onto her head into a lifeboat by her panic-stricken father, a businessman who died from a heart attack while being taken back to safety aboard the Stockholm,, and a woman who fell and broke her back while attempting to board a lifeboat on the Ile de France.

6. The “Miracle Girl” who survived.

Amid all the lost life, there is one story of survival that borders on the miraculous. After the badly battered Stockholm disengaged from the Doria, Swedish soldiers heard the sound of a panicked girl crying out for help. It turned out be the voice of fourteen-year-old Linda Morgan, whose mother and sister were killed instantly upon impact but who, through a twist of fate, had been sent flying from her bed and onto the Stockholm’s deck. She survived, and the New York papers took to calling her the “Miracle Girl.”

7. The heroic evacuation that saved every person who wasn’t killed by the initial collision.

Although the Andrea Doria was fully equipped with enough lifeboats and rafts to safely evacuate every passenger onboard, the fact that the giant liner severely tilted to one side after impact rendered half of the boats and rafts inaccessible. There were also reports that the ship’s crew, violating international law, mostly used the remaining boats for their own escape, leaving their own passengers stranded on a sinking ship.

Luckily, once the alarm went out over the ocean that a giant ship was sinking, other ships sped toward the Doria to facilitate the evacuation. The Stockholm safely spirited 545 Doria survivors, 234 of them crewmen; the luxury liner Ile de France rescued 753 survivors; another ship called the Cape Ann was able to rescue 159; and the Edward H. Allen was able to safely take 77 survivors back to New York.

Although investigators and lawyers originally spent millions trying to determine legal culpability in the collision, both shipping lines eventually reached a private agreement, so we’ll never know for sure who exactly was at fault for the tragedy. But there’s plenty of blame to go around, from not only the crew of both ships, but from the design of the Doria itself:

9. At last count, 16 people have died trying to dive down to “The Everest at the Bottom of the Sea.”

It took 11 hours after the fatal impact for the Andrea Doria to finally sink to the bottom of the ocean about 200 feet down. It took about a week before divers began exploring the wreckage, which is deeper than usual for divers and is referred to as the “Everest at the Bottom of the Sea.”

Since it’s been over 60 years since the sinking, the dive is often referred to as “noisy,” because the giant vessel continues to collapse in on itself. It is also highly dangerous—at last count, 16 people have died attempting to explore this massive boat on the ocean floor.

10. The Andrea Doria in pop culture.

10 Cases That Prove Cruise Ships Can Be Floating Death Carnivals

10 Most Horrific Cases Of Hell On Earth