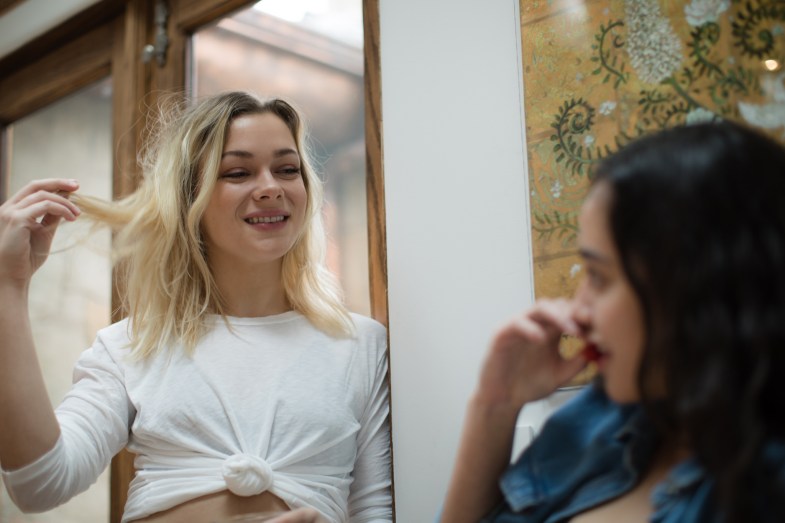 1. “If someone hits on my boyfriend in a bar, I personally take it as a compliment. There is obviously a line and he shouldn’t flirt back, but you know what you have and you’re proud of your person and they’re going home with you. Its kind of like a little ego boost for both of you. Then he walks away and comes to find me lol. However, if someone got vulgar or too touchy with him or me, I would step in or expect him to. Good luck!” – Clarissa, 24

2. “I would just sit and watch the show haha. If it happened with me being around, I’ll give my partner some space to handle it and maybe flirt back saying yeah, I know right? Or like that’s what I like about him or something. I wouldn’t take it seriously. Plus, it’s not my job to deal with such a situation, it’s his.” – Amy, 26

3. “If someone hits on my significant other, I take it as a compliment until it gets to the point where it is more than just polite acknowledgement. Once it gets inappropriate or vulgar, I will step in and talk to him man on man. If it is a women doing it, I would let her handle it unless she was obviously uncomfortable with it and didn’t know how to handle it.” – Alex, 29

5. “Maybe I’m just not confrontational but I always let it play itself out – if your SO cares about you they won’t be affected by another’s interest. It’s a good way to see their stand on the whole matter too.” – Elly, 28

6. “First of all, is your significant other uncomfortable with someone flirting with them? And if they are, would they prefer you to intervene? Consider these two questions and 1. let her work her magic or 2. politely but comprehensively explain him she’s your wife.” – Danny, 32

10. “Everyone’s interpretations of “hitting on” somebody are different. Just because you feel disrespected doesn’t necessarily mean you were.” – Richard, 28