My boyfriend Karl and I fell in love in Rome. We had met in DC only months before, friends of mutual friends, and when two of them got engaged, Karl chose me as his plus-one for the destination wedding. We stayed in a crumbling pensione not far from the Via Condotti and stores like Gucci and Louis Vuitton. But we didn’t amble through stores in between all the wedding festivities; we instead sat on the Spanish Steps, making out like teenagers and feeling happier than I ever thought possible. 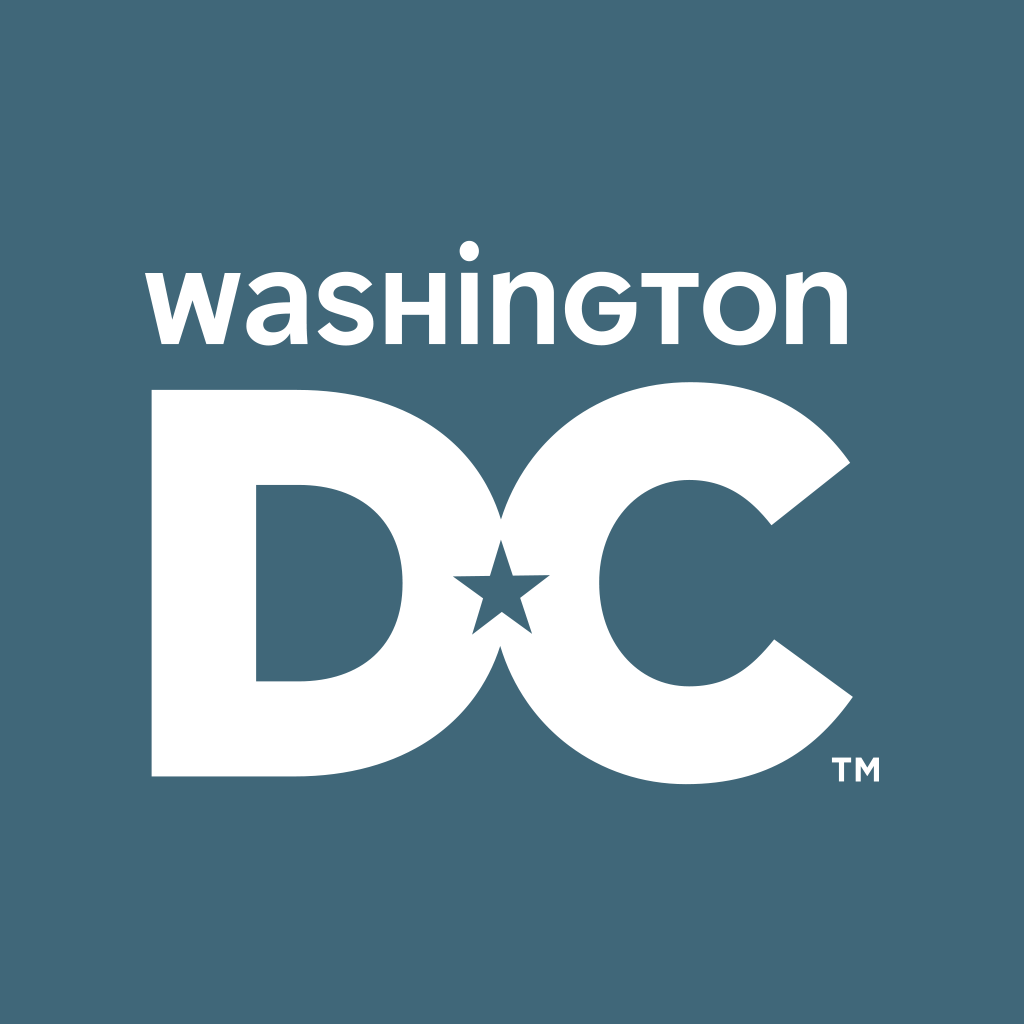 Make your own romantic weekend in DC a reality. Check out DateNightsDC.org for 100+ date ideas, incredible restaurants, hotel specials and cultural activities to experience together.
Sponsored by Washington, DC.
Learn more

What does Rome have to do with Washington, DC, you ask? Our own version of the Spanish Steps, hiding in plain sight (if you know where to look, of course) is in Kalorama, a quiet neighborhood of stately homes (many housing embassies and diplomats) in Northwest Washington. Inspired by Rome’s version, though on a much smaller scale, Kalorama’s Spanish Steps are ensconced by magnolia trees and lead to a fountain where water spouts from a lion’s head. On warm nights after we returned from our Roman holiday, Karl and I would pack a bottle of Italian red and head over to the steps. One night, Karl packed an engagement ring.

Washington DC is our nation’s capital, of course, but until that night, I had never really thought about our city as the capital of romance. Turns out, it is—especially after dark. In fact, there are backdrops just as dreamy as the Spanish Steps, sweet night spots and great date-night restaurants serving Insta-worthy food that rivals anything you’d find in Manhattan…or Italy. To find the perfect date nights in DC, you just have to know where to look. 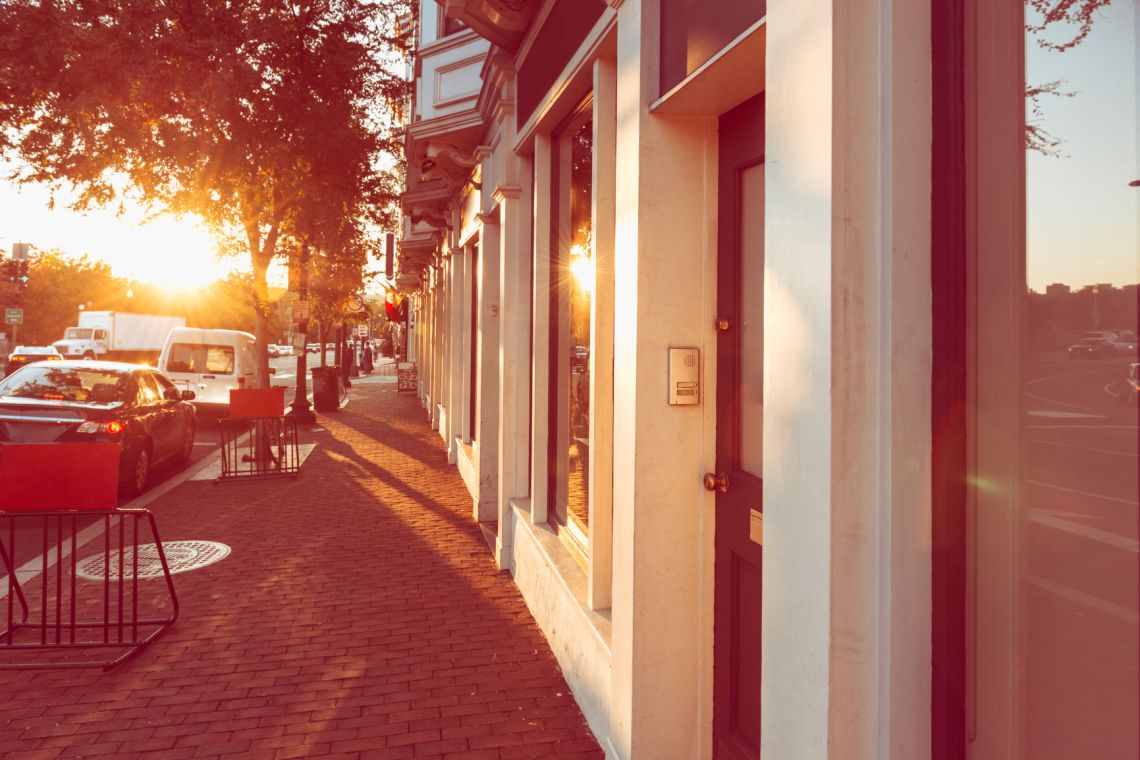 1. Go shopping (and maybe get engaged) in historic Georgetown.

It may not be the Via Condotti, but Historic Georgetown has some pretty fantastic shopping, with stores like Anthropologie, All Saints and Madewell lining its quaint, cobblestone streets.

Following an afternoon of strolling stores hand in hand, head to Martin’s Tavern for Happy Hour. Ask to sit in the Proposal Booth, where, in 1953, John F. Kennedy popped the question to Jacqueline Bouvier. Champagne is in order.

Next, wander over to Chez Billy Sud, an intimate French restaurant with pale green walls and gilded mirrors (and a perfect backdrop for photo ops). Grab a nightcap at Bar a Vin, a sister wine bar across the patio with a cozy wood-burning fireplace.

Where to stay nearby: The Ritz Carlton Washington, D.C. ($485 per night, enjoy a complimentary night for every three-nights you stay, now through December 31, when you book the Treat You package) 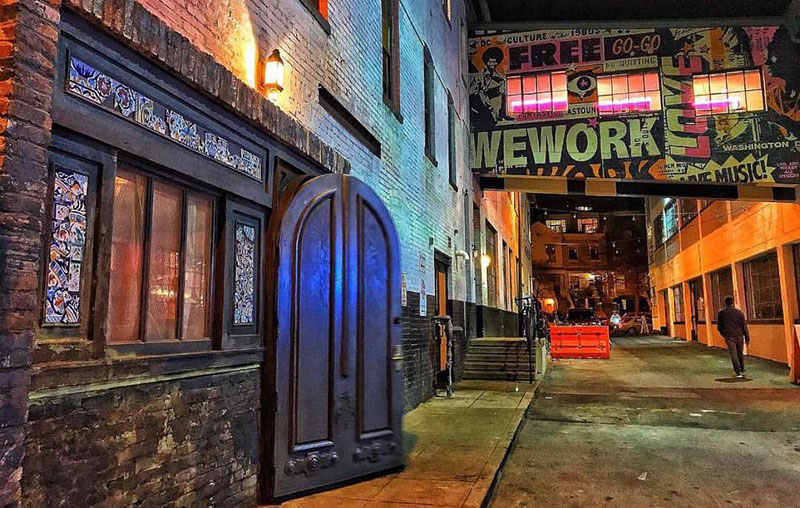 2. Teleport to Morocco by way of Maydan DC

When I first moved to Washington, I could tell the stretch of 14th Street between U and P streets had loads of date-night potential. But then Cafe Saint Ex and Bar Pilar, a farm-to-table resto with its cozy, clandestine “make out coves” (what staff members call “nooks,” like the two-seater near Bar Pilar’s staircase) moved in.

The neighborhood’s date-night mecca in my opinion is Maydan. Seriously, what’s not to love about walking into a tucked-away restaurant, sitting near an open fire, and nibbling on small dishes that make you feel as if you’ve been transported to Morocco? Continue the journey over at Le Diplomat, for pastis and heart-warming creme brulee, or catch a late-night indie rock show at The Black Cat.

Where to stay nearby: Hamilton Hotel Washington, D.C. (Romance Package includes a complimentary bottle of Champagne and breakfast for two.) 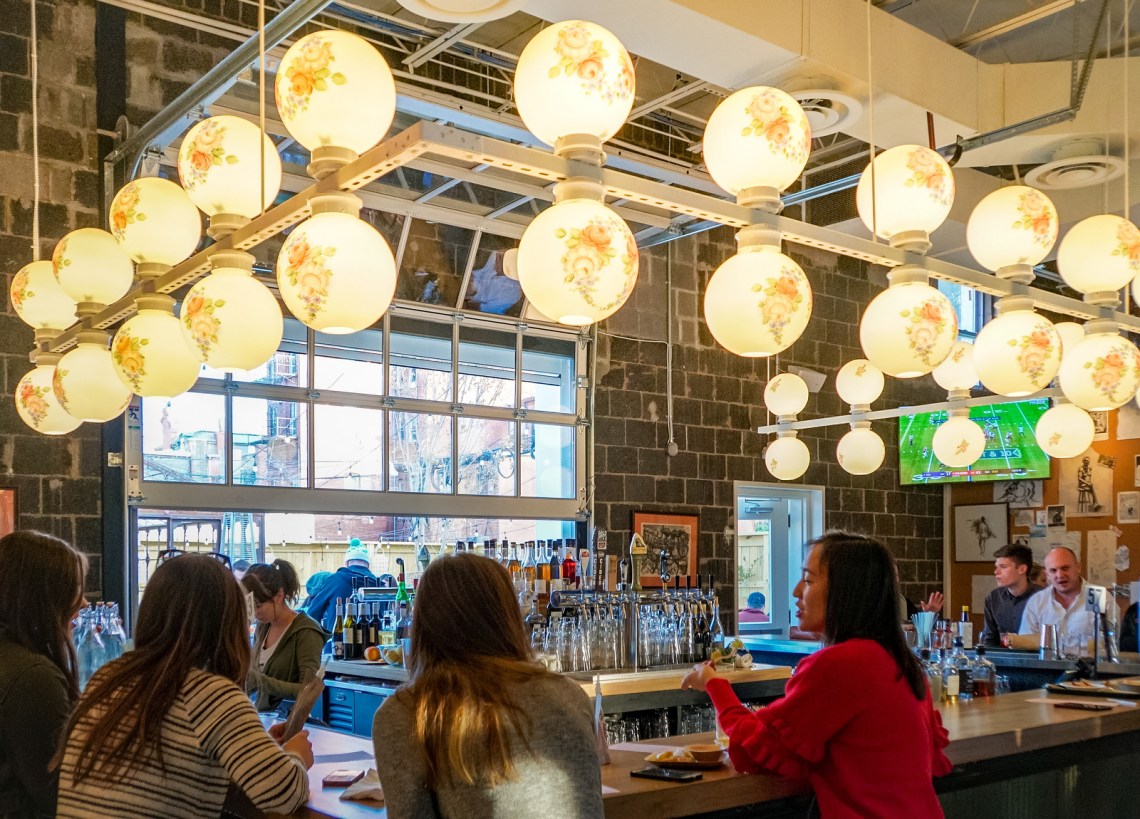 3. Get lost in the labyrinth of Blagden Alley

Hidden inside an unsuspecting city block in DC’s Mount Vernon neighborhood is a labyrinth of bars and restaurants known as Blagden Alley (some say it’s also known as Engagement Alley—proposals are practically a daily occurrence here).

Start off in Columbia Room’s Spirits Library and warm up with an Old Grogham, a steamy brew made with gin and earl gray tea. Next, hit Calico, featuring Eastern-shore inspired bites like steak sandwiches, tomato pie and lobster mac and cheese. Or slip into The Dabney, a farmhouse-chic restaurant with an open kitchen and—yay—another cozy, wood-fired oven. Work off those chicken and dumplings with a stroll to the mall to see the monuments by moonlight.

Where to stay nearby: The Willard InterContinental Washington D.C (Hit the Round Robin Bar for a night cap. It’s been a hotspot for social and political movers-and-shakers since the days of Abe Lincoln and features a menu of presidential drinks from legendary bartender and cocktail historian Jim Hewes.) 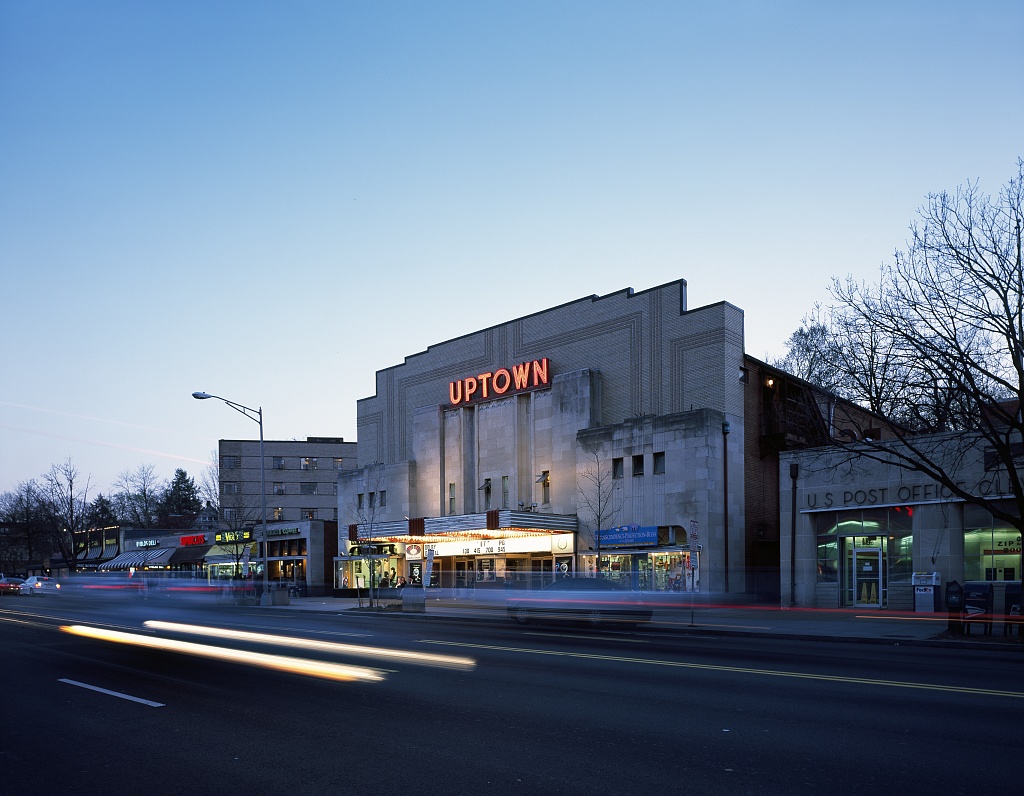 4. Canoodle during a movie at Uptown Cinema

The day after Karl and I got engaged, we took the Metro to Cleveland Park and saw what Karl considers to be the greatest love story of all time: “King Kong.” It was playing at DC’s famed Uptown Cinema. Whatever you decide to see (hopefully, it won’t feature a gorilla as leading man), sit in the balcony for canoodling when the lights go down.

After the show, slip into Bindaas, an intimate little gem run by Vikram Sunderam, recipient of a James Beard Award for sister restaurant Rasika. Here, small plates of Indian street-style food are served in a jewel box space set off with spice jars and saffron-colored banquets.

Where to stay nearby: Marriott Wardman Park (celebrate the historic hotel’s 100 years and stay for a third night for just $100) 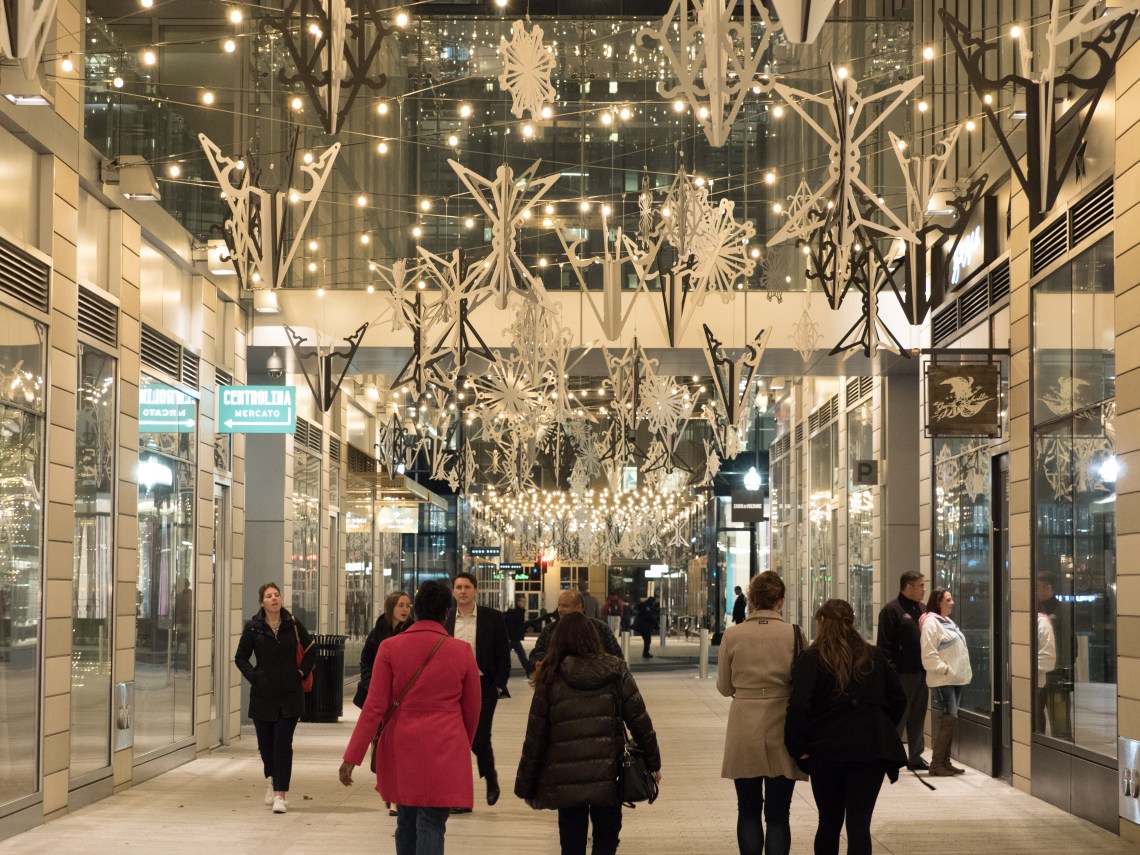 5. Visit the urban paradise that is CityCenterDC

By day, CityCenterDC, a 10-acre urban paradise of plazas and parks and pedestrian walkways, is a shopping mecca, with stores like Hermes and Dior lining Palmer Alley. By night, it’s pure romance, aglow with twinkling lights and couples strolling hand in hand.

Steal a kiss under The Gateway, a three-plane digital art display that spans 25-feet high and 50-feet wide. My pick for sweet spot dining is Centrolina for their handmade pastas and wines from Umbria. Its floor to ceiling glass windows and central marble bar are stylish beyond words. Finish the night with gelato and espresso from Dolcezza—the perfect pairing for a perfect pair. 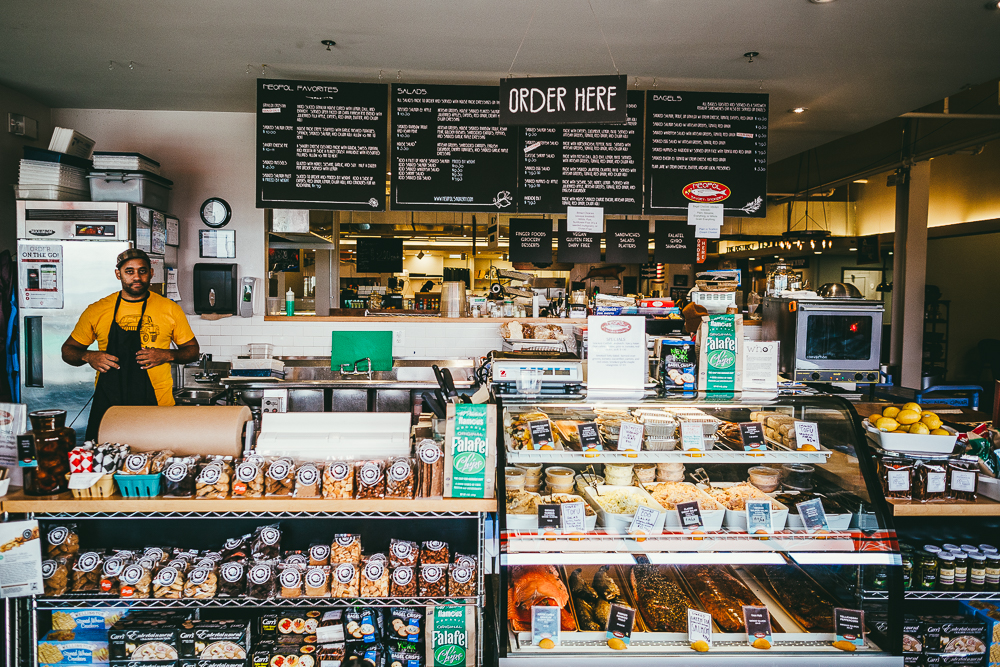 6. Dive into Union Market for oysters and books

DC’s most delicious destination is Union Market, a revitalized food hall built where the original market once stood decades ago.

After enjoying an aphrodisiac snack at Rappahannock Oyster Bar or bulgogi beef tacos at TaKorean, catch a reading at Politics & Prose, an offshoot of DC’s famed independent bookstore. Then head to St. Anslem, an industrial-meets-modern (think exposed brick and stacks of vintage books) tavern that took over the soaring space of an old Army Navy store. Reserve a spot in the Beef Steak room for an all-you-can-eat finger food experience that requires guests wear aprons. The market is open every day of the week except Mondays.

Where to stay nearby: Kimpton George Hotel (book 3 nights and get the third night free) 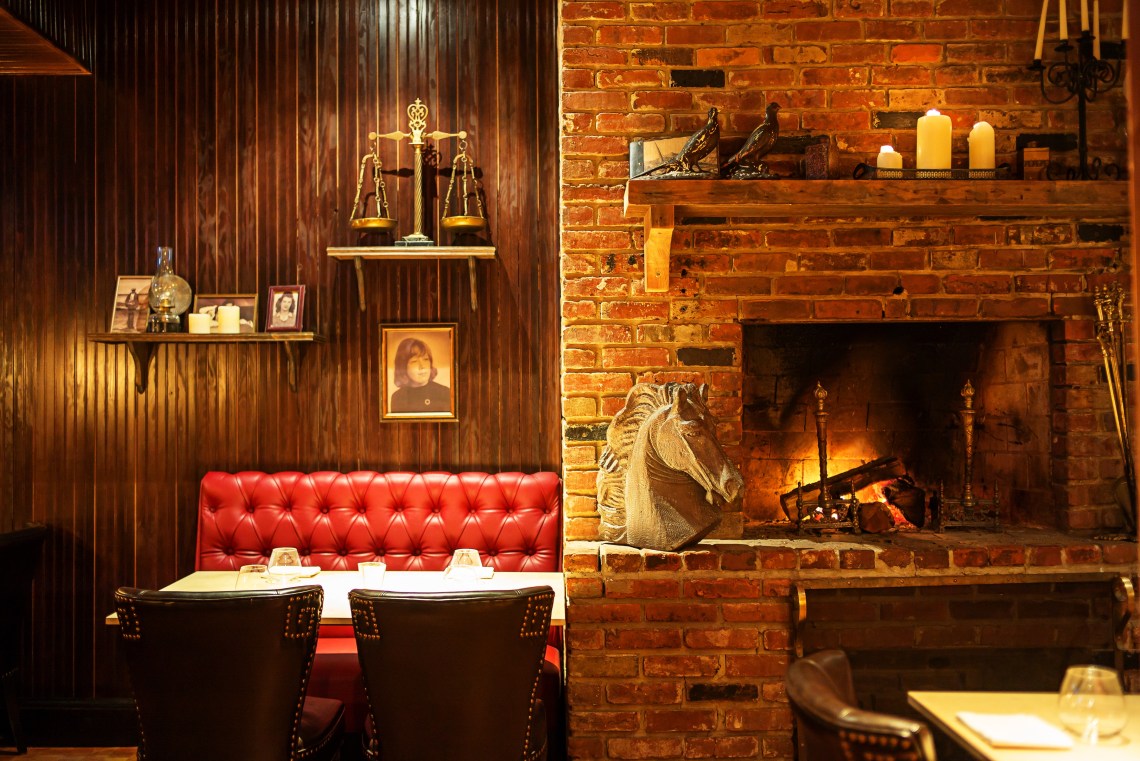 7. Stroll the courtyard before cuddling up at Iron Gate

If you want to shift your date into romantic overdrive, Dupont Circle’s Iron Gate has it all: Wisteria branches covering a secluded courtyard (with heaters and blankets, should you want to cuddle up and dine alfresco) and plates meant for sharing. Book the table for two by the fireplace and ask your server to recommend something off the restaurant’s nearly 400-bottle wine list.

Continue the gastronomic indulgence the next morning by enjoying Sunday brunch at Siren by RW, tucked in The Darcy hotel, starring adventurous dishes like grilled Spanish octopus and eggs along with mainstays like pancakes and omelets.

Where to stay nearby: The Darcy, Curio Collection by Hilton (book the champagne and caviar package starting at $199)

Make your own romantic weekend in DC a reality. Check out DateNightsDC.org for 100+ date ideas, incredible restaurants, hotel specials and cultural activities to experience together.