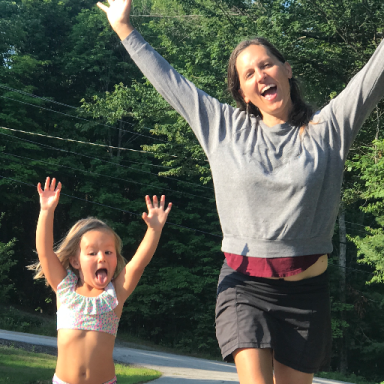 When my daughter was a toddler, I received a message from a friend that I should pick up my child whenever she wanted to be held because we can only hold them for so long. I immediately thought of the time my daughter grabbed at my clothing and asked to be held as I carried a hot pan from the oven to the counter, or when I was unloading groceries from the car as my daughter screamed from her carseat, or the many times I just needed to not hold my daughter so that I could reclaim my own space for just a minute. I wanted to throw my phone across the room when I got her message. I can’t hold her every time she wants to be held, I wanted to scream. I just can’t.

This message is similar to the “cherish every moment, they grow up so fast” expression that mothers with children much older than ours (who have seemingly forgotten the maddening days of motherhood) love to say. Sometimes I just want to say “bullshit” when someone says this. Not every moment is worth cherishing. Some moments just truly suck.

Like last night, when I yelled at my daughter. I got mad. I slammed my hand against the wall, said “NO” really loud, and stomped up the stairs away from her. I was overcome by a big emotion and lost control. I was so angry. Daisy cried and I stayed upstairs, breathing and coming back to myself. I felt so much anger, but what was I so angry about?

Was it about how I had just made two dinners because Daisy refused to eat the first one, then only picked at the second one? Or how she said she was still hungry and needed more food but said no to every option I presented to her from the fridge, freezer, and pantry? That doesn’t seem out of the ordinary or worth such an angry outburst. So what was I so angry about?

After a few minutes of breathing and taking space, I held Daisy and told her I was sorry and that I loved her. I explained to her, as best I could, what I was feeling and that I owned those feelings — they weren’t hers to hold or solve. Still, I felt bad, wrong, shameful, like I was a horrible mother. I wondered if something was wrong with me because I got so upset.

After Daisy fell asleep, I sat in my bed and wrote in my journal. I wanted to understand my anger better so that it didn’t feel so foreign and wrong. I wanted to slip beneath its strong current and watch it from the inside. What I learned surprised me in some ways but also just made sense.

Daisy is almost four and is in preschool five days a week now. This means I have more time and space than ever before to pursue my goals, whether they are related to work, home, or the community. My daughter also sleeps through the night now, so I am more rested than ever before (see, you will sleep again, I promise!). Unlike the first or even the second year of motherhood, I have energy again. The brain fog of new motherhood has lifted and I’m ready to be challenged and stretched in new ways. I am eager to learn, grow, do, and become. In short, I’m back in the world again and it feels great.

My daughter is a fiercely independent, outgoing, strong, brave girl who is becoming her own person. Every day I strategize, bribe, and wrangle her to eat her food, get dressed, brush her teeth, put her diaper and pajamas on, stay in bed, get in the car, stay in the classroom at the start of school and then leave the classroom when school is over, share her toys, clean up a mess….the list goes on. Its constant work and exhausting.

I love my daughter to the moon and back times a trillion, and at the same time, I find mothering to be one of the hardest things I’ve ever done. I went through an identity shift, as all new moms do, after she was born, which had me questioning everything, most of all who I am and what I want. The newness, madness, and magic of motherhood required me to put so much of myself to the side in order to care for this brand new being. All of it I did willingly and with an indescribable amount of love.

Now, I relish in the new time, space, and energy that has opened up for me as a result of Daisy being in school. I need it, crave it, and make it a priority like I have never done before.

I feel like I am two people living in one body. One of me is in the world, driven by a deep ambition to create and serve. The other me is home chasing my daughter around the room with a diaper in one hand and pajamas in the other, trying to distract her and make her laugh so I can get her ready for bed yet again.

One wants to take a break from mothering at times. The other one loves being a mother more than anything else.

Their energy doesn’t align. Their needs don’t match, and one usually gets more attention than the other. When this happens, when the part of me who is yearning to fly must instead make two dinners instead of one and then repeat the same bedtime routine over and over again, I break down. I can’t do this, I say. I can’t be a mother and be in the world at the same time. I can’t do this. I get angry. I get sad. I feel guilt and shame. I lose myself in an emotion and make my daughter cry.

Last night I realized I am simply human. I am not wrong or bad. I am human. I am navigating two worlds, and it’s new, and I don’t know what I’m doing, and as a result, I’m failing again and again. But I’m learning where my boundaries are, how and when I need to care for myself, and how massive an experience mothering is. I’m learning to love myself through it all, to stay in a place of love even when I feel like running, hiding, or shaming myself.

I am learning how deep my love goes and how profound my dedication to my daughter is. I am seeing how committed I am to her, to us, by always taking a step back, reflecting, regaining focus, and trying again. My awareness is growing, as is my ability to love myself through even the ugliest of moments.

And that is worth cherishing.