My transformation from boy to girl only took a couple of hours and about $100. Two months before Halloween, I had decided that this year I was going to dress up as Conchita Wurst, the “bearded lady” who won this year’s Eurovision competition, which for those less globally aware is like the American Idol of Europe.

What makes Conchita interesting is that she’s not just another drag queen lobbing insults or flinging herself on a bar stage for a fistful of dollar bills. Firstly, she looks like a woman with a beard as opposed to a comically exaggerated female simulacrum. This confuses many – a drag queen is obviously a drag queen, but what do you call a man that looks like a woman who keeps a beard? What gender is s/he representing?

Conchita is post-gender. She exists outside the need for definitions. She is the embodiment of uninhibited self-expression. Her triumph in the Eurovision competition was heralded as a victory for tolerance in a time when Europe is rife with racial and religious divides (not unlike the rest of the world). “This night is dedicated to everyone who believes in a future of peace and freedom,” Conchita said as she clasped the trophy to her heart.

Conchita and I already sort of look alike, with a similar facial structure, tan coloring, and a waif-like frame. She had inspired me with her talent and fearlessness, so it was with much anticipation and excitement that I ordered my wig online.

The night of Halloween, I rolled sheer panty hose over my hairy legs and slipped my feet into six-inch high suede wedges I had bought specially for the occasion. An hour in the bathroom with various utensils, creams, and powders was all that was needed to complete the transformation into Conchita.

I looked in the mirror at my full face of makeup: eyes exaggerated with false lashes and dramatic liner, cheekbones as sharp as daggers, and a glossy pout. A halo of dark brown synthetic hair framed my face and spilled over the beaded designer dress I wore. I had a disconcerting thought — I look better as a woman than as a man. My delicate facial features and tiny waist lend themselves much better to feminine allure than masculine appeal.

Even my friend who had spent the last hour painting my face was stunned by the final transformation. “He looks better than us when we go out,” she said of me to her other girl friend.

Wearing a dress felt perfectly natural. The heels I wore were a constant source of pain and potential peril during the night, but even walking in them did not feel so foreign to me.

When I stepped outside into the world, I had no idea what kind of attention I was about to receive. It began as soon as we piled into the Uber that would take us to the West Hollywood parade.

I sat in the front seat next to the driver and he began to ask me questions – where was I from, how long had I been in Los Angeles. It began raining and I started to fret about the traffic and the cost of the ride. “I’ll drive you for free,” he said and gave me a lecherous wink. “There’s no such thing as a free ride,” I replied.

As we left the car and began the parade, I felt men’s eyes scanning me from every direction. A blond guy passed by and touched me, as if to ascertain whether I was real and muttered, “beautiful” in appraisal. 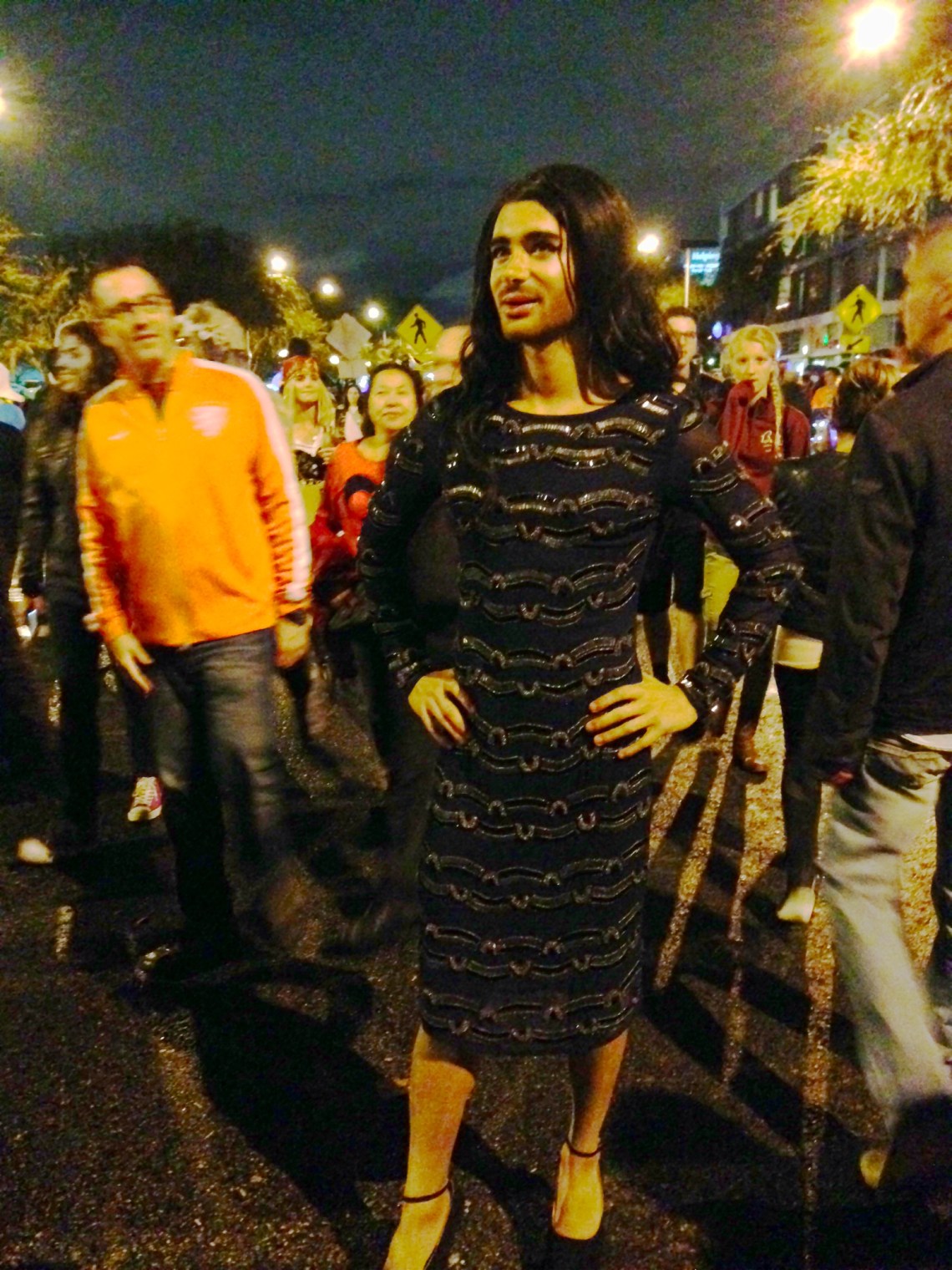 Despite sharing Santa Monica Boulevard with nine-foot tall ghouls, life-size Tinder screens, and CDC workers wheeling a hospital bed for Ebola patients, a man in a dress was still a novel attraction for many. People who would never normally look twice at me couldn’t help but stare, transfixed: teenage boys, middle-aged men, lesbians.

No one seemed to notice the three friends flanking me, despite the fact that one was dressed as a Dexter victim in a saran-wrap dress and their other looked like she had shared an elevator with Solange and then had her mouth sewn shut with a grisly wire hanging down from her lips. All eyes seemed to dart straight from my legs up to my face.

My demeanor as a bearded lady was different. While as a man, I might scan and observe other people with impunity, I kept my gaze straight ahead to avoid eye contact with anyone that could be perceived as an invitation.

I felt vulnerable and exposed. For the first time in my life I understood the fear of being raped. There was something primal and frightening in the look of men’s eyes. I wouldn’t have wanted to be alone dressed this way.

A beautiful woman is seen as an invitation for men’s lechery and attention. Just by virtue of her existence, she is a catalyst for catcalls and unwelcome advances. There is almost no outfit save for a Snuggie or burka that can shield her from men’s desirous regards.

After an hour or so of walking, my feet started to ache and we decided to leave. From the street, people honked their horns as we walked and shouted out their windows at me.

We were waiting for the car when a man crossed the street to come and speak to me. “Wow!” he exclaimed upon seeing me up close. His friend yelled, “Leave the girl alone.”

“What, what kind of name is that? You don’t look like a Conchita, that’s a low class name. You look like Jackie Onassis – you know who that is?”

“I’m dressed up as Conchita, the bearded lady who won Eurovision.”

“It don’t matter about no beard, look at those cheekbones – those eyes. You’re a beautiful woman.”

It seemed that most straight men – save for the one asshole in a restaurant who asked if my hair would come off if he pulled it – were strangely intrigued and drawn to me. Even the ones who expressed repugnance probably did so because they were upset about being attracted to a man who looked better than their girlfriend. All it took was a $60 wig, a dress, and makeup to confuse their notions of sexuality.

It raises fundamental questions – is it just long hair, a pretty face and a little body that men desire in women? What does it say about their orientation if they are seduced by easily replicated female artifice with not even a beard deterring their lust?

At the end of the night, I took off the wig, washed my face, and slipped off the dress. I was a boy again. For the billions of women though, objectification is something truly terrifying that they can’t escape.

Read this: 9 Gross Things All Girls Do (But Love To Pretend They Don’t Do)
Read this: 20 Things You Should Know About Dating An Independent Girl
Read this: 14 Things All Healthy Couples Do
Cat Calling Feminism Halloween Style Womens Style