Have you ever met someone who seemed to be highly emotional, theatrical, dramatic, obsessed with their appearance and overly seductive in their interactions with others? Someone who couldn’t stand not being the center of attention? Someone who would consistently go to extreme lengths just to draw attention back to themselves whenever anyone threatened to take the spotlight from them? You may have come across someone with the traits of Histrionic Personality Disorder.

The Traits of Histrionic Personality Disorder 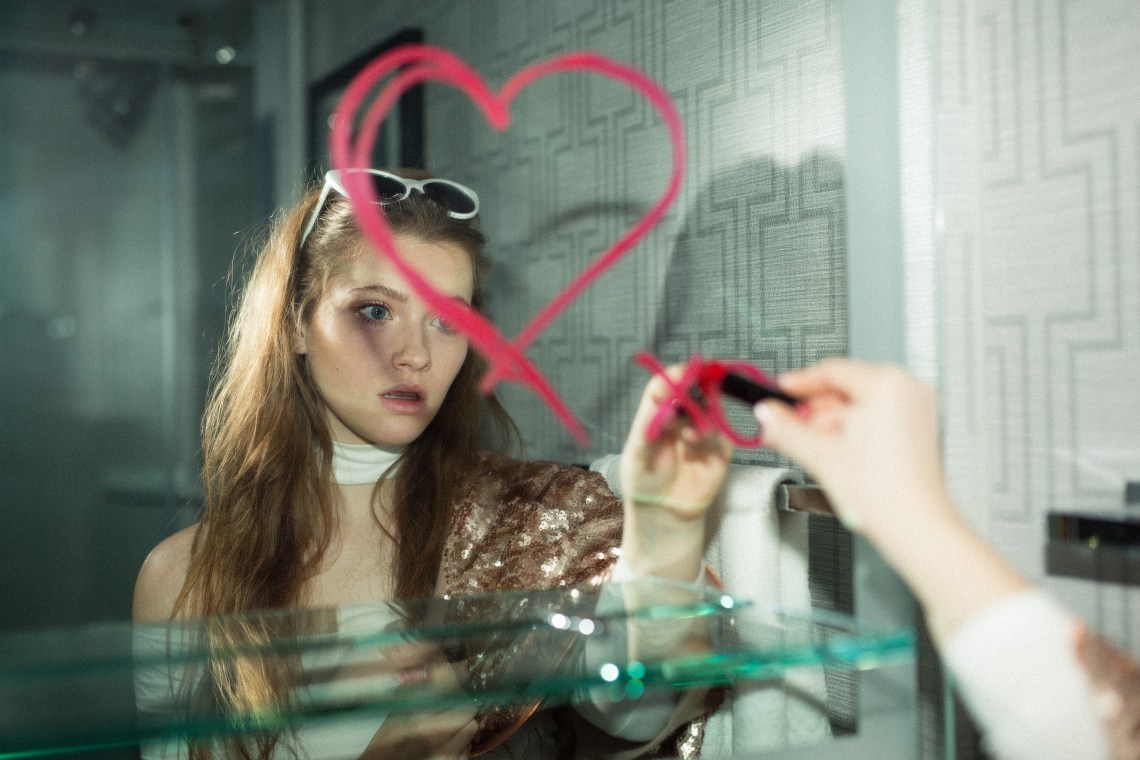 According to the DSM, people with Histrionic Personality Disorder are incredibly self-centered, are constantly seeking reassurance and approval and engage in inappropriate seductive behavior across a wide variety of contexts (including social, academic, occupational and professional). More women than men are usually diagnosed with this disorder. Whether this is because more women than men actually do meet the criteria for the disorder or because female sexual displays tend to be more stigmatized remains up for debate.

Histrionic individuals engage in very dramatic behavior with exaggerated displays of emotion and an impressionistic style of speaking that come off as disingenuous to discerning onlookers. Their emotions are so rapidly shifting and shallow that it can be difficult to determine exactly how authentic their emotions are or to what extent they are using their emotions to manipulate others. Interpersonally, they tend to be highly suggestible people whose opinions can change on a whim. They tend to perceive relationships to be more intimate than they actually are.

Histrionic Personality Disorder is also one of the few disorders which is directly tied to a person’s appearance. A person with histrionic traits will dress provocatively and demonstrate a hyperfocus on how they look. This can range from spending hours on their makeup to spending excessive amounts of time on sculpting the “perfect” body.

The Histrionic Personality in Relationships: Seduction, Drama and Provocation 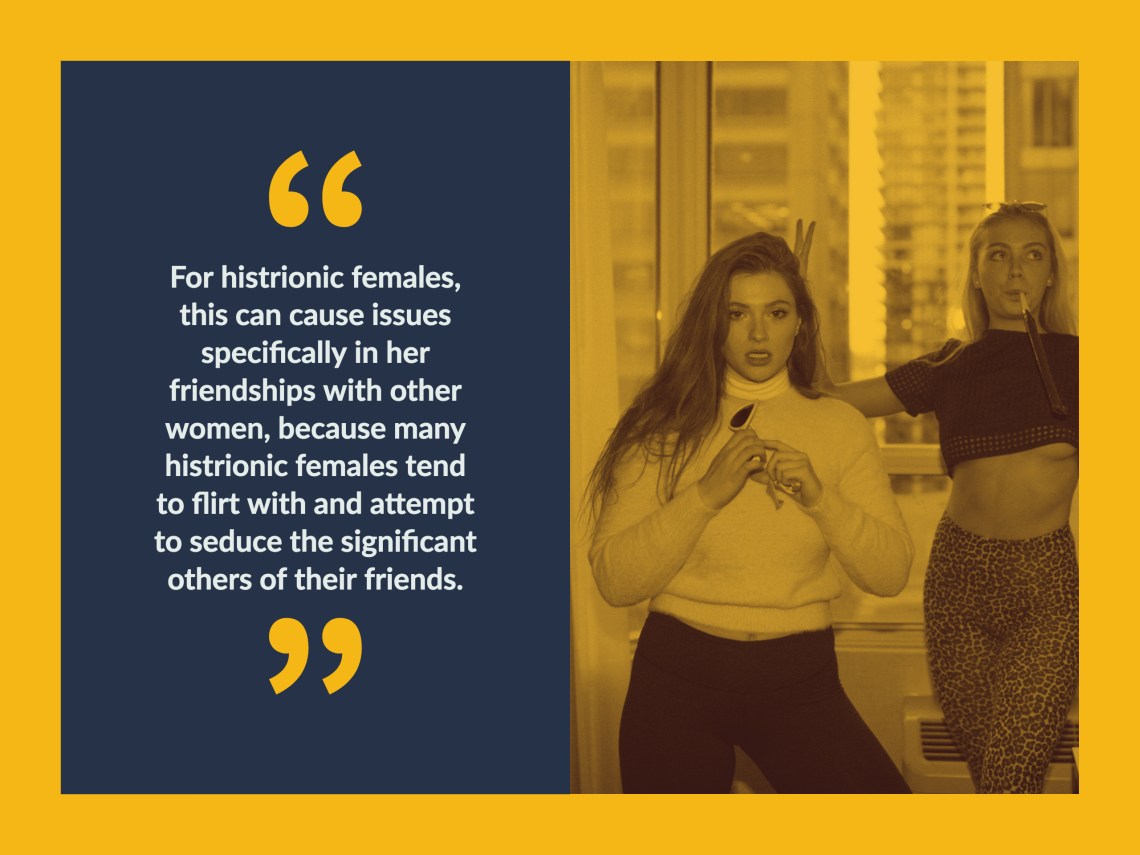 The histrionic female’s insatiable need for attention, combined with their tendency to overstep the boundaries of others and flirt with anyone and everyone in the near vicinity, can cause issues in their relationships and friendships. These individuals are likely to emotionally and physically cheat on their partners and also seduce those who are already in committed relationships. They are also likely to use their sexuality inappropriately to get ahead at school or at work.

According to Christine Hammond, LMHC (2015), while female narcissists dress seductively to achieve a certain agenda or goal (such as impressing someone), a histrionic female will don revealing clothing across any and all situations. Her provocative clothing, combined with overly seductive behavior, manufactures scenarios where she is indeed put into the spotlight – often to the detriment of her loved ones.

For histrionic females, this can cause issues specifically in her friendships with other women, because many histrionic females tend to flirt with and attempt to seduce the significant others of their friends. As Dr. Bressert (2017) writes:

“Individuals with this disorder often have impaired relationships with same-sex friends because their sexually provocative interpersonal style may seem a threat to their friends’ relationships. These individuals may also alienate friends with demands for constant attention. They often become depressed and upset when they are not the center of attention.”

The overlap with these disorders is not surprising. A histrionic personality’s insatiable attention-seeking can mirror the entitlement of the narcissist to be at front and center. Their bubbly, vivacious and energetic theatricality can easily be mistaken for mania. Their blatant self-absorption and need for constant stimulation can be similar to the lack of empathy and need for novelty present in an antisocial personality, while their high degree of emotionality can also resemble borderline traits.

But what differentiates the histrionic personality from the rest of these disorders and how does this type actually behave in real-life contexts?

A Portrait of a Histrionic Female 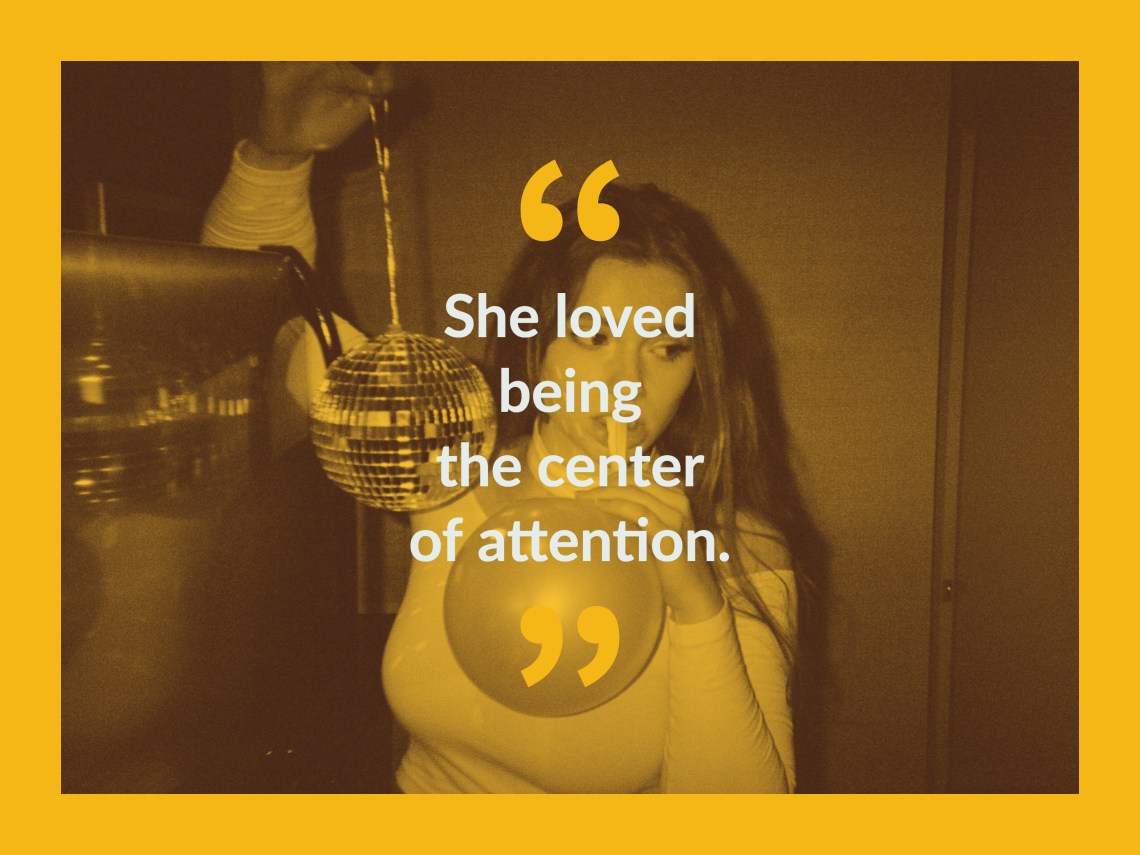 Daphne loved being the center of attention. People who knew her described her as a gregarious drama queen who was overly obsessed with her appearance. Her gestures were emphatic, her tone exaggerated and her whole personality came off as a bit too excessive and contrived. Yet she always managed to steal the show. She was flirtatious, energetic and sexually provocative, a social butterfly that went wherever there was a chance to immerse herself in the spotlight.

However, her self-centeredness became exhausting for the people around her. She was rarely reciprocal in her conversations, preferring to make the focus herself and her life. She was deeply uncomfortable when others got attention and made sure to do everything possible to bring everyone’s attention back to her – even going so far as to creating arguments out of thin air, being overly loud and disruptive in group settings or faking illnesses to garner sympathy. She was also known for telling wild, elaborate stories to her peers that they were pretty sure never happened.

Even though she barely knew anything about the people she called friends, she would act as if they had known each other their whole lives. The problem was, many of her “friends” only knew her superficially – and what they did know about her unnerved them.

While they found Daphne entertaining and amusing, they also found her behavior disturbing. Her loved ones had noticed that her overly flirtatious behavior had no limits; she would often flirt with the boyfriends of her peers and even their dads. It made them uncomfortable that she had no sense of boundaries.

At school, she was the “class comedian” and would always interrupt her professor with flirtatious comments, jokes or theatrical gestures or sudden outbursts that would always bring the attention back to her. She went so far as to have an affair with one of her professors to boost her grade.

When she got her first job out of college, Daphne seduced her male colleagues and made sure she was well-liked by everyone in the office. Although she didn’t have as many credentials as her hard-working peers, she was first in line for a promotion.

Later when Daphne got married, she became restless and started having an affair with her neighbor’s husband. It didn’t take long before her husband found out and her life fell apart. She spent years trying to regain the attention of men – the same type of attention she experienced from them in youth.

However, because she didn’t take the time to cultivate other aspects of her personality or practice empathy in her interactions with others, her friendships and relationships inevitably suffered. Her numerous betrayals and violations eventually caught up with her – and her superficial relationships disintegrated as her youthful beauty was no longer a primary facet of her usual seductive methods.

Later in life, she suffered immense depression from the gradual loss of attention and became increasingly emotional, dramatic and manipulative to try to win back the spotlight.

Daphne’s (albeit fictional) account is a revealing look into how histrionic traits can manifest across different contexts. Daphne’s seductive and attention-seeking behavior was so excessive that it seeped into every facet of her life – her academic life, her social life, her professional life and eventually her love life. Her reckless, risk-taking behavior caused harm to her loved ones and eventually led to her own downfall.

Although her lively personality was entertaining to her peers in the short-term, in the long-term, the shallowness of her relationships and her lack of respect for the boundaries of others was destructive to the ways in which others perceived her.

The cause of Histrionic Personality Disorder is presently unknown, though it likely stems from a combination of genetic disposition and childhood upbringing. Such a disorder is potentially linked to parental treatment: if a child did not receive enough attention (or unpredictable attention) from his or her parents, for example, it’s likely they would develop erratic behaviors related to attachment and emotion regulation in adulthood.

Only a mental health professional can make the diagnosis for Histrionic Personality Disorder. Individual psychotherapy, preferably solutions-focused therapy with a counselor who is not easily manipulated, is ideal for such a personality type. Group therapy is less ideal for this disorder, since this disorder has a direct impact on a person’s interpersonal functioning and the histrionic individual is likely to disrupt group settings with their attention-seeking tactics.

If you or someone you know suffers from histrionic traits, it’s important to get professional support. Self-awareness and the willingness to change is key to preventing the destructive nature of this disorder.

What Is An Adjustment Disorder? How To Tell If You Clinically Overreact To Change, Stress Or Fear