There is one quiet place left on this earth. One quiet place where there are no phones, no news tickers, no instant messages or even music. It’s the one place where you can have not just quiet but utter silence and meditative calm, even if those things don’t come to you naturally.

That place is underwater.

This morning, I ran a mile and a half down to the lake near my hotel. I left my shoes and phone and sunglasses on the dock and eased myself into the water. It was barely 8 am. The water was just warm enough to be pleasant, just cold enough to be invigorating and a few seconds later, I was enveloped in it, swimming along the surface.

What was on my mind as this happened? Nothing. It was still. Every few minutes I would switch from freestyle to breaststroke in order to scan for boats, but otherwise there was not a care to consider, a thing to worry about. Then, as I got out towards the middle, I switched to backstroke and watched the sunrise over my shoulder.

By the time I had turned back and pulled myself out of the water, I was both exhausted and energized. My head was clear and I knew exactly what I wanted to do that day. In other words, I was experiencing all the benefits of meditation and mindfulness—it just also happened that I’d knocked out my calorie goal for the day and saw a new part of a city I had visited many times before.

It has become cliche—and annoying, frankly—to try to sell people on Zen Buddhism and meditation these days. Sit and watch your breath, they say. Try a five day silent retreat. Read this book. Download this guided app.

I think there is a simpler solution: Just go for a swim. A long one. 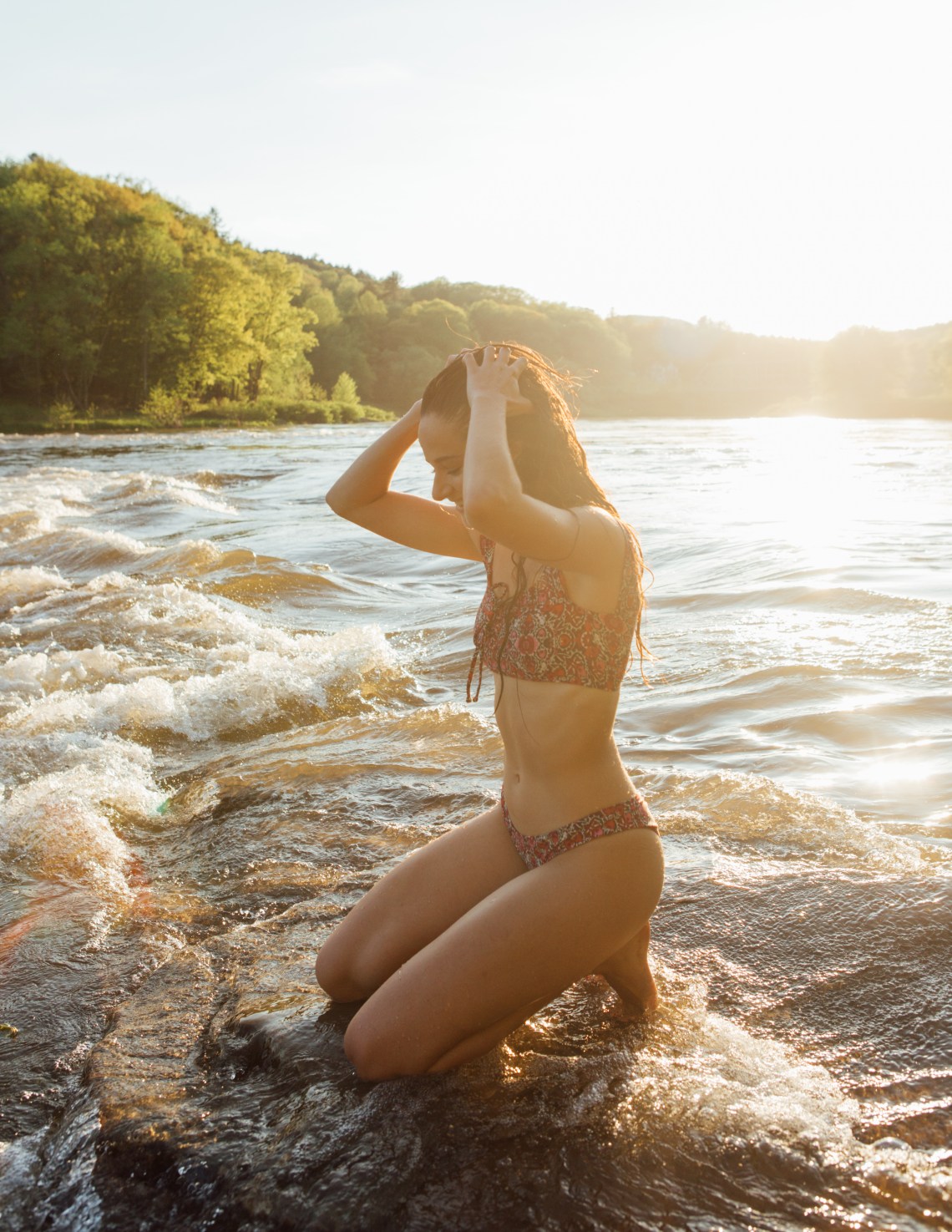 In a pool. In a lake. In the ocean. At a natural spring. Wherever you can, provided, you know, that you actually can swim (The last part is very important. Please don’t ignore).

You’ll see the benefits immediately. Not only is swimming one of the lowest impact forms of exercise—while still activating the whole body—it is, as I said, an immersive transcendent experience akin to meditation. It is impossible not to get something out of the silence, the repetition, the staring at the line on the bottom of the pool. Me, I like the sound and pressure I feel in my ears as my head goes in and out of the water. I like the way my goggles fog up and reduce my visibility to just the necessary amount. I like the feeling of the flow state when I hit just the right speed for just the right distance. I even like the mental math I sometimes do in my head to come to terms with the monotony…a mile isn’t counted to 72, it’s 7 sets of 10. And 4 laps into 10, means I’m almost done with this one and then I’ll get to start the next one…wait, what number am I on again?

Lots of people smarter than me have propounded the benefits of swimming. Follow the athlete and podcaster Rich Roll on Instagram and you’ll see him bang out a lunch swim of 5,000 yards. He has said that “submerged, the idle chatter of the monkey mind recedes. Each stroke, each lap is like a metronome, lulling me into a calm state of presence. When my swim is complete, I have an inescapable feeling of gratitude, with a light dusting of accomplishment.” The writer Robert Greene swims 1.25 miles multiple days of the week as a way of both breaking up the tough work of writing and toughening himself up to be able to do it. When he was president John Quincy Adams would swim in the early mornings in the Potomac River (can’t do that anymore—though Theodore Roosevelt used to swim nude in the river as well). Oliver Sacks picked up swimming from his father, and they both referred to it as the “the elixir of life.” The author Ruth Fitzmaurice has described swimming as a kind of “reset button.” “You’ll never regret a swim,” she once said. “You’ll always feel good coming out of that water.” 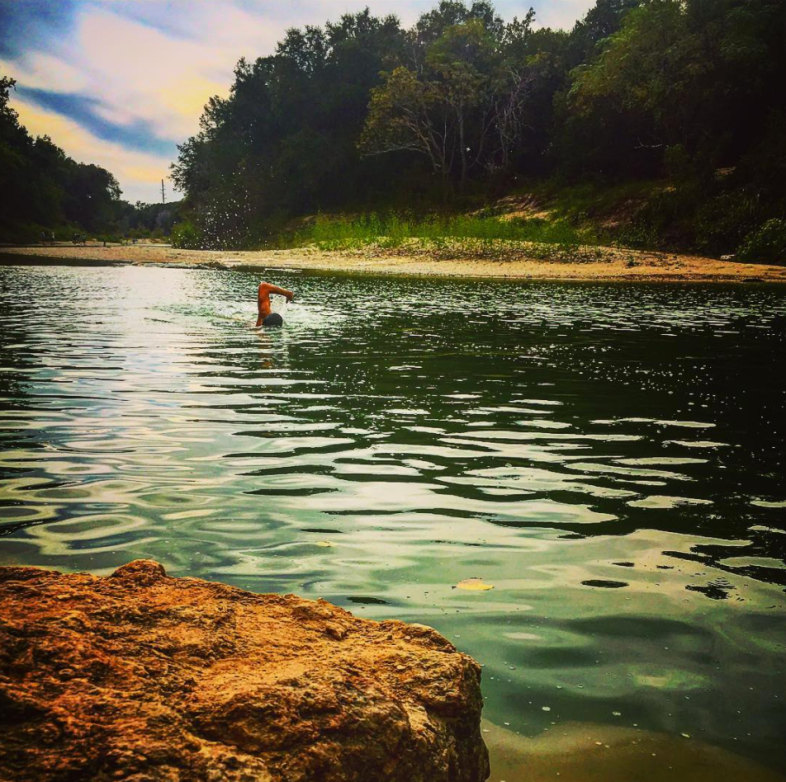 But meditation is more deliberate than this, you might say. It’s not just about getting some quiet time, it’s also about intentionality, about stilling the mind and having a mantra. I get that. For me, the solution to this problem was quite unintentional. I have tattooed on my forearms the phrases “The Obstacle is the Way” and “Ego is the Enemy.” When I swim in clear water, they are my mantras. With each stroke I am essentially thrusting them in front of my eyes and forcing myself to think about how I might overcome difficulties I face and how I might reduce and disassemble my ego.

I love running and there’s no question that it provides many of the same benefits, yet I always leave a swim better off than I do a run. Perhaps that’s because running has fewer defenses against the intrusions of the world. There are the stoplights and the honking cars. Our phones and our iPods used to be separate devices but the distinction has merged and the willpower to switch the phone into airplane mode has waned. Besides, what if we want to look at Google Maps? What if there is an emergency? What if someone is trying to reach me?

Not that these technologies aren’t coming to the pool either. When I look over and see a swimmer in the next lane with waterproof headphones I think, “Icarus! You are going to ruin this for yourself if you’re not careful.” The new Apple Watch is waterproof, and originally I was quite alarmed that it would be an intrusion. I’d fling it out of the water if it was but instead I’ve found that tracking my laps digitally means I don’t need to count as much, which means one less thought in my head. I shake my head at other “inventions” too. What are you swimming with fins for, friend? What’s with that ridiculous snorkel? To each their own, I guess.

One last story, one last sales pitch, I promise. Earlier this week I was walking out to the pool at my gym and a fan stopped me as I was getting in the water. “Are you Ryan Holiday? I just read Perennial Seller.” I thanked him and started my swim. It occurred to me though, about halfway through, just how much of that book I had written in the pool, in the middle lane, which I always prefer because there is less to bump into. Not writing consciously of course. I would head out to swim precisely when I was tired of writing or helplessly stuck. Yet it would always seem to be that the swim would unlock whatever door I was struggling to get open or some insight would creep into my brain that would be perfect for that spot in Chapter 3 that I hadn’t considered before. My writing wasn’t just enabled and encouraged by the clarity I had after my swims, but in fact, the process of swimming itself was a writing tool.

So anyway, from one person to another—from one person who can’t seem to sit still long enough to meditate to another—that’s my trick: Go for a swim. Maybe not every single day but incorporate it into your weekly routine at the very least.