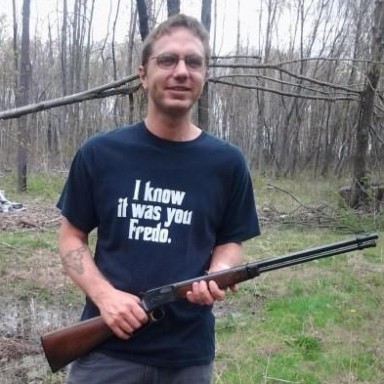 Psoriasis is little red dots or slight coloration that sometimes flake that appears on your skin.

According to science psoriasis is your skin cells growing at a rapid rate, faster than the surrounding cells. It is like you are Wolverine, your skin grows back quicker than normal, but unlike Wolverine, it doesn’t return to a pristine Hugh Jackman state of perfection.

Instead it is red and sometimes even flaky.

Scientists believe, but aren’t sure, that psoriasis is caused when the immune system overreacts to something it considers toxic, which makes the skin cells grow faster.

3. I first started getting psoriasis around the age of 26.

It was when I worked at a steakhouse as a cook. I was eating a lot of beef and white bread because it was free. Somebody would mess up a steak or burger at least twice a day, and boom, I had a free meal. I ate beef and white bread almost everyday for two years. Not a good choice.

Red spots starts showing up around my eyelashes and above my lip. Then they started flaking and getting gross, then it started in my hair, little crusty bumps. I didn’t know what to do, I didn’t have health care, so I couldn’t go to the doctor. And it wasn’t that bad.

During the next summer I played a lot of basketball outside with no shirt on and it went away. Getting a tan apparently makes psoriasis disappear. But I was also thinking, oh it goes away in the summer, who cares.

I went back to college and started drinking black coffee twice a morning and feeling stressed out. I think the black coffee and stress made the psoriasis return. During that winter it got really bad. The red dots became huge and dry, it felt like my skin was made of rocks. I kept putting lotions on it recommended by some of my female friends, all of which contained alcohol and fragrance, which actually made it worse. When I would reach up to grab things, the dots would crack and bleed.

At this point, I was still putting the wrong products on. It kept getting worse and worse. Then the worst thing happened. I had to take two math classes in the summer at 8 in the morning, which lead to me drinking more black coffee and being super stressed out because I hate math. Seriously, I actually cried twice alone in my room doing those stupid math problems. The psoriasis then grew on my legs. I had a psoriasis spot as big as a baseball on my thigh. I had dots all over, on my chest, back, legs, ankles, my hair, had tons of crusties. My elbows were destroyed, everyone was commenting about it. I was a walking disaster.

I made the decision I had to fix it, it had to be done. I spent over 50 hours researching psoriasis on the Internet, I found forum after forum, comments on products, personal experiments, dietary programs, people talking about taking vacations to the Dead Sea. It saved me, to know there was a community out there, going through the same thing.

I was doing multiple regression analysis in statistics class at the time and learned, to ascertain an answer from a thousand different opinions on one thing, you have to figure out what all the opinions have in common. Basically this is what the opinions said: don’t eat and drink garbage, don’t use lotions with fragrance and alcohol, tan, and tar.

See, I was a person who loved garbage food. I was raised on garbage food. My mother is a master of garbage food. I grew up drinking three cans of soda a day, eating a bag of potato chips, drinking black coffee, eating a candy bar, ice cream, and I probably threw in some cheese somewhere. The typical American diet.

I was really scared to eat differently — like actually scared. How could I ever live without disgusting food and Pepsi on a daily basis?

Then I had to tan. I had spent my life making fun of people who tanned, and especially men who tanned. But I came to enjoy it. I find it so relaxing, I fall asleep now when I tan.

I changed: I started tanning four times a week, bought lotions without fragrance and alcohol and new shampoos. I stopped eating so much garbage. I lost 15 pounds in three months. Think about it like this: if you lose 15 pounds after you stop eating garbage, that means 15 pounds of you was garbage — like 15 pounds of your body were cells made of garbage food.

After three years of changed habits, my psoriasis has almost all disappeared, and what is left is barely visible. I still see it in the mirror almost everyday. I stare at the red colorations on my face, and just fucking hate my life. But I think most people don’t even notice it anymore, and to my surprise, no girl has ever been bothered it.

I am still very embarrassed by it. Last summer I went hiking with a girl and it was 110 degrees, and she kept telling me to take my shirt off, and because I still have some on my stomach, I wouldn’t remove my shirt when we were hiking, and I just looked stupid and weird. And when we made out, I wouldn’t let her stick her hand under my shirt. It took two months before I let her see my stomach. And she didn’t even care. So, yeah, it bothers me.

4. Here’s my diet and the list of products I use:

Nothing sold in a convenient store, all that is garbage.

No beef or cured pork.

Coffee that’s diluted with an inch of milk. When I’m at home, I use coconut milk.

IPAs and hard ciders are the only alcohols that don’t trigger my psoriasis. I have read online other people who say IPAs do not cause outbreaks either. If I drink a Bud or Coors or whiskey, my skin gets bad immediately.

I drink one to two cups of detox tea a day.

Vitamin B and C

NEVER let a shampoo with fragrance touch your scalp. This includes Head and Shoulders.

Buy MG217 tar shampoo. Do not buy the generics, spend the extra money.

Buy Dermarest and its generics

Alternate between those two shampoos throughout the week. My scalp is completely clear now.

If you can get avocado oil, cover your scalp with it and leave it on for an hour, then wash out. Your scalp will feel really good after that.

Nothing with fragrance or alcohol.

Use only Aveeno and Eucerin. Their generics are okay.

Apply Eucerin or a generic form three times a day.

Psoriasin Gel, apply on an area three times a day. But do not go into the sunlight after, or that part of your body will look like a zombie.

Noah Cicero is the author of The Collected Works Volume 1, and Go to Work and Do you Job. Care for Your Children. Pay ...

Can I Have It All And Still Have My Marriage?

8 Things Only People With Psoriasis Will Understand