Author of the memoir "The Young People Who Traverse Dimensions While Wearing Sunglasses".

The more we shame her, the bigger she gets. At this rate, she’ll be the biggest “slut” we’ve ever seen.

The world is his sexual oyster.

If you’re a small-minded yokel who can’t stand to see two men holding hands and loathes watching that short-haired lady dancing on her daytime TV show, Barilla is looking for a customer just like you.

“The Hobbit”: Because you can seriously read this whole damn thing in a Sunday afternoon. What’s stopping you?

It’s not just that J.K. Rowling can’t stop telling her own stories. It’s that we don’t want to let her.

They say that 10 to 15 percent of women have never experienced an orgasm, but that number is about to be zero.

“I’ve paid more to be dumped than any man alive.”

Nico Lang is a former producer at Thought Catalog, as well as the former correspondent and blogger for WBEZ (Chicago’s local NPR affiliate), the Co-Creator of In Our Words and a graduate student in DePaul University’s Media & Cinema Studies program. Lang is the Co-Founder of Chicago’s Queer Intercollegiate Alliance and a columnist for HEAVEMedia. At HEAVE, Nico writes film reviews and talks about nerd stuff on a weekly podcast called Pod People. Elsewhere in podcasting, Lang is the former host of Broad Shoulders, a monthly podcast for Chicago’s Live Lit community. Nico is also a contributor at the Huffington Post and has been featured in the Washington Post, Chicago Tribune, The L.A. Times, The Guardian, XOJane, IndieWire, The New Gay, on NPR and their mother’s refrigerator. Follow Nico on Twitter @Nico_Lang or on the Facebook. 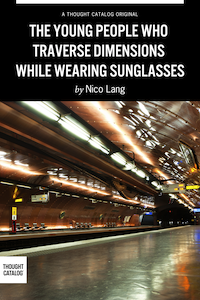